Winter is fast descending upon China, and with it, thick clouds of smog. Last week, officials shut down schools and major roads in the northeast city of Harbin after air pollution there reached dangerously high levels. For days, the city and its 11 million inhabitants were at a standstill; streets were desolate, businesses were closed, and visibility dwindled to just 65 feet. At the height of the crisis, pollution levels were more than 30 times the limit considered safe by the World Health Organization (WHO).

The smog has since subsided in Harbin, but the outbreak has revived longstanding debates across China, where rapid economic growth and a lingering dependence on coal have combined to deteriorate air quality at alarming rates. And although the government has made moves to address the issue with new regulations and emergency plans, some have begun taking matters into their own hands.

"It’s a very dramatic way of saying, "here’s the sun."

Last week, Dutch designer Daan Roosegaarde unveiled a new "electronic vacuum" capable of purifying air by magnetically pulling smog particles to the ground. The idea, he says, is to eventually deploy the device at public parks across Beijing, carving oases of clean air and sunshine out of the country’s smog-plagued metropolises.

"It's a very dramatic way of saying, 'here’s the sun,'" Roosegaarde says. "Here's the new world, why should we accept the old world?"

Roosegaarde created the vacuum in collaboration with Environmental Nano Solutions (ENS) Europe, an air-cleaning technology company, and Bob Ursem, a scientist at Delft University who developed the electromagnetic system underpinning it. The "vacuum" consists of a series of electrodes connected to a high-voltage power supply and placed a few centimeters above the ground. This creates a weak electrostatic field that imbues all nearby air and smog particles with a positive charge. A grounded device then pulls these particles to the ground, where they can be collected and disposed as normal waste.

The project is still in an early phase of development — Roosegaarde says he came up with the idea while looking at smog clouds outside his Beijing hotel room window — but the designer has already developed a working prototype, and last month struck a deal to begin testing it in a Beijing public park within a year.

In indoor tests, the system created a cubic meter of purified space inside a smog-filled, 25-square-meter room, and ENS says the device can purify 28,000 cubic meters using less energy than a typical incandescent light bulb. It can also purify air amid wind speeds of up to 13 meters per second, but scaling it up — and preventing purified air from being instantly polluted by incoming smog — may prove challenging. 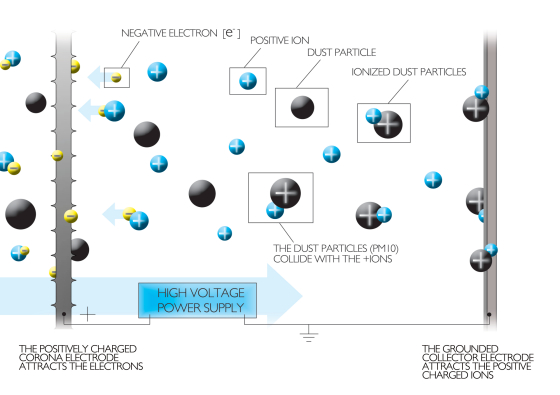 A diagram of the chemistry behind Roosegaarde's smog system. (Image credit: ENS Europe)

"I am actually very skeptical of this project," says Chi Jen-Yang, a research scientist at Duke University who has written extensively on pollution and energy policy in China. He notes that electromagnetic dust removal has proven effective in indoor settings, though applying the same techniques outdoors would require a much stronger electromagnetic force, which could damage electronic devices and credit cards. Without a strong electromagnetic field, Chi says, the system would likely have "little benefit."

Roosegaarde readily admits that the vacuum isn't a solution to China’s smog problem, and acknowledges the challenges involved with introducing it outdoors. He has a history of pursuing bold projects, as well, including "Smart Highway": an initiative to illuminate road markings with custom-developed photoluminescent paint, rather than streetlights.

To him, the smog project is as much about creating green spaces as it is about recasting environmental debates within a more social context.

"This is not the real answer to smog."

Yet ENS is intent on commercializing the technology and expanding it beyond public parks, noting that the same principles could be used on factory exhaust stacks, road equipment, and indoor spaces. "We don't feel it's just an awareness project," says Lia van de Vorle, ENS Europe CEO. "We want to make it happen worldwide."

And they're certainly not the only ones working on high-tech solutions. Earlier this year, researchers from the Eindhoven University of Technology successfully tested smog-absorbing concrete slabs, demonstrating their ability to remove nitrogen oxides and other pollutants from the air. Similar technologies have already been deployed on sidewalks and buildings in London, Mexico City, and Chicago. 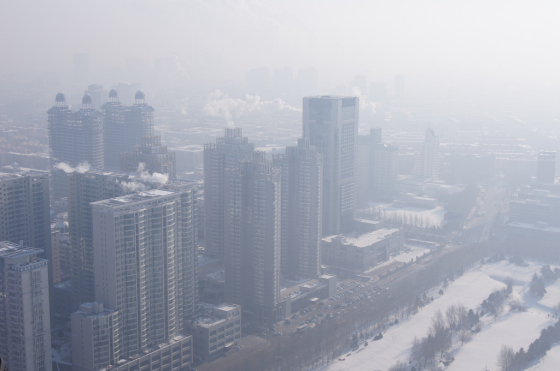 A view of Harbin, China, which was brought to a standstill last week due to dangerous smog levels. (Image credit: Fredrik Rubensson / Flickr)

Yet for all the promise that recent innovations may hold, experts say China's smog issues demand more drastic government action, pointing to the increasingly severe crises that the country has seen in recent years. In January, pollution levels in Beijing quite literally broke the scale, exceeding the index that the US embassy uses to monitor air quality. And recent research suggests that people in some regions are already starting to feel its effects.

A study published in July found that over the past two decades, coal pollution in northern China has cut life expectancy there by at least five years. On average, people living in the country’s southern regions live about 3.5 years longer than their northern counterparts, the paper reported. According to a study published in April, China's air pollution led to an estimated 1.2 million premature deaths in 2010 alone.

Pollution from electricity-producing coal plants are seen as the primary driver behind China's smog, which is why the country's colder northern regions see worse outbreaks during the winter, when people begin heating their homes. Although the government has made renewable energy a long-term priority, coal still provides an estimated 70 percent of China’s electricity. According to recent data from the US Energy Information Administration, China continues to burn nearly as much coal as the rest of the world combined.

"they realize that they have to take real action."

For years, critics have accused Beijing of ignoring the severity of its smog problems, though this year’s crises seem to have finally pushed the government to take stronger action. In September, the country released its most ambitious smog plan to date, aiming to reduce coal consumption in Beijing, Tianjin, Hebei, and Shandong by 83 million metric tons annually over the next four years. Following this month's outbreak in Harbin, the government announced plans to begin monitoring the health impacts of smog within the next five years.

"From a long-term perspective, we think these plans are actually quite comprehensive," says Huang Wei, a climate and energy campaigner at Greenpeace's Beijing office. She says the moves attack the "fundamental problems" behind smog, though she notes that China has struggled to implement environmental regulations in the past, and that the plans announced this year must be carried out with strong oversight and enforcement.

Transitioning away from coal will certainly take time, Huang adds, and it's unlikely that a single innovation will solve China’s smog crisis overnight. But the fact that the government is even acknowledging the problem is itself a sign of progress.

"The government and the public didn't know how severe the issue is, and how many cities are suffering," Huang says. "Now they realize that they have to take real action."