Fantastical 2 for iPhone combines your calendar and your to-dos

Fantastical 2 for iPhone combines your calendar and your to-dos

Flexibits today announced Fantastical 2 for iPhone, a new version of its trademark calendar app which brings an iOS 7-inspired design, Reminders support, week view, background refresh, and more. The app is a paid upgrade for all users, and hits the App Store today for an introductory price of $2.99, but will later move up to $4.99.

Fantastical on both Mac and iPhone has always been known for its slick, legible design, and Fantastical 2 is no different. The app draws a lot of inspiration from iOS 7, adding thinner text, a flat navigation bar, and a vibrant color-scheme while still maintaining the elements that make Fantastical great. The "Day Ticker" bar is still at the top of the app, for example, but with an important difference: today's date is on the left and no longer in the middle of the bar. "The [date] lens was more visually pleasing in the center, appealing to our love of symmetry, but iOS 7 has led me towards making an app that's better for the user," says Flexibits co-founder Michael Simmons. "The lens being on the left is definitely function over form, since you care more about the days ahead than the two days before."

This choice embodies most of the very utilitarian changes made in Fantastical 2, like the addition of a Maps preview inside events, a tasteful implementation of week view, and improvements to its natural-language-parsing engine. Another useful new feature is support for the iOS Reminders app, which lets you view to-dos inside the context of your daily agenda. Reminders isn't a great app, but its iCloud sync makes for a powerful compliment to Fantastical. It's even possible to add and check-off to-dos right from within Fantastical.

"I don't believe in upgrades at prices that currently exist in the apps economy."

Aside from these features, it's worth noting that Fantastical 2 is a paid upgrade that comes less than one year after its predecessor. App pricing is a hot topic today, with some people siding with Apple and saying developers should offer updates indefinitely (or at least for a couple years), and others arguing that customer expectations have been set too high by the App Store economy, where software costs a dollar. Simmons is in the latter group, but doesn't let the drama get to him too much.

"I don't believe in upgrades at prices that currently exist in the apps economy," he says, "and I don't believe someone is entitled to a discounted next version of an app because they bought the first one." Simmons learned quite a few lessons while developing apps for the last 15 years. One of those lessons has been that people who need your app will pay the price to buy it. Those who don't need it won't buy it. It's as simple as that, according to Simmons, and he doesn't have time for complaining. 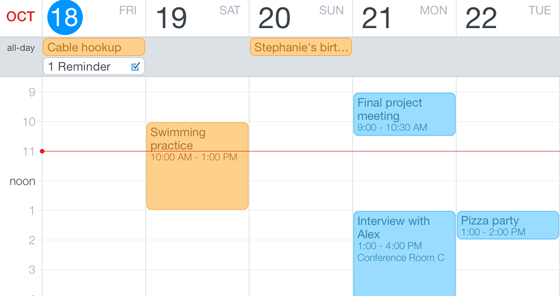 "Cheap pricing has led to disposable software," says Simmons, and it can't support a small business. Rovio can sell cheap software because its many games are bought by tens of millions of people worldwide, but for Flexibits, a team of two which makes just a few apps, there isn't much of an option, according to Simmons. With that said, Flexibits does plan to support Fantastical 1 for the foreseeable future, fixing any bugs that might arise.

Fantastical 2 stands alongside Sunrise and Calendars 5 as one the best calendars on iOS. If you need an iPad app, Calendars 5 is a great option, while Sunrise provides a more future-thinking, web-based take on calendaring that bundles in context about the people you're meeting with and flawless Google Calendar support. But if you need a pure replacement for the iPhone's stock calendar-app, Fantastical 2 is your best bet.