Barnes & Noble's Nook division seems to exist in a constant state of flux — one day it's being spun off, the next its construction outsourced — but the retail giant continues producing its E Ink readers unabated. Today it's announcing the Nook GlowLight, its new flagship ebook reader. It's designed to compete directly with Amazon's Kindle Paperwhite, and Barnes & Noble makes a surprisingly compelling case.

The device itself is incredibly light and thin. At 6.2 ounces, it feels almost empty — made of plastic with soft-touch edges, it's incredibly comfortable to hold any way you can think of. It's white and gray, a stark contrast to the Paperwhite; Barnes & Noble says it picked the color because it more closely mimics the margins of the book, and makes the screen's black text stand out even more. It's hard to argue with the effect: the device is really pleasant to look at, almost serene. It has the same E Ink Pearl display as the Paperwhite (Update: Amazon's Paperwhite is the newer E Ink Carta, not the Pearl), and a similar blue-white frontlight, though side by side the Nook's light wasn't as even as Amazon's reader. 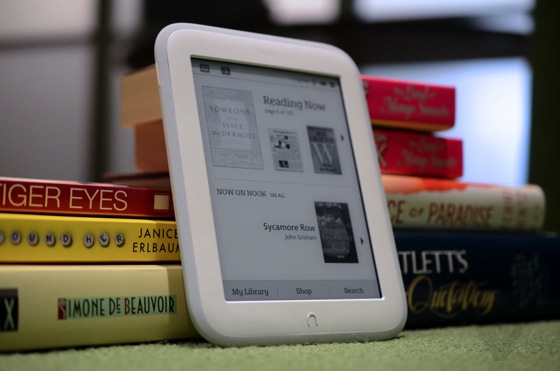 Barnes & Noble is after new customers

Barnes & Noble is primarily concerned with winning over new readers, those who have never owned an ebook reader before. So it's easing the transition everywhere possible, like virtually eliminating full-page screen flashes while you read and offering a one-click way to get back to your book from anywhere. The new Nook also comes with eight weeks of battery life, and a variety of cases that make the device feel a little more like a paperback book you can actually open.

Other than a couple of spec-sheet victories, the Nook is little different from the Paperwhite. Barnes & Noble is hoping its trump card is its decades of experience with retail stores, and with recommending books to hungry readers. Amazon's algorithms only go so far, its logic goes — people who just read a John Grisham book don't necessarily want to read more John Grisham books, and "what's good that I should read next?" is a question better answered by a person than a computer. So Barnes & Noble touts its human-powered recommendation system, which recommends books that are good, not that are related; it's a digital version of the curated tables at the front of its hundreds of brick-and-mortar stores.

Amazon, for its part, disagrees with the assertion that it's just an algorithm — it too employs plenty of human editors and curators, who spend their days reading books and picking what you should read next. Still, Barnes & Noble's decades of experience in stores and online is hard to match.

Whether that's enough to really challenge the Paperwhite, the de facto ebook reader, is hard to say. For $119 (with no ads, more than one spokesperson reminded me) it's a compelling buy, and the device itself is easily the best and most pleasant Nook yet — but pitting Barnes & Noble's retail footprint against the alluring, easy, ubiquitous power of Amazon is a dangerous game. Still, it's easy to imagine plenty of readers this holiday season walking into Barnes & Noble to buy a book and leaving with a Nook GlowLight — and that's good enough.