Here's to the middle ground. The commonalities. The compromises.

Standing in a Best Buy is an odd time for an existential crisis. Yet it's an almost certain occurrence, at least when you're there shopping for a laptop. More so than with any other product category, buying a laptop forces you to make all manner of decisions and prognostications about yourself. Do I play games? Will I want to play games sometime in the next four years? How much do I travel? How much will I travel? Am I going to be using Office much, or at all, or ever again? I have cable now, but am I going to become a cord-cutting Netflix aficionado sometime before I'm back here shopping for another new laptop?

Everything's a choice with laptops, everything a tradeoff. You want power, you're going to need a big, expensive, probably ugly machine. You want long battery life and a slim build, gaming's all but out the window. Good speakers and screens are hard to come by; so are great keyboards and trackpads. There's no such thing as having it all, no matter what you're willing to pay for it.

That's why the new 13-inch MacBook Pro is so intriguing. It's powerful, but it's not much thicker than the MacBook Air or your average Windows ultrabook. It has a great screen, and Apple claims it'll last for up to nine hours. On paper, it looks like the perfect balance: pretty portable and pretty powerful, in a pretty package. And it starts at $1,299, only $100 more than the same-size MacBook Air and $400 less than last year's model.

The 13-inch Pro is made for everyone. But for that kind of laptop, there's always a catch — a terrible trackpad here, a hideous heat or battery problem there. Last year it was the Pro's processor, which all too often appeared to be teetering on the edge of its capabilities. There has to be a catch this year too, right?

Apple's laptop design isn't perfect — the MacBooks still have sharp edges that dig into my wrists, and the silver aluminum chassis picks up dings and discolorations too easily for my liking — but it's close. It's consistent, too: the MacBook look hasn't changed in years. Still as sturdy and minimalistically handsome as ever, the 13-inch Pro is largely unchanged from last year's model. 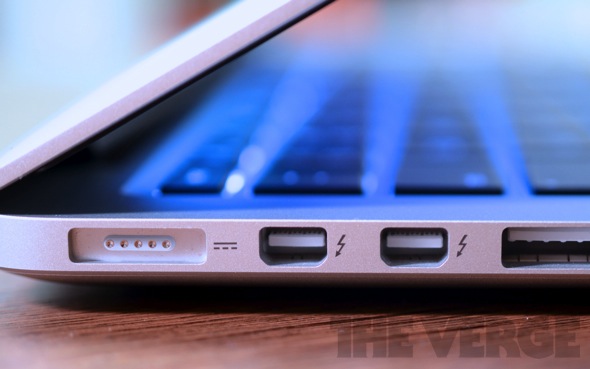 It still has a big, roomy, class-leading glassy trackpad, with responsive gestures and two-finger scrolling. It also still has a roomy, clicky black keyboard, with a customizeable backlight and slightly more travel than the MacBook Air. Neither has changed in years, and neither really needs to — other manufacturers still need to catch up. I do wish Apple would upgrade its speakers: audio comes through the Pro's keyboard, and is tinny and shallow.

The port arrangement is the same as the 15-inch model, and the same as last year's 13-inch Pro: with two Thunderbolt 2 ports, two USB 3.0 jacks, a headphone jack, and an SD card slot, there's little want for more anyway. All that's technically new is a second hole for a second microphone, which Apple says is for noise cancellation; I can't say for sure that it works, but it definitely doesn't make anything worse.

Slowly, the Pro appears to be inching downward toward the Air lineup. This year's model is a little thinner than last year's — 0.71 inches rather than 0.75 — and weighs 3.46 pounds instead of 3.57. It's only a hair thicker than the Air, and about a half-pound heavier; it's not nearly the sacrifice the 15-inch model is. 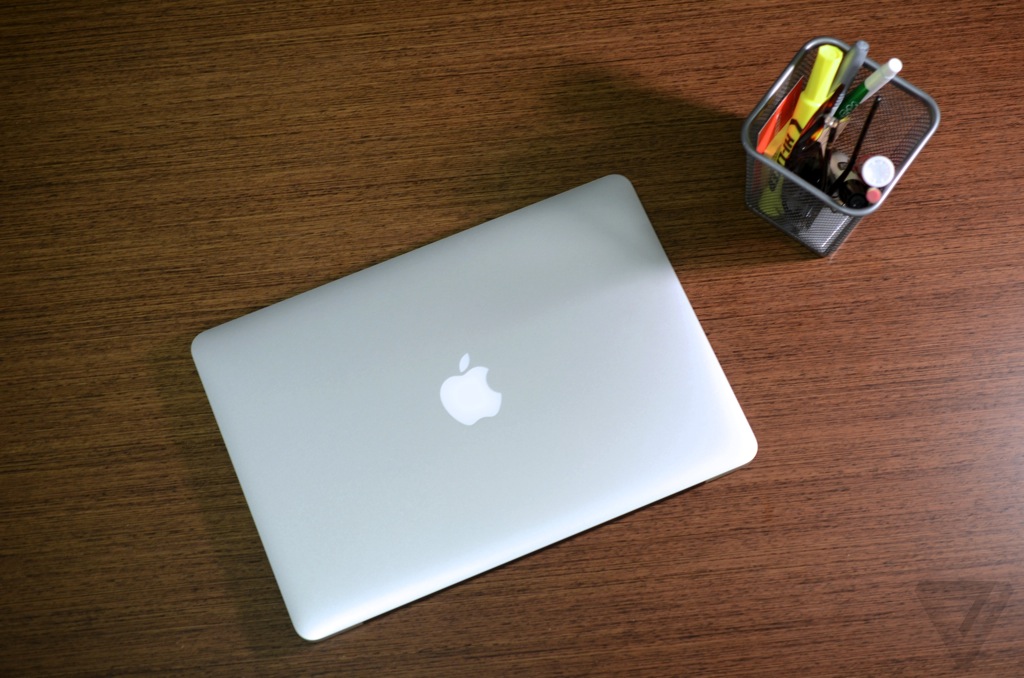 In exchange for the slight extra weight over the Air, the 13-inch Pro offers a gorgeous, 13.3-inch, 2560 x 1600 display. It's no longer the only beautiful display on the market — the Toshiba Kirabook, the Acer Aspire S7, the Samsung Ativ Book 9 Plus, and a handful of other notebooks offer equally stunning screens — but it's absolutely gorgeous. It's essentially taking a 1280 x 800 display and displaying four pixels in each spot, and the result is clear text, crisp lines and details, and a screen you really don't want to take your eyes off.

You trade half a pound and $100 for a stunning display

The problem is simple real estate — 1280 x 800 isn't that much screen space. I can see more on my 13-inch, 1440 x 900 Air than on the 13-inch Pro (though everything on the Pro is far nicer to look at). You can set the resolution to a maximum of 1680 x 1050, but it makes text squint-inducingly tiny, and since the display can't pack an even number of pixels into that resolution things look a little blurrier as well. And there are plenty of icons, websites, and apps that still haven't been updated for this new high-res world, and the things that haven't been optimized look pretty terrible. But be all that as it may, I'd trade the Air's screen for the Pro's without a moment's hestitation.

My only concern with making that swap would be that the Air's processor and graphics card can't handle pushing that many pixels. Last year's Pro barely even could. But this year, the Pro's much more ready for the task. 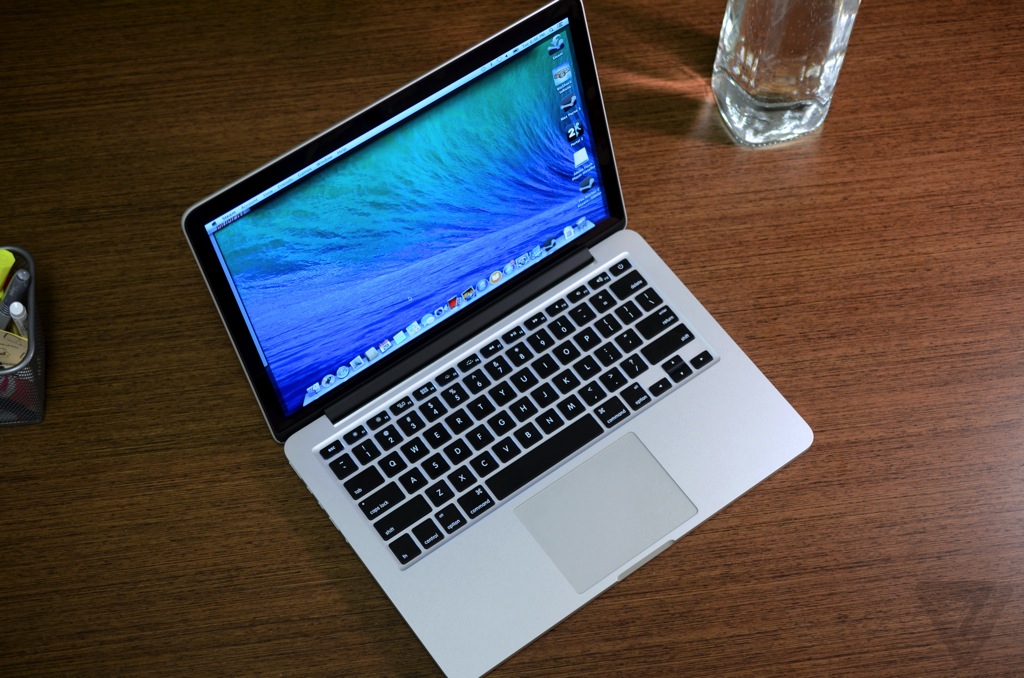 Considering the 13-inch MacBook Pro in the same class as the 15-inch model I reviewed last week is almost unfair. That machine was a beast, a gaming and productivity powerhouse — the 13-inch Pro is not. My review unit is powered by a 2.4GHz dual-core Intel Core i5 processor, one of the latest-generation Haswell chips, along with 8GB of RAM and 256GB of solid-state storage. Configured this way, the 13-inch Pro costs $1,499; for $1,299 you get the same processor, 4GB of RAM, and 128GB of storage. You can also upgrade to 512GB of storage and a 2.6GHz processor for $1,699, and there are configurations up to 1TB of storage and 16GB of RAM. Since this is a computer you'll have for a while, and since none of the components are easily upgraded, it's worth spending a little more now.

Budget carefully when you're picking a MacBook Pro

One thing you can't customize are Intel's Iris graphics, which are responsible for constantly powering the 13-inch Pro's pixel-rich display. As with last year's model, I noticed a distinct difference between it and the Iris Pro-powered 15-inch Pro, and especially compared to the larger model with discrete graphics (an Nvidia chip that isn't an option at 13 inches). Heavy websites like The Verge stutter occasionally, in a way that's so familiar to my Air as to be unnoticeable, but that can't compare to the buttery smoothness of the larger Pro. I was able to play two 1080p videos side by side without issue, but a third would occasionally make another jerk through a few frames. 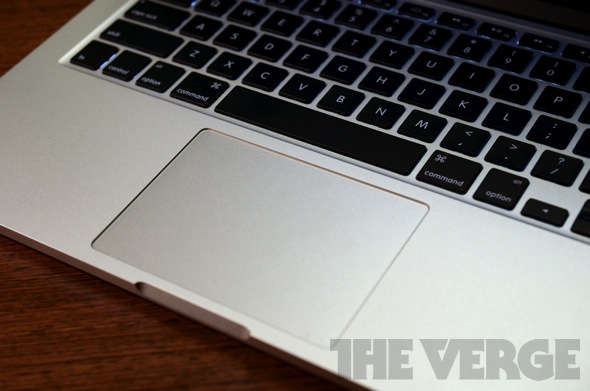 In everyday use, the Pro feels roughly like my Air. With a GeekBench score of 6,303, it's also far closer to the Air (6,057) than to the larger Pro (13,503). It's just perfectly competent and efficient, and that's plenty. It boots in about 15 seconds, and resumes from sleep almost instantly. My daily routine involves a dozen or so tabs, YouTube, Rdio, occasional gaming or Netflix, and perpetual Command-Tabbing between 10 or 15 apps. It handles all of that, and even some image or video editing, without a problem.

I could even play Portal 2 (on the subway or anywhere else) without problems at medium settings, though it's not a particularly intensive game. At high settings, Bioshock Infinite stuttered badly enough to give me a headache, but it became playable at lower settings before graphics got too bad. The Witcher 2 was basically unplayable any way I sliced it. During all three games, the Pro got a little warm and very loud, which almost never happened otherwise. This is not a gaming laptop, and any serious gamer should look to Windows machines anyway — from the Alienware 14 to the Razer Blade true gaming power, and most of the games, are reserved for Windows users. But for everything from movie watching to movie making, the 13-inch Pro holds up nicely.

I never had the overwhelming sense of power I got from the 15-inch model, as if I could solve world hunger or topple foreign governments with the spare processing cycles in my computer. And if you want a device with headroom, that's going to be plenty powerful for years to come, the 13-inch Pro probably still isn't your best option. But for most people, for most uses, what in practice amounts to a MacBook Air with Retina display is an excellent idea.

And here's the best part: even with all those pixels, the 13-inch MacBook Pro still lasted 10 hours, 7 minutes on the Verge Battery Test. That may not be the 13 hours and 29 minutes the Air lasted, but it's more than almost any other laptop, and more than enough to last you a cross-country flight's worth of movies or through a daylong meeting. Part of that is due to the ultra-efficient Haswell chips, part due to the power improvements in OS X 10.9 Mavericks, but whatever the reasons, the net result is a Retina MacBook that can last all day and then some. 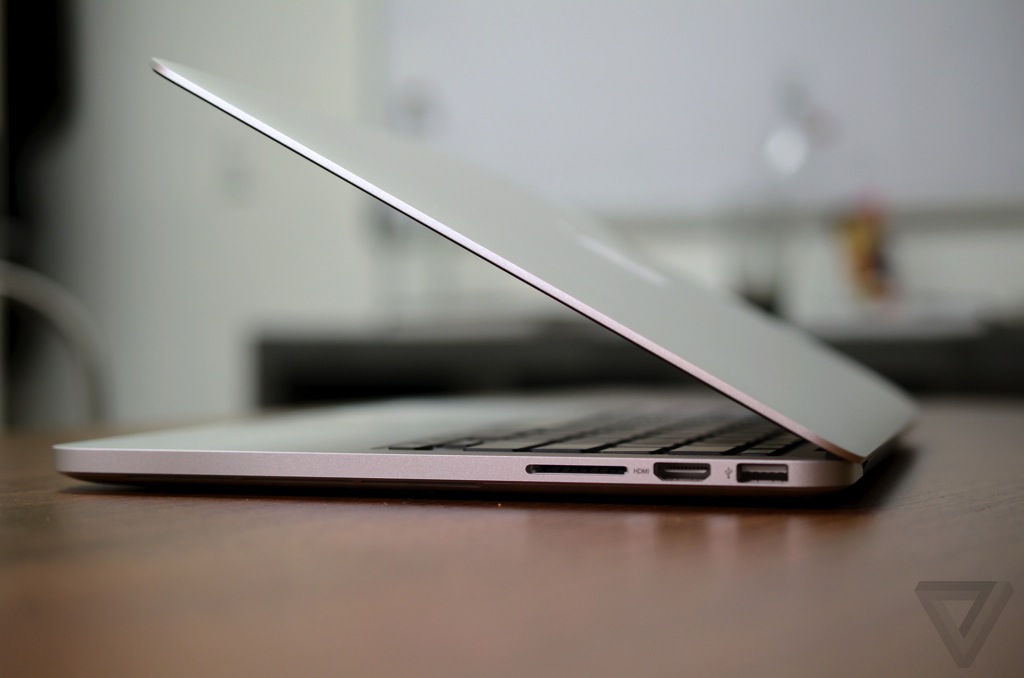 Not quite a perfect mix, but an excellent middle ground

In 2008, the $1,299 13-inch MacBook was the de facto Apple laptop. The Air was $1,800 and totally unreasonable for most people, and the 15-inch Pro was big and bulky and designed only for power users. The 13-inch model wasn't the cheapest computer, or the most powerful, or the longest-lasting, but it did everything well.

Five years later, we've come back around. The $1,299 13-inch MacBook Pro isn't the cheapest Apple computer (that's now the Air), or the most powerful (that's the 15-inch Pro), or the longest-lasting (the Air again). But it does everything well.

The primary question is whether you should spend $100 more than the comparable MacBook Air and get the 13-inch Pro. The calculation is simple: you trade a half-pound and about three hours of battery life for an absolutely stunning display and a handful of extra ports. (The display requirements negate the spec gains in most practical ways.) Personally, my laptop goes everywhere I go, and I'll take smaller and lighter any way I can get it. But for most people, it's going to be a tough call.

My guess? More than a few people will take one look at that screen and wind up leaving Best Buy with one less existential crisis and one more MacBook Pro.