Google's Nexus program has a simple goal: make the best, purest, most perfect Android phone. And, beginning with last year's Nexus 4, Google did all that at a remarkable price, charging with no strings attached what most carriers and manufacturers would charge with a two-year contract. The Nexus 4 had a few issues — its missing LTE support chief among them — but overall it was an excellent phone, a refined and usable example of Android's prowess and possibilities.

That's why Google's new device, the Nexus 5, has been so remarkably hyped. It's been leaking for months, speculated about for much longer — and today Google's finally pulling the veil all the way back on the device that it hopes will show the world what Android can really do. The Nexus 5 is here.

The Nexus 5 is available today at the Google Play store. It's a fully unlocked device, priced at $349 with no contract for the base 16GB model. The 32GB version prices in at $399, and both are available in white and black. It will work across a wide array of carriers — in the US, it will work on everything except Verizon.

The Nexus 5 is as surprisingly inexpensive as its predecessor. Unlike its predecessor, though, it manages to actually support LTE, a complete necessity in this day and age. But releasing a flagship-caliber phone at that price comes with trade-offs, and Google had to pick carefully what it could and couldn't compromise with the new Nexus.

The good news is that the new Nexus 5 is largely based on the same guts as the LG G2, a phone that is pretty great if you can get past its lackluster software. But where LG added plenty of unnecessary cruft in its eternal quest to keep up with Samsung, the Nexus 5 is pure, unadulterated Android, running KitKat. The Nexus 5 has a blazing Snapdragon 800 processor and a crisp 5-inch display at 1080p resolution. Luckily, Google kept the bezels around the screen to an absolute minimum — not unlike the Moto X — meaning that it manages to not feel wildly gargantuan when you hold it in your hand.

That's the good news. Unfortunately, the bad news is that the Nexus 5's build quality isn't quite up to the kind of watch-like craftsmanship we've come to expect on flagship phones like the iPhone 5S or the HTC One. It's unapologetically plastic, to borrow a phrase that Apple has used to describe the 5C. The back has a very nice feel to it, however, with a soft-touch finish that's very grippable — Google calls it "silky," and that's actually a fair description.

The back is also slightly curved and non-removable, but the edges where it meets the rim of the phone are squared off, bordering on sharp. If you've ever held a Nexus 4, the Nexus 5 will feel a bit familiar — albeit bigger and, curiously, lighter. It's only 130g, which is 9 grams lighter than its predecessor, and it really feels it when you pick it up. It holds a 2300mAh battery, which we're hoping will hold up to a full day's use. The display is Gorilla Glass 3, which means it's relatively thin and lightweight as well, but presumably very durable.

Will it hold up to a full day of use?

While the LG G2 has the dubious "innovation" of placing the buttons on the back, the Nexus 5 fortunately doesn't follow its lead. Instead, they stay in the same place as they are on the Nexus 4: power on the upper right, volume on the left right. The buttons are made of ceramic, though the benefits of that aren't entirely clear. The earpiece speaker is a curiously tiny circle in the top-center of the device, and on the white version it's actually white, helping you position the device as you hold it — since it's a monolithic black slab with the same curves on the top and bottom, it's helpful, if a little weird looking.

In all, the Nexus 5 feels more utilitarian than beautiful. While finding beauty within that utility is certainly within the realm of possibility, it takes some effort. 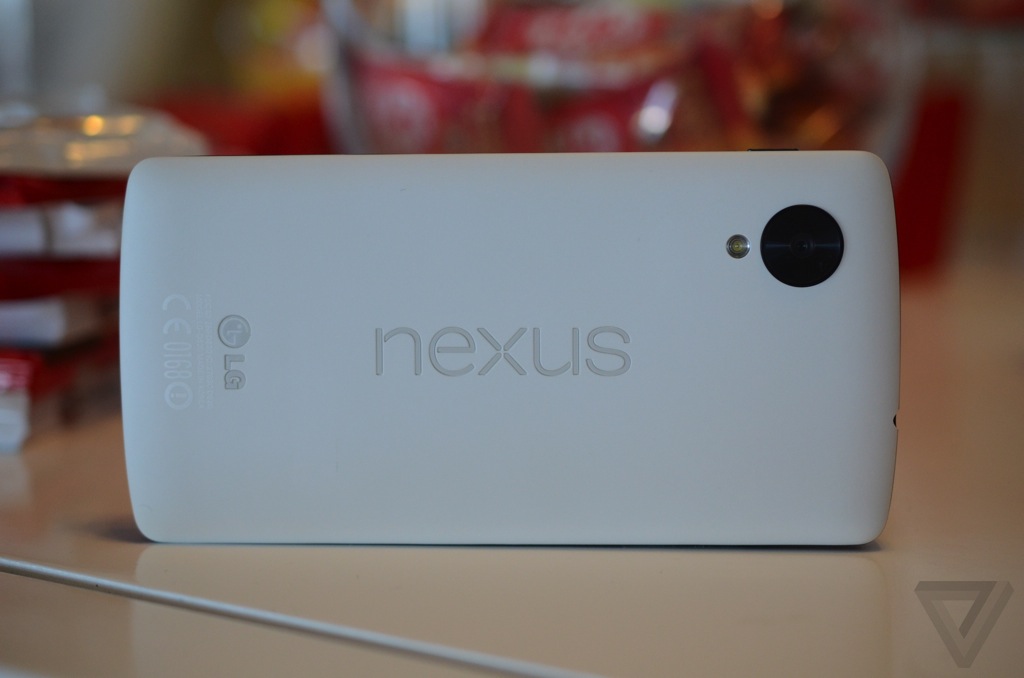 The big question with nearly every Nexus phone has been the camera — since at least the Samsung-manufactured Galaxy Nexus Google has talked big game but the actual results have been disappointing. We haven't had enough time with the Nexus 5 to give it a full verdict, but our initial impression is that this won't make iPhone 5S or Lumia 1020 owners think that they're missing out. It's an 8-megapixel shooter with optical image stabilization, but camera specs on paper and camera performance in the real world are wildly different things.

One of the big features in KitKat, at least on the Nexus 5, is something Google calls HDR+. It's a pretty standard HDR feature — silently using a burst mode to take a bunch of photos and composite them together. We tested a few shots with a super bright window in the background and they came out better than we've come to expect from Android phones — but of course anybody familiar with said phones knows this could be damning the camera with faint praise. 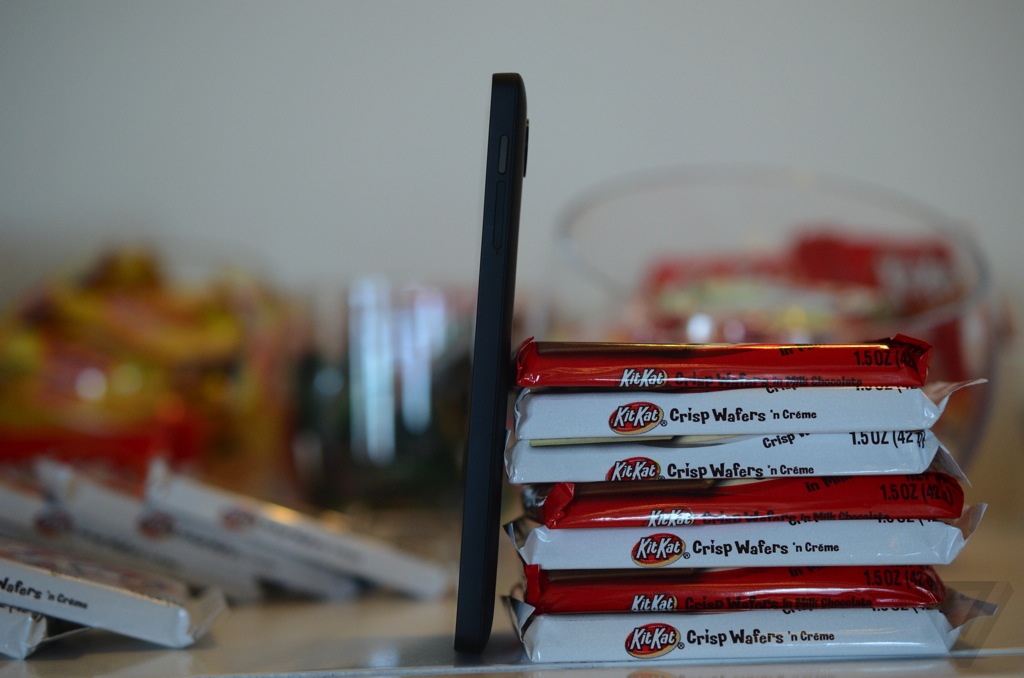 Each Nexus is meant to be a showcase for the latest version of Android, and the Nexus 5 is no different. Google made a big deal over the (re)branding of Android 4.4 as "KitKat," but unless you've been paying very close attention to the development of the platform you can be forgiven for not knowing what's new here.

The camera could still be a concern

The biggest change is probably the launcher, which now integrates Google Now with a quick swipe to the left (You can still get to Google Now the old way — swiping up — as well). It can also can be activated just by talking — similar to the Moto X, but in this case the command is simply "OK Google."

Visually, KitKat is a little cleaned up. Google has excised the Widgets tab from the app drawer, simplifying that experience immensely (you can still long-tap to add widgets). The icons are bigger and nicer, but more importantly the status bar and button bar on the bottom are now translucent, showing content underneath them in certain cases. The wallpaper bleeds under them — as does Google Now — and developers can also set apps to go full-screen, hiding both entirely. A new, condensed version of Android's custom Roboto font helps readability, but truthfully the visual changes here are tweaks, not overhauls.

Hangouts now can send and receive SMS messages, and though SMS is completely integrated, Google Voice still isn't. If you've been waiting for that massive step forward, you need to keep waiting.

Though it certainly doesn't apply to the Nexus 5, the other big change is that KitKat is now able to operate on low-end devices. It's possible, however, that even high-end devices will benefit from the cleaning and tightening Google had to do the OS. Chromium, the web engine behind Chrome, is finally the web engine that powers third party apps in KitKat, which will hopefully make more apps faster and better-looking.

In terms of performance, it's honestly difficult to give a final verdict. Everything seemed crazy fast when it came to launching and switching between apps. That's often the case with a fresh Android phone, however, so we'll need to spend more time with the device before we can render a decision. 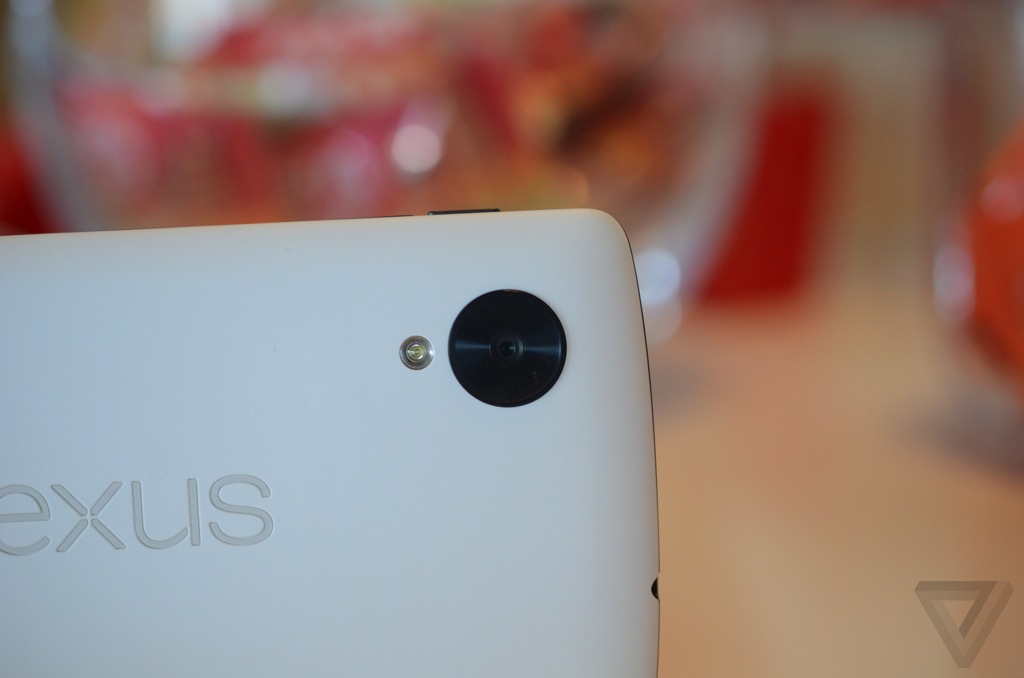 Speaking of rendering, the old bugbear of Android has always been scrolling performance. Especially in Chrome, there's always been a sense of lag that seemed completely out of place on top-tier devices. On the Nexus 5, we're very sad to report that the situation doesn't seem any better. There is still not a one-to-one relationship between your finger and the screen, and it's still crazy-making.

Google has tried a few different strategies to move its Nexus devices into the mass market — from overly ambitious attempts to overtake carrier stores to making deals with the likes of Verizon and Sprint that compromised the spirit of what Google actually wants for the Nexus program.

It seems as if the company finally landed on a formula with the Nexus 4: make a pretty great device and then sell if for way less than anybody else. With that device, the company wasn't even able to keep its online store up and running to meet the demand. Hopefully Google will do a better job with the Nexus 5 — especially since it hews to the same idea of selling a powerful phone off-contract for hundreds of dollars less than the competition. And this year the Nexus can compete spec-for-spec with the best that's out there — barring questions about the camera.

Overall, the Nexus 5 looks like a wildly capable Android phone. It's fast and big with a beautiful screen and all the accoutrements you'd expect on a flagship phone. As we said above, it has a lean, utilitarian aesthetic that doesn't quite feel beautiful, but is certainly workable and isn't without some charm. Like the Nexus 4 before it, we don't expect it will take the wireless world by storm — but we do expect a tiny slice of users to be very happy with what Google is offering.

Now iFixit has genuine repair parts for Google Pixels, from the 2 to the 6 Pro