At its event in San Francisco, in the midst of flashing some new hardware, Google also unveiled version 4.4 of Android, the long-awaited KitKat. It's much more than a marketing gimmick, or an excuse to make limited-edition candy bars in Paris — it brings some real change to Android, and some much-awaited integration among Google services.

Most immediately obvious are a handful of design tweaks to the OS, which make Android cleaner and simpler than ever before. The status and notification bar are now translucent, and they disappear completely when you're in a fullscreen app; there's less chrome across the entire OS, and more space on the Nexus 5's five-inch display for whatever you're doing. There's a new launcher, a new condensed version of Google's Roboto font, and a generally lighter and cleaner look to Android. It's not nearly as stark a change as iOS 7 was, and generally speaking KitKat still looks a lot like Jelly Bean, but the design directions feel very similar.

Google built the Yellow Pages into the dialer

The dialer looks different, and it's been totally re-thought as well: Google's essentially built the Yellow Pages into its dialer app, allowing you to search for a business or person and dial their number without ever having to figure it out. That kind of integrated search is pervasive across KitKat, which uses both search and Google Now to bring you more information than ever. Voice Search is faster, and offers a lot more feedback to guide you through the process of looking for something or sending you a text message.

Google Now, which now lives a left-to-right swipe away from your homescreen, is now able to send you information you might want based on your location, or on sites you visit frequently, or even TV shows you particularly like. And when you search, Google can now direct you straight to not only the appropriate website, but the right app; searching for recipes can lead you to that recipe in an app, or restaurants can send you right into OpenTable's app, reservation page open. "Our mission," says Sundar Pichai, Google's head of Android and Chrome OS, "is every time you pick up your phone, the information you want, in context, is right there." That's not complete yet, but Google's removing steps left and right.

Hangouts is messaging, and messaging is Hangouts

Hangouts is one of the key features of Android 4.4, far more integrated into the operating system than ever before. Where there was once a Messages icon, there is now only Hangouts — the app was just updated to integrate SMS, and work better for voice calling, and it's now part of the way you'll talk to other people on Android. Texting, instant messaging, even voice and video calling, are all now done through Hangouts – it's like a combination of FaceTime and iMessage into a single application. If you don't want to use Hangouts, of course, you can select your own default texting app in KitKat.

The Nexus 5 has a new improvement to the camera that could potentially make its way to other devices: HDR+. It's a standard High Dynamic Range process, taking multiple photos in a burst mode and then compositing them into a single image. In our testing it worked fairly well, and Google says that it has integrated a "new noise model" that can tell the difference between standard motion and noise on the sensor itself.

A number of KitKat's most important changes aren't designed to be noticed, though. They're under the hood improvements, tweaked and optimized to work on lower-end, lower-memory devices — KitKat appears to be a big step toward Google solving its fragmentation problem, by building an OS that works well on a huge range of devices old and new. Chrome uses 16 percent less memory than in Jelly Bean, says Pichai, requiring just 512MB of RAM. All of Google's apps have been optimized to use less memory — the task-switching UI is lighter and easier, among many other things.

KitKat is very much intended to solve Google's fragmentation problems

Pichai says KitKat is still "a cutting-edge operating system designed to run on cutting-edge phones" but that Google has made it possible to have a single version of the OS across all Android smartphones. "As we get on our journey to reach the next billion people," he notes, "we want to do it on the latest version of Android."

It might also make KitKat more amenable to devices like watches and other wearables, which Pichai hinted at a couple of times. But for now, the new operating system is available starting today on the Nexus 5 and on Android's open-source website; updates to other Nexus and Google Play Edition devices are coming soon. And if Google's really serious about ending fragmentation, and making search and Now a part of everyone's lives, KitKat might be everywhere sooner than you think.

Update: Google has released a full list of the new features in Android 4.4 KitKat, and there are even more exciting possibilities under the hood.

The company says that Android 4.4 can let any app act like an NFC smart card, meaning you might not need to have a phone with a secure element to tap-to-pay with Google Wallet or at your local Starbucks. There's built-in support for step detector and step counter sensors, so your phone can act as a pedometer without requiring apps developers to build fancy algorithms in order to detect when you're taking a step. The new Nexus 5 has those sensors built in. There's also a new API for IR blasters, so manufacturers can more easily build smartphones and tablets that can control your television and home theatre equipment, and a new screen recording utilty that can let you capture a video of what you're doing with your smartphone and store it as an MP4 file. 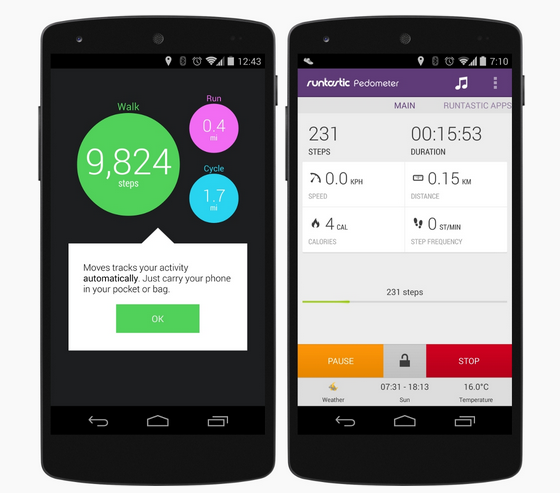 On the silicon side of things, Google says the Nexus 5 can play music for up to 60 hours on a charge thanks to a new audio tunneling feature: if a phone has a dedicated audio processor, Android 4.4 can use that instead of the standard application processor. Audio tunneling's only available on the Nexus 5 for now, while GPU acceleration also now works natively for RenderScript applications on the Nexus 5, Nexus 4, new Nexus 7 and Nexus 10. Google says it's working to bring both features to more devices "as soon as possible."

There's plenty more in the full changelog, including enhanced support for notifications, for streaming video, and a number of features that could help low-power devices (like smartwatches, perhaps) more efficiently transfer data, including a pair of new Bluetooth profiles and a new "sensor batching" system that allows a device's sensor to transmit fitness, location, and other forms of data in small batches, rather than constantly invoking the processor to keep track of everything. Read about all the new features right here.