LG and Samsung's new smartphones put design behind the curve

LG and Samsung's new smartphones put design behind the curve

Currently, smartphones almost universally follow a single form: a rectangular slab with a flat, equally rectangular display. In recent weeks, we've seen signs from LG and Samsung that things could be changing soon.

Earlier this month Samsung announced the aptly named Galaxy Round, a phone that features vertical edges curved towards you. The news was swiftly followed by LG’s announcement of the G Flex, which in contrast to Samsung's handset is deeply curved on a horizontal axis, casting the silhouette of a sleek techno banana. Both handsets are currently only destined for Korean shelves, however, and many have written off the advent of curved displays as yet another marketing gimmick. So why have two separate entities announced remarkably similar and yet totally different devices within weeks of each other? And which company, if either, got it right?

Both phones generate a "that’s different" impression that has long been missing from the industry. But is "different" necessarily good? Matthew Cockerill, associate design director at Seymourpowell, has his doubts. Curved-screen smartphones "are a solution looking for a problem," says Cockerill, who has a wealth of experience in product design and consumer electronics, including designing OLED TVs and Samsung televisions and monitors. "From a usability point of view, they don't really give much ... Perhaps [in the case of Samsung’s vertically curved Galaxy Round] it will curve around your leg, but I don’t think that really stands up as a main feature."

LG’s handset, on the other hand, undoubtedly doesn’t curve around your leg, unless you happen to have enormous pockets in which to place it horizontally. Instead, its maker is marketing the product as "a good fit for the face." The G Flex is perhaps the more striking of the two handsets; with a larger distance to curve, it truly looks different compared to most smartphones. But while the claims of ergonomic calling could be true, we’re in an age when our phones are more often looked and thumbed over than placed against our cheek.

"It’s not bringing huge user benefits," explains Simon Lamason, principal of design strategy at design innovation consultancy PDD, who for over a decade worked for Nokia and Philips as a senior product designer and design strategist. "It does bring some novelty … but it’s a case of ‘they can do it so they’ve done it.’ It’s very much a case of the Korean companies chasing each others’ tails."

The secret to LG and Samsung’s sudden rush to create a curved device isn’t a grand coincidence. Both companies are heavily invested in OLED display tech, which is used in smartphones from Samsung, LG, Motorola, and others. The progression from regular to curved and flexible OLEDs has of course been planned for years, but it’s only now that the displays are being mass produced.

The key to OLED’s newfound curvature is that LG and Samsung have swapped out the glass that sits behind the display for plastic substrates, allowing for more flexible — and less fragile — displays. The same technology that enables curved devices could one day allow for the creation of truly flexible devices — once the flexible components and batteries to support them are ready for the mainstream. LG tells us such battery tech is still several years away from a mainstream appearance, but that’s undoubtedly both companies’ end goal. 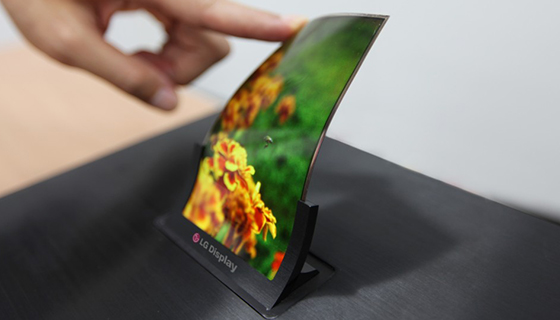 That’s the future, however, and the Galaxy Round and G Flex are our present. Neither handset appears to offer up much of a reason for its existence. In fact, Cockerill believes it’s the disparate formats themselves that reveal there’s currently no value in curved-screen smartphones. "If there was some key function that this fulfilled that was really compelling then I think both manufacturers would be driven to the same function." Instead, he argues, all the Galaxy Round and G Flex offer is a point of differentiation.

In recent years, gimmicks and differentiation have largely taken place away from product design. But it wasn’t so long ago that weird phones were coming from every direction — take Nokia’s insane history as an example. With the rise of the touchscreen, though, we've been left with an army of clones, all of which look like the modern equivalent of a Newton MessagePad.

"If you look at what a smartphone is now, in terms of what it does, it’s pretty mature," says Cockerill. "I can’t see anything that makes me want to move to a curved screen from a flat screen. It’s just a new technology that’s been applied to an existing product category, i.e. the rectangular smartphone."

"I can’t see anything that makes me want to move to a curved screen from a flat screen."

Despite their doubts over the first generation of curved screen smartphones, both Lamason and Cockerill agree that the technology has merit. The recent crop of curved televisions, for example, make more sense as you can fit a larger screen size in a shorter width when compared to a flat screen. For a single person sitting centrally, a concave screen has less visible reflections than a flat display. Even televisions aren’t without their downsides, though. "If it’s against the wall it’s going to stand off much more," says Lamason, "and if you’ve got people at different viewing angles then it’s not going to work."

The positives and negatives of curved televisions also apply to smartphones. In ambient light you’ll see fewer reflections, but when viewed from an off-center angle the screen will be less legible. The curve also makes these phones simply bigger: they take up more space.

Neither designer believes there’s anything particularly wrong with a curved smartphone — it’s just that there’s nothing particularly right. Many of the upsides of switching to a plastic OLED display, which are highlighted by a report from DisplayMate’s Raymond Soniera, aren’t tied to curvature. LG and Samsung could just as easily use plastics in their flat displays. So what should we do with curved OLED technology?

Product designers have been "dreaming of curved and flexible screens" for decades, says Cockerill. "Just google those words and you'll have all sorts of concepts." Now that they’re available, we shouldn’t be jamming them into smartphones without good reason. Instead, Cockerill would rather see companies and their designers focusing on asking a different question: what future product category could curved and flexible screens enable?

To steal Apple’s terminology, Smartwatches are "an area of intense interest" for tech companies, with virtually every major consumer-facing manufacturer rumored to be developing its own. Lamason believes smartwatches could be a good fit for curved displays, and says the technology might also have "applications for jewelry and monitoring devices," as it’s "conducive to making round objects that naturally fit to the amorphous shape of the human body."

Products like the Nike Fuelband and Fitbit Force could be ideal candidates for a flexible display. "You could have multiple home screens that you just scroll around your wrist, each displaying different things," suggests Lamason. "If it’s related to running like the Fuelband or Fitbit, could it show through color different things you’re doing? I think that’s much more interesting, where you can really use the flexibility of a screen to fit the body." Both designers also dream about the potential of foldable, rollable displays, and how they could one day transform consumer electronics.

Cockerill has a good analogy for the significance of curved and flexible displays to product design. "Look at architecture, and where it’s gone with the advent of curved glass … even just 50 years ago, the only glass that the architect really had was flat panel, and when you started to get curved glass and create glass in various compound forms, it allowed the designs to become a lot freer and move towards different things."

In 50 years, we may look back on the impact of flexible and curved displays on product design in a similar light. "Curved and flexible is incredibly valuable and has real potential," says Cockerill, "I just don’t think that potential lies in the present form factor of a smartphone."

Samsung's Galaxy Round is the first phone with a curved display