Dead meat: how to raise livestock in a post-antibiotic era

Dead meat: how to raise livestock in a post-antibiotic era

When will American farmers put antibiotic drugs out to pasture?

We've been warned for years that our reckless use of antibiotics threatens to render the drugs useless — ushering in a public health crisis that could see once-benign germs become deadly. But overzealous prescriptions for human patients are only one part of the problem: experts increasingly agree that antibiotics in animal agriculture contribute to resistant infections in people. And some are now investigating surprising techniques, from probiotics to vitamins to garlic extracts, to curb antibiotic dependency among meat producers.

Antibiotics are fed to farm animals in stunning numbers: a new report out of the Johns Hopkins Center for a Livable Future last week estimated that 80 percent of the antibiotics used in the US go to the animal agriculture industry. The industry uses some of those antibiotics therapeutically to treat an animal that gets sick. But more troubling is the rampant use of antibiotics, at low doses, in an effort to increase animal size and prevent illnesses from cropping up (especially in cramped, dirty factory farming environments) in the first place. "It's a simple equation," says Stuart Levy, a professor at Tufts University and president of the Alliance for the Prudent Use of Antibiotics. "The longer you use an antibiotic, the greater the number of resistant bacteria that develop. Animals receiving low doses on a consistent basis are just a perfect storm for that problem."

"The longer you use an antibiotic, the greater the number of resistant bacteria."

Such chronic antibiotic use on the farm carries serious implications for human health. Antibiotic-resistant bacteria that flourish in animal agriculture can spread through livestock workers, waterways, and soil. But most often, the bacteria make their way into the human body via food. In one 2010 study from the FDA, 29 percent of grocery store chicken breast carried bacteria that exhibited multi-drug resistance. And in a report released earlier this year, the Centers for Disease Control and Prevention (CDC) made it crystal clear that animal agriculture is behind that kind of contamination, noting that "scientists around the world have provided strong evidence that antibiotic use in food-producing animals can harm public health."

Despite such exhortations, progress to curb the use of antibiotics among farm animals has been resoundingly sluggish. The FDA has in recent years restricted the use of some antibiotics for animals, and issued voluntary guidelines on the responsible sale and administration of the drugs. "Guidelines just aren't going to do the job," says Sasha Lyutse, a policy analyst with the Natural Resources Defense Council, which has twice sued the FDA over the agency's handling of the situation. "What we need are real regulations and accountability to prevent producers from just going about business as usual."

"What we need are real regulations and accountability."

While the push for tougher regulations continues, some scientists are also investigating alternatives that would replace some, or all, of the antibiotics used in animal husbandry. Investigators with the USDA's Agricultural Research Service (ARS), arguably the leader in such work stateside, say they're racing to come up with safe solutions that can enhance animal growth, boost immunity, and treat illnesses without perpetuating resistance. "It doesn't matter whether you do or do not agree that antibiotics are overused in agriculture," says Cyril Gay, national program manager for animal health at ARS. "We're losing them. They are no longer going to work for animals, or for people." 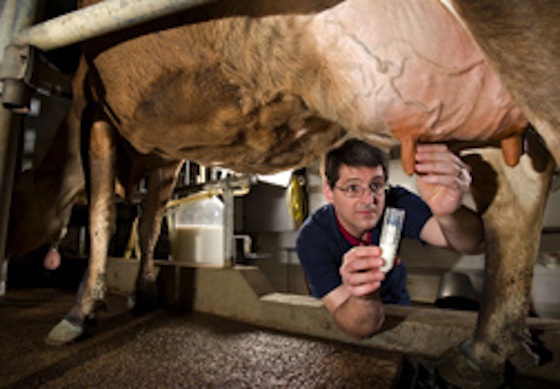 Of all the options being explored by Gay and his colleagues, probiotics might be the most intriguing. Already widely used among people — often after a round of antibiotics — these cocktails of so-called "good bacteria" are being explored for their potential to enhance growth and stave off illness among animals. In studies on piglets, some probiotic combinations have proven more effective than antibiotics in promoting weight gain and preventing the proliferation of certain bacteria (including E. coli and salmonella) inside the intestinal tract. And additional research out of ARS has demonstrated the efficacy of carefully designed probiotic blends in promoting poultry health.

Some probiotic combinations have proven more effective than antibiotics

Already, Gay says, some livestock owners are using commercially available probiotics to curb their reliance on antibiotics — but finding the right combination of these microbes is key to pushing the technique ahead. "A lot of products are already being used, but there's a lot of data missing," he says. "We want to test products to see if they really do work, and we want to develop new ones that are even better."

Strategic combinations of vitamins, minerals, and food extracts might also help. At ARS, research teams are investigating vitamin D as a replacement for antibiotics to prevent and treat mastisis, one of the most common ailments afflicting dairy cows. And in Europe, researchers have seen successful results from a variety of unusual herbal combinations, including wheat grass, nettle, garlic, and oregano. ARS researchers are investigating similar uses for phytochemicals derived from cinnamon, garlic, and green tea, among other natural products. Recently, a team including one ARS scientist patented a compound derived from "onion, shallots, or chives" to "improve disease resistance" among livestock.

ARS researchers also hope that by unraveling the genomes of livestock animals, they can harness the knowledge to selectively breed for robust immunity or design new drugs that are less prone to resistance. Already, one team has cloned a poultry gene responsible for the production of NK lysin, a naturally-occurring antimicrobial protein. A compound derived from NK lysin might one day offer a means of triggering a chicken's own immune system to fend off bacteria.

It could take years for this research to pay major dividends, and in the meantime, some experts wonder why the US can't wean itself off antibiotics in agriculture without a suite of tried-and-tested alternatives. European countries have already restricted "non-therapeutic" antibiotic use and instead promoted animal health with better hygiene and improved living conditions. "We certainly need more tools in the toolbox to reduce antibiotic use," Lyutse says. "But there's a risk that if we keep waiting to solve this problem, we won't move quickly enough."