Officials confirm that Mountain View is taking to the seas, but no one is saying why

Google has held initial discussions with San Franciscoâs Fort Mason Center to dock its mysterious barge on a pier there, The Verge has confirmed. "Theyâre in discussions on the idea of mooring a floating barge off of one of the piers at Fort Mason for a period of time," said Howard Levitt, director of communications and partnerships at Golden Gate National Recreation Area, which manages Fort Mason. "The details, weâre still trying to ascertain ourselves."

"The details, we're still trying to ascertain ourselves."

Google initiated the discussions with Fort Mason Center, which leases the land from the National Park Service. It remains unclear what will be on board the vessel, when it might dock there, or for how long it might stay. The ultimate decision on whether to grant the request would belong to Frank Dean, the superintendent of Golden Gate, who manages the parkâs 80,000 acres. A spokesman there did not immediately respond to a request for comment. Neither did Google.

Last week, CNET broke news of the existence of the barge which is 250 feet long and four stories tall. CNET speculated that Google is building a floating data center in the San Francisco Bay. Later, local CBS affiliate KPIX reported that Google plans to use the barge not as a data center but as a showroom for Google Glass. A follow-up report from CNET said that Google might be planning to float the showrooms from city to city using rivers. A second barge, owned by the same shell company, was later spotted off the coast of Portland, Maine. 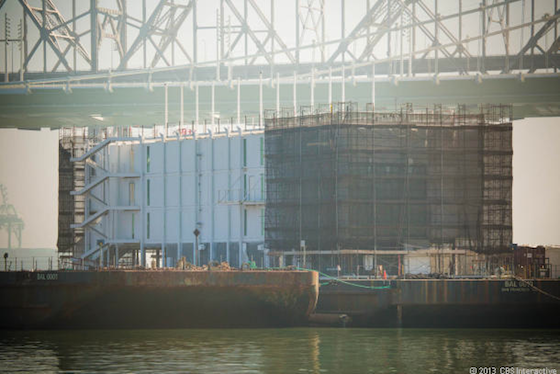 News of the bargeâs existence comes as Google reportedly plans to ramp up production of Glass hardware into the "tens of thousands." This week the company showed off version 2.0 of the hardware, which includes a removable mono earbud and allows support for prescription lenses. Members of the Glass Explorers program, which allowed early adopters to purchase the hardware for $1,500, reported the existence of an online store for Glass accessories.

On Wednesday, the Coast Guard visited the barge, but the agency refused to say what it was doing there, citing "commercial confidentiality." (It did tell the San Jose Mercury News that it was not responding to a medical emergency or a fire.) At least one Coast Guard employee signed a non-disclosure with Google, according to Reuters. Work on both barges appears to have stopped recently as Google works to get necessary permits, according to reports.

Google has been quietly developing a retail experience for Glass

One thing we do know: Google has been quietly developing a retail experience for Glass in San Francisco. In August, The Verge visited the companyâs offices along the Embarcadero, where members of the Glass Explorers program come to pick up their Glass hardware. Inside the sleek, industrial space, which is dominated by concrete and wood tables, Explorers are fitted by a Google associate who walks them through the hardwareâs basic features. As part of the white-glove pickup service, Explorers are encouraged to snap a picture of the San Francisco Bay, which the offices overlook. Itâs easy to imagine Google incorporating elements of the space into a future showroom on the bay.

Fort Mason, which occupies some of the most picturesque real estate in San Francisco, would seemingly be a better fit for a showroom than a data center. The former US Army post lies directly across the bay from Alcatraz Island and has undisturbed views of the Golden Gate Bridge.