Damien Hirst is releasing an ABC book for deranged children

Damien Hirst is releasing an ABC book for deranged children

British artist Damien Hirst, best known for dissecting sheep, pickling sharks, and encrusting skulls with diamonds, is releasing an ABC book. Filled with his life's work, Damien Hirst ABC is a fresh take on the traditional learning aid that utilizes photographs of Hirst's as alphabetic instructions. In the book, "L" is accompanied by an image of the 1994 piece Away from the Flock, which was a lamb placed in a vat of formaldehyde; "D" is for Diamond, 2007's For the Love of God, a diamond-encrusted skull that sold for over $80 million; and "A" is for Anatomy, represented by Hymn, the 20-feet tall anatomical cross-section that launched Hirst's career. 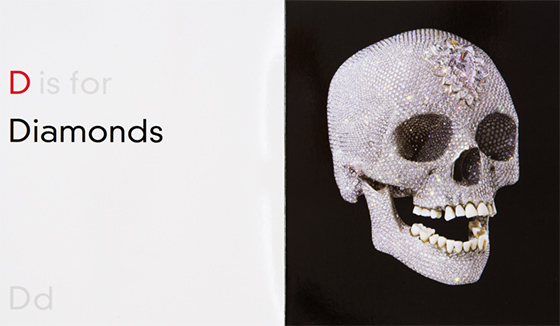 Each entry also plays on the artist's love of typography — the "A" page is printed in the Albertus typeface, "B" is in Baskerville, and so on. Damien Hirst ABC will be released October 15th. You can read a full interview with the artist over at the Guardian.