Some die-hard Albuquerqueans have brought Walter White to life outside of the world of Breaking Bad — just in time to announce his death. A high school science teacher named David Layman worked together with others via an unofficial Facebook Breaking Bad fan club to place an obituary on page A4 of the Albuquerque Journal for the chemistry teacher turned drug kingpin. The end of the brief obit reads "In lieu of flowers, donations can be made to a drug abuse prevention charity of your choice." The show was extensively filmed in Albuquerque, New Mexico over the course of its five-season run, and the producers thanked the local government and its residents for hosting the cast over the years in the final episode's credits. 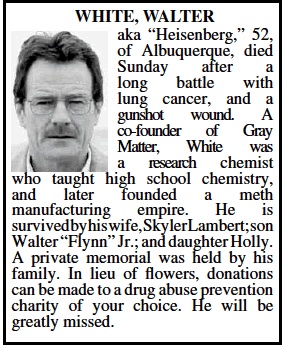