Dropping bombs: Funkmaster Flex and the end of the radio DJ

Dropping bombs: Funkmaster Flex and the end of the radio DJ

Funkmaster Flex has a history. He started carrying records for pioneers like Red Alert and Chuck Chillout 30 years ago in the Bronx, which places him squarely at the birthplace of hip-hop radio DJs. He also has a present: his six-times-weekly radio show on New York’s Hot 97 is the top-rated terrestrial radio show in the world by a long shot. But most importantly, Flex has a future.

It’s no secret that FM audiences have been on the decline for more than a decade, and in a panel at last week’s SF MusicTech Summit, Flex shared his common-sense view of exactly how the radio business is failing listeners.

Your computer is still apparently pretty important, though: In Flex We Trust gets around 10 million page views every day. In a sea of poorly executed online radio strategies, it’s obvious that he puts as much care into crafting his online presence as he does into his radio show: his newsy WordPress site is the place for artists to break songs and news. It was the first media outlet to host an interview with Lil Wayne from his prison stint at Rikers, and it’s become so ingrained in hip-hop culture that it’s made its way back into the songs themselves — Fabolous namechecked the site on his “So NY” record in August. Flex leveraged his tastemaker status to ensure the success of his eponymous iOS app, which launched in April: “We’re at 300,000 downloads now. I normally put mixtapes out on labels, but that was the first time we did it digitally — we got 20 or 30 thousand downloads on the first day.”

The key to Flex’s continued success is his ongoing devotion to giving his fans what they want — something that’s far easier to measure online than it is with notoriously murky Arbitron radio ratings.  “The best part … is when we put Google Analytics on there, we started to see what was reacting, what people liked. I remember we posted Wiz Khalifa and A$AP Rocky before it was even doing well, and that getting hits on the site.  I was starting to learn it was a different world — radio hits and internet hits, I started to see the difference.”

Delivery is a big part of that difference.  Flex’s Hot 97 premiere technique is as much about his personality as a DJ as it is about the song.  I vividly remember hearing him debut Kanye West and Jay-Z’s “Otis” in July of 2011:

As panel moderator Jesse Kirshbaum noted, “If Flex drops a bomb, it turns into a global smash.” He talks almost continuously throughout any major debut, rewinding the opening bars and unleashing atomic sound effects all over the place, even pausing the track to sing its praises in his signature snarl before starting it back up and dropping even more bombs. “Otis” may be an amazing song, but only one radio DJ knows how to make its debut a sound bite to remember — one you might even share with your friends on SoundCloud.

But the songs he debuts online are… well, they’re just links, the stuff of analytics and monetization. As radio necessarily becomes an ever-smaller part of his empire, we’re losing what I think is the very best part of his art: the act of being a curator, of sculpting a string of songs with turntables, a microphone, and bomb-packed samplers. Even though I can’t stand Wiz Khalifa, there’s something about hearing him through the medium of Flex’s show that lends it an air of magic. 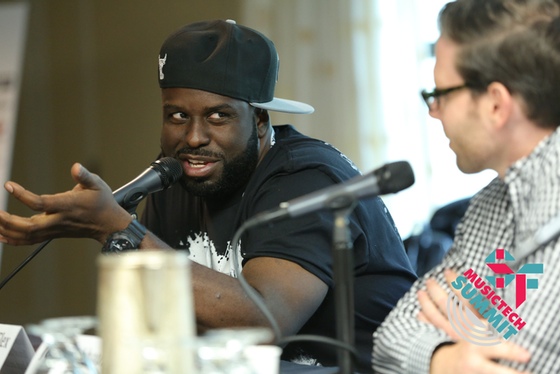 This is how I hold the bomb before I drop it.

Getting excited about music on the radio: an outdated notion

“Do I have to still be on the radio six days a week? Not really. I love it, though … I grew up on that love. I got that passion from Chuck Chillout, Red Alert, and Mr. Magic — I saw how the music excited them, and that excited me.  I don’t think everyone loves it. I think Dick Clark loved it … a kid now who wants to be on the radio … for a lot of people radio is a step into being an entertainer and doing television and other things.”

The loss of creative curatorial personality isn’t something that’s going unnoticed by the new titans of media, though: in a panel called “Streaming Huge Amounts of Music,” representatives from Pandora and Vevo lamented the fact that they didn’t currently have a good framework to inject DJs or VJs into the mix, but hinted that they’re actively exploring ways to include them (or something like them) in the future.

I may be dating myself now, but I really hope they get that figured out quick — in a net flooded with half-assed music and jaded tastemakers, it’s hard for me to get as excited about music as I did back in the good old days of cassette-taping songs off the radio. Funkmaster Flex will continue to break records and drop bombs for the foreseeable future, but he’s not optimistic about the future of the creative commercial radio DJ. “I might be the last of the breed, a little bit.” It’s a prediction that wouldn’t make me so sad if he wasn’t the most qualified person in the world to make it.

Audio courtesy of Media One A/V.