Xbox Fitness: how Microsoft plans to use big names and big data to whip you into shape

Share All sharing options for: Xbox Fitness: how Microsoft plans to use big names and big data to whip you into shape

Fitness has been a part of the Kinect experience since the sensor was first released, but Microsoft's upcoming Xbox One reinvents the experience from the ground up. In the past, users were stuck in a fitness video game featuring digital avatar hosts and odd virtual worlds. But Microsoft's new and highly detailed Kinect sensor enables an entirely new type of interactivity on the Xbox One, making use of muscle mapping, balance calculations, and limb orientation detection. Fitness on the Xbox One isn't just about awkward video game workouts with big motions like squats and lunges — Microsoft is trying to open up the platform to established exercise programs and create an experience based on perfect balance, form, and intensity.

The Xbox One is launching with a few big-name programs, such as Tony Horton's P90X and Shaun T's Insanity, along with workouts from well-known trainers like Tracy Anderson and Jillian Michaels. Titles can be purchased individually, for about the same cost as buying the DVD, or are available free for Xbox Live Gold members through December 2014 (subscription pricing after that date still hasn't been finalized). 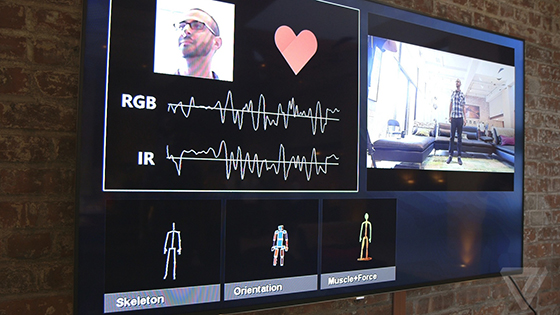 The new technology is a big win for Xbox, expanding its appeal to include the loyal followers of established fitness trainers. Instead of creating new workout routines to fit within the confines of limited technology, the Xbox One is able to tailor itself around workouts that are designed first for the human body. Tackling P90X on Xbox Fitness is the same as purchasing the DVDs, but with digital benefits like instant feedback, automated progress tracking, and an optional link to Xbox Live friends. Likewise, trainers don't need to develop new material in order to join the platform. They'll able to work with Microsoft to fine-tune the sensors and feedback to suit their established routines.

For example, celebrity trainer Tracy Anderson worked with Microsoft to ensure that the Xbox One was able to understand and track her exercise program, the Tracy Anderson Method. "I'm able to tell Microsoft exactly what I want people to be hitting and at what intensity," she said. "It's no longer just about large movements, like squats and pushups. I'm now able to deal with rotations that cause the smaller muscles to wake up, too."

Microsoft invited us to a large rented loft in New York City's Flatiron District to show off the power of the new Kinect and how it facilitates the Xbox Fitness program. A personal trainer performed a four-minute demo workout, cycling through a few different routines from trainers already on the platform. Ours was the last demo of the day, and the personal trainer had already performed six workouts. As she went through the intensive demo routine one last time, she leaned a bit too hard on a lunge. I had barely noticed the difference, but there was immediate feedback on screen showing how to correct the mistake. Her next lunge had perfect form, and her workout energy meter went up. 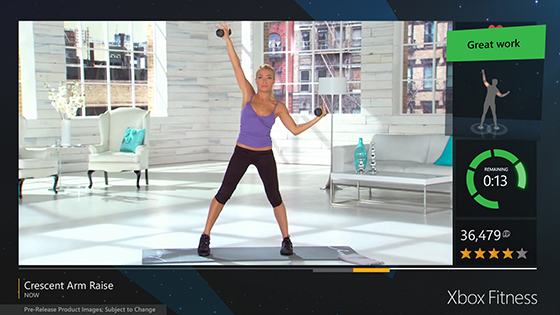 The real precision comes from the Kinect's muscle-mapping capability, which gives it the ability to monitor body orientation and balance. This helps create a highly detailed representation of the user, which is almost like looking into a mirror. These new avatars are a main reason that Anderson teamed up with Microsoft. "Poor coordination is a major hurdle for many people who want to get into shape. Our brains are not programmed to follow cartoony avatars well."

In fact, Anderson thinks working out with Xbox Fitness may be even better than taking a class at your local gym or hiring a personal trainer. It can cost less than regular trainer sessions and provides access to well known celebrity trainers who might otherwise be out of reach. Plus, the Xbox One can monitor and give immediate feedback in a way that would be difficult for a human observer.

it's all too easy to fall off the exercise wagon

People are constantly searching for the one fitness product or service that will finally stick. Starting a new workout routine is inspiring at first, but it's all too easy to fall off the exercise wagon. Likewise, using a video game console for your daily workout seems like a great idea — but the experience on the old Xbox felt too much like a workout simulation rather than something real. That old feeling of inspiration came back while watching the demo of Xbox Fitness, like I had found a exercise system that would finally have staying power. Regardless of whether that feeling stays, it's exciting to see console fitness technology that's able to adapt to established workout routines rather than the other way around.