But will it be enough to win back Gmail users?

Yahoo’s march to modernize its core products continues with a significant redesign of Yahoo Mail that brings Flickr-generated themes, a new compose screen, and a host of other features designed to win back defectors. The company is also putting a cap on its previously unlimited storage: 1 terabyte, which the company says should be good for 6,000 years of email. The redesign is rolling out today simultaneously on the web, and for apps on Android, iOS, and Windows 8.

Mail is a pillar of Yahoo’s products, with more than 100 million daily users. And yet like many of Yahoo’s products, it was overtaken in recent years by Google’s equivalent offering — Gmail now has more than 425 million monthly users. It became the biggest email service in the world by offering tons of free storage, smartly threaded conversations, and a service that often felt faster than its peers.

One terabyte of free storage

With today’s update, which comes on Yahoo Mail’s 16th birthday, Yahoo aims to leapfrog Gmail on each of those counts — even as it transforms to look more like Gmail than ever. Yahoo has put significant focus on mail this year, introducing new tablet apps and releasing unused email addresses back into the wild. (That last move led to criticism over security concerns.) The goal is to get Mail growing again. If Yahoo owns your inbox, it can steer you to many other Yahoo products. But will a younger generation of users give it a chance? 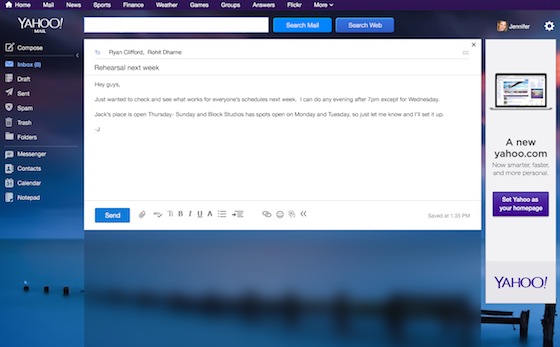 In August, Yahoo put former Xobni CEO Jeff Bonforte in charge of its communications products, which also include Messenger, Groups, Contacts, and Calendar. Xobni, which Yahoo acquired in July, built plugins designed to make the inbox more useful; the new Yahoo Mail shares that objective. "Our average user already has thousands of messages," Bonforte said in an interview with The Verge. "This is the beginning of helping them see the inbox can be more, not less. It’s part file system, part digital memory, part note-taking environment, part collaboration suite. It’s all those things, but how can we create a more collaborative environment?"

"How can we create a more collaborative environment?"

The answer was to introduce a number of smaller changes that added up to a real step forward. The first thing most users will notice about the app is the new look, which takes cues from this year’s popular Yahoo Weather app. Yahoo Mail includes more than two dozen themes with images taken from Flickr — and uses algorithms to pick colors out from those images, changing the hues of buttons and text labels throughout the experience. The imagery has been upgraded for high-resolution screens, and uses more lightweight fonts throughout the inbox. And the themes sync across clients, so when you open Yahoo Mail on your tablet it will have the same basic look as the web version.

More interesting are the changes that Yahoo has made around sending and organizing mail: threaded conversations can now be expanded inside the inbox, letting you quickly navigate to a recent message from the conversation. Clicking a magnifying glass next to a sender’s name will take you to every message you have received from that person. And a new compose screen on the web brings up a rectangular white card that hovers over the inbox, similar to the dead-simple interface for composing a new post on Yahoo-owned Tumblr. Bonforte calls it "the best compose screen on the market," and time may prove him right.

Yahoo is also now giving away for free premium features that were once part of Mail Plus, which cost $19.99 a year. Free users can now create disposable addresses to hand out to marketers, automatically forward Yahoo Mail to another account, and get offline access to their messages with POP. The only thing they don’t get from Mail Plus is an inbox free of advertisements; to go ad-free, you can pay Yahoo $50 a year. (Existing Mail Plus users can keep their current plans, though it’s not clear why they would want to.)

Switching email accounts can be painful, and it’s not clear that any single feature that Yahoo is releasing today would prompt a user of another service to abandon ship. At the same time, the update arrives as many are still grumbling about Gmail’s recently redesigned compose window. And the 100 million people who use Yahoo Mail daily are likely to find something they like in the new features, even though just about all of them can be turned off if they fail to impress.

The shift to mobile devices has led software designers to rethink the way we search, send, and organize our messages. Yahoo’s latest take on email freshens up the web version while making it feel of a piece with the phone and tablet versions of Mail that the company released earlier this year. And while it may not recapture Gmail users by the millions, it could reignite a healthy competition between Google and Yahoo to see who can better tame our inboxes.