Twitter is releasing an updated version of Windows Phone client today, complete with lock-screen integration and a new dark theme. Similar to the Facebook Windows Phone app, Twitter is surfacing content straight to the Windows Phone lock screen. Tweets are displayed on the lock screen, seemingly randomly, with the content, username, date, and user picture. There's no way to interact with them, and they simply act as a wallpaper for the lock screen. 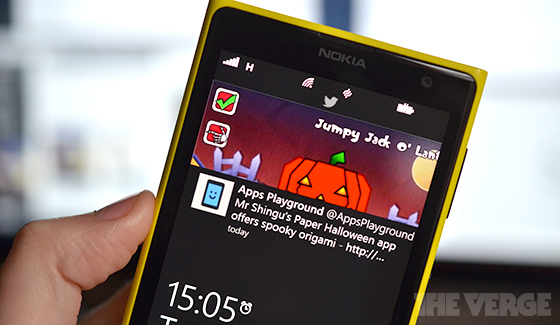 Alongside the new lock screen changes, Twitter has also reintroduced a dark UI for its app. You can now pick between a white and black backdrop to read tweets. Other improvements include the ability to pin keyword searches to the home screen, an option to select favorite Twitter accounts and receive notifications when they tweet, and the ability to sync DM read status to Twitter.com and the Windows 8 app. Twitter has also improved the search function it its Windows Phone app. It's now greatly simplified and offers suggestions based on previous search history, or a quick link to user profiles. The app is available now in the Windows Phone Store.