Bike+ tracker is like Find My iPhone for your two-wheeler

Companies large and small have partnered with Verizon to bring connected products to life through the company's Innovation Centers, and today one of its smallest partner companies showed off how it is using Verizon's network to keep your bike from being stolen. Wi-MM (which stands for "wireless machine-to-machine") is a three-person company from Santa Clara, CA, but they've been able to leverage Verizon's network to build Bike+ — a GPS- and cellular-enabled bike tracker that continually streams data on its location to the cloud. A good way to think of it is like "Find my iPhone" for your cycle.

Once you install the Bike+ BPU-100 hardware installed on your bike (the unit they showed off was a plastic plate attached with anti-taper screws), you can keep tabs on its location with a corresponding Android or iOS app. Once you've "armed" the Bike+ sensor using the corresponding Android or iOS app, you'll get a text alert any time the bike is moved out of the area you've prescribed. Your bike's location is constantly pushed to the cloud through Verizon's network, and you can check on it any time from the app or a computer. To make sure they don't get spurious alarms, users can adjust its sensitivity based on where you're locking up your bike — so you won't get an alert every time it gets jostled if chained to a bike rack, for example. And beyond the text alert, there's a built-in buzzer that goes off to help deter thieves, as well. 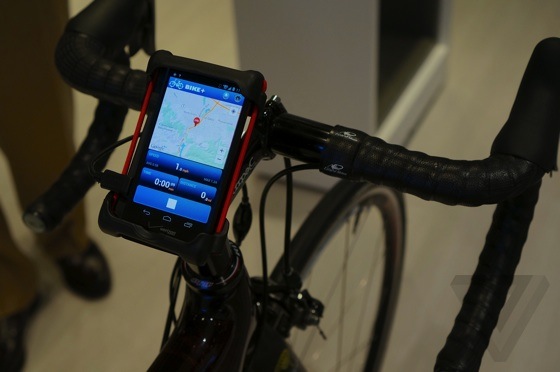 In addition to its theft-deterrence tools, Bike+ is also a fully featured ride tracker — you can keep tabs on your distance, MPH, routes, and more. You can hook up your phone to the BPU-100 using Bluetooth, or simply let the hardware push your ride details to the cloud and check them out later. There's also a web view with more analytics for those that really like to keep track of their performance. As for power, the Wi-MM team told us that it the BPU-100 should last for "months" between charges if you just use it for security. If you're using it more frequently to keep track of your rides, you'll probably need to power it up (using a micro USB cable) after a handful of rides.

All in all, the Bike+ system sounds like a pretty capable choice if you're looking to keep better tabs on your bike and also want to keep better track of your rides. The company says it'll be available to customers by the end of the year for "less than $200," and it's also exploring partnerships to get Bike+ in bike-sharing systems and to find retail partners. The company also says that, thanks to its partnership with Verizon, it'll be available in the carrier's 1,700 retail stores as well.