T-Mobile's coverage hasn't been one of its stronger points, but the carrier is looking to tackle that issue in an interesting way: it's giving subscribers free international data coverage that spans across over 100 countries. We're expecting T-Mobile to go into more detail on the service later tonight at an event in New York City, but it's already updated its website to tease the new plans. One diagram appears to show the international coverage extending through North and South America, across much of Europe, and in scattered locations throughout Asia as well. 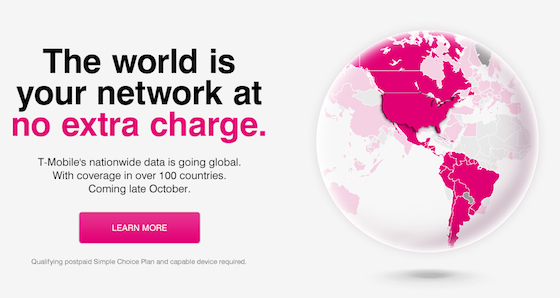 The additional coverage will begin later this month, and will require one of T-Mobile's postpaid "Simple Choice" plans. For travelers, the change could be a big selling point, as international data usually requires paying additional fees or hopping over to a local carrier everywhere you go. It'll be an incentive for those who don't leave home much too, but it certainly won't be as compelling as wide and consistent LTE coverage would be.

Update: T-Mobile has announced further details of the global roaming plan, which will work in over 100 countries.