Android 4.4 KitKat and Google's quest to take over the world

Android 4.4 KitKat and Google's quest to take over the world

Can a low-end Android phone be any good? For Mountain View, a billion users are at stake

"As we get on our journey to reach the next billion people, we want to do it on the latest version of Android." — Sundar Pichai

At its root, Google’s Android platform has always been about growing the audience for the company’s services and thus expanding its core business of selling advertising space. Even if the Nexus 5 is a flagship, what matters more to Google in the long run is the size of the fleet behind it. You can see that motivation driving the development of Chrome OS and the Chrome browser itself, though nothing exemplifies it quite so well as the newly released Android 4.4 KitKat.

Android “for everyone” means including cheaper and lower-spec devices

Beneath the mild cosmetic changes, version 4.4 of the Android OS is about optimization. Using fewer resources to perform the same tasks makes Android more agile and should, at least in theory, lead to a lower minimum spec for devices. Lower specs mean lower costs for hardware manufacturers, which in the ruthlessly competitive smartphone market does actually translate to cheaper prices for consumers. So Google is democraticizing smartphone access, a fine feather for its public-facing cap, while pursuing its own business interests.

The focus on improving entry-level performance with KitKat is, in the eyes of industry observer Avi Greengart, “one of the smartest things Google has done for Android in a long time.” Greengart notes that although Android enjoys the lion’s share of smartphone sales in developing markets like China, those are most commonly Android 2.3 devices with sluggish responsiveness and no access to Google Play services. His perspective is supported by Strategy Analytics data that shows the Asia Pacific region is the fastest growing market for smartphone shipments and Android is the primary shipping OS — but “older versions and piecemeal UI tweaks have led to a compromised user experience.” 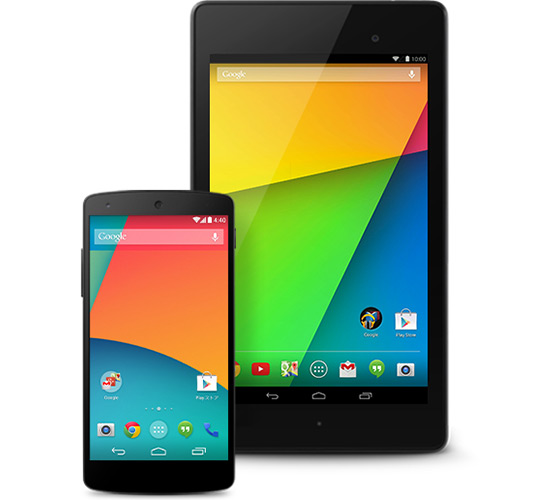 Over the longer term, Greengart sees another major benefit to Google transitioning everyone — even the makers of unbranded $49 knockoffs — to a common OS version. It helps Google compete with Apple, because “if Android is to compete effectively with Apple on quality apps, it needs a more modern, homogenous target for developers across price segments and geographies.” In his view, that could aid tablet development too, as devs can let go of trying to support legacy versions of the software and start exploiting the Android 4.x APIs and tools designed to help them make apps that adapt to various screen sizes.

When Google introduced Ice Cream Sandwich — unifying its Android versions for phone and tablet into one — it presented it as the one Android OS for all screen sizes. Now it has what it believes is the one Android version for all budgets as well. It may turn out that the improvements in 4.4 are what unlock the third-party engagement to bring about the promised benefits of 4.0.

“It is entirely sensible for Google to address this competitive threat immediately.”

Beyond purveyors of its own open source software, Google’s new focus on the entry level is also a reaction to competing projects like Firefox OS and Microsoft’s effort to push Windows Phone down to lower price points. Neither of them can be said to have made a big dent yet, though Scott Bicheno of Strategy Analytics tells The Verge that “it is entirely sensible for Google to address this competitive threat immediately.” Devices like Nokia’s Lumia 520 ably illustrate the potential for disruption to Google’s hegemony — it pairs a modern and swift user interface with pricing previously reserved for Breaking Bad burners instead of real smartphones.

Google’s not particularly concerned about who makes the phone that keeps users off affordable Lumias and on Android, it just cares to have those newcomers on its platform and using its services. As Michael Facemire of Forrester Research puts it, Google “would be happy to give the devices away for free all over the world if it guaranteed that every person using them drove traffic through the Google servers.”

Like a USB key, the device you use to plug in to your chosen ecosystem is now less important than your choice of software and services. In the quest to offer a cohesive and comprehensive proposition to the end user, all the big companies have been working to make their various offerings compatible and interchangeable. For Apple, Mac OS and iPhone OS have become OS X and iOS and continue moving closer together, particularly with the recent switch to 64-bit mobile processors; Microsoft’s Windows and Windows Phone now share the same kernel; and Google has Android 4.4 to unify all mobile devices under its jurisdiction. 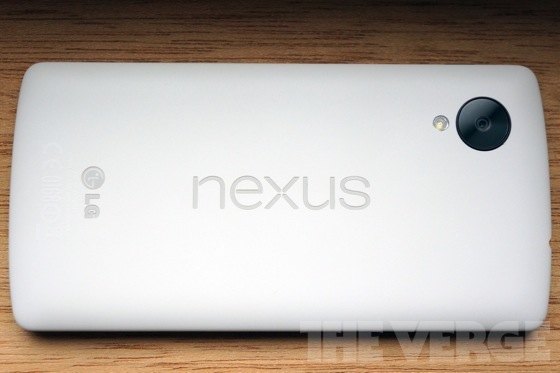 Still, the reason Google takes the time to design Nexus devices is the same reason Microsoft has its own Surface tablet line — neither company is quite satisfied with the quality and pricing offered by its hardware partners and both want to accelerate the rate of change. The $349 Nexus 5 achieves that with a flourish. It undercuts Apple’s most affordable new iPhone, the 5C, by a clear $200 when bought unlocked, while lacking none of the modern necessities (the way its predecessor, the Nexus 4, did with its fatal lack of LTE). In European stores, you’ll find the Nexus 5 sitting in the same price bracket as the BlackBerry Q5 and the Samsung Galaxy Ace 3 — essentially neutering the midrange competition in one swift move.

Boot up your freshly minted Nexus 5 and what do you see? A phone dialer that’s plugged directly into Google’s search, the ever-present Chrome browser, and the one-stop-shop for communications that is the Hangouts app. Hangouts is now your default SMS app, to go along with being the replacement for Google Talk and the company’s go-to video chat application. If you want to avoid the Google ecosystem, you’re best off avoiding Android 4.4 altogether.

how many older phones will get the benefit of this svelter Android?

Questions still remain about Google’s latest mobile OS. Will its improvements be as telling in day-to-day use as the company claims? And after the admission that the two-year-old Galaxy Nexus won’t be updated, how many older phones will get the benefit of this svelter Android?

What shouldn’t be up for debate, however, is the need for Google to reassert its dominance in the lower end of the smartphone market. As Sundar Pichai and Eric Schmidt have repeatedly said, Google wants to connect the next billion mobile users — and specifically connect them to its own ecosystem. It has been through proactive measures like the ones contained in Android KitKat that Google has expanded beyond its bread and butter of web-based textual searches to become the cephalopodic services company we know today. It’s hard to imagine using any piece of modern technology without coming into contact with some Google service or another — with Android 4.4, Google wants to make that impossible.

More from this stream Google's next generation: Nexus 5, Android 4.4 KitKat, and more