Vevo rolls out 'most significant update' ever with major redesign

Share All sharing options for: Vevo rolls out 'most significant update' ever with major redesign

Vevo has just made what it's calling the "most significant update" to the music video site since its launch. The front page of Vevo is now a Facebook-style news feed, with stories that replace the large cover images that used to dominate the Vevo homepage. Artist pages have also seen a big redesign. Previously displayed in pop-up windows crowded with bios, tour dates, and video links, the redesigned artist hubs now focus primarily on videos, offering a giant grid of all the available songs, while other information is sectioned off into tabs. 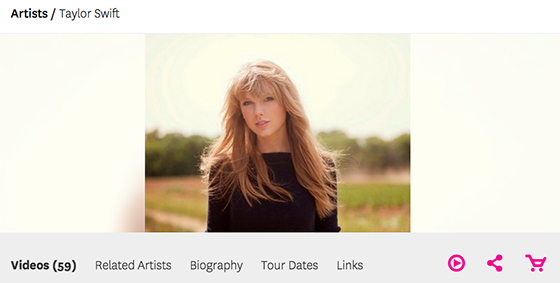 On one hand, the changes vastly improve the look of the site, but stepping away from the windowed design has its drawbacks. While previously you could search and read up on artists without interrupting the song you're playing, viewing another artist's page now cuts short the song. For people used to the old Vevo, the changes might appear like form over function

The negative impact from the artist hub redesign is somewhat mitigated by an improved browsing experience. Video thumbnails are smaller, cleaner, and more densely packed before, allowing you to quickly scan for the video you want. The now-playing screen, however, currently doesn't contain links to related artist pages, instead opting for an overlaid sidebar that shows you what videos are coming up next.

A major change that'll benefit tablet and mobile users that don't use the Vevo app is the shift to a responsive design, which brings the functionality of the desktop site to both platforms. It's a vast improvement over the currently unoptimized mobile site, but Vevo does have dedicated free apps for almost every platform imaginable, so the benefits are somewhat limited.

The final change that users will notice is an expansion of Vevo TV. Launched earlier this year, Vevo TV is an MTV-like 24 / 7 stream that broadcasts music videos all day long. Moving forward, Vevo will split Vevo TV in a trio of channels: pop, country, and R&B / rap.

Update: Since publishing this article, Vevo has moved the redesign from beta to final. We've updated the article to reflect that change.