Share All sharing options for: Google's mystery barge could be a VIP party boat and Glass store combined

After intense speculation, the secret contents of Google's San Francisco barge have apparently been revealed. Local CBS station KPIX 5 reports that multiple sources have confirmed the majority of the barge's space will be taken up by luxury showrooms for the company's upcoming Google Glass headset, while the top floor of the barge will be a "party deck."

As we reported earlier this week, Google has been quietly developing a luxury retail experience for Glass in San Francisco. Currently located in the company's Embarcadero offices, the retail experience sees Glass Explorers (the company's name for early adopters) fitted with their new headset, walked through the hardware, and encouraged to explore software features. We speculated then that the same experience could be coming to Google's barge, and if KPIX 5's sources are accurate, then that speculation looks to be spot on. 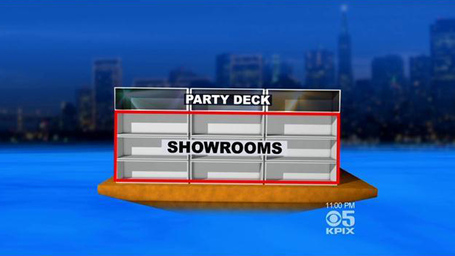 A mockup of the Google barge, created for and published by KPIX 5.

The project has reportedly been in planning for over a year now under the oversight of Google co-founder and Google X leader Sergey Brin. The plan is to "upstage" Apple's retail stores with the "dazzling" and unusual showrooms. It's said that access to Brin's party deck will be on an invitation-only basis, kitted out with bars, lanais, and other opulent comforts. According to KPIX-5, the project has been delayed because the US Coast Guard is conducting routine inspections after labeling the store a "floating vessel."

An example of a store in a shipping container from London's Boxpark.

Constructed of standard 40-foot shipping containers, the Glass store can be disassembled and assembled at rapid speed, meaning the contents of the barge can be offloaded to other sites with ease. That's not a new concept by any means: a notable example of shipping containers being transformed in a luxury semi-permanent structure can be found in London, where Boxpark plays host to a number of pop-up boutique outlets for the likes of Nike, Xbox, and Samsung.