Even by 2013 standards, Lockheed's SR-71 Blackbird is considered one of the most technically incredible aircraft ever made: flying nearly three times higher than an airliner, its pilots were made to wear spacesuits. It could quite literally outrun a bullet in straight flight. It evaded radar decades before the F-117 and B-2. And perhaps most incredibly of all, its skin was made entirely of titanium — which came mostly from the Soviet Union — at the height of the Cold War.

Now, it's getting a successor. Aviation Week reports that Lockheed's famous Skunk Works facility, where some of the most secret aircraft ever built have been conceived, is working on an SR-72 that could be capable of Mach 6 cruise flight. That's twice as fast as the SR-71, which still holds a variety of aircraft speed records to this day, even though it hasn't flown in nearly 15 years. The 72 is expected to employ a conventional turbine engine in combination with a scramjet. 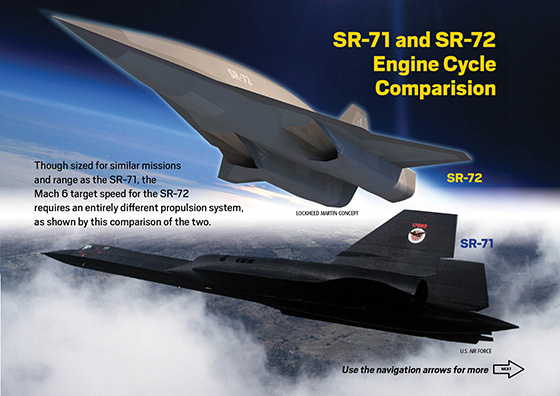 The Blackbird — a true spy plane, designed to take pictures in hostile environments — met its demise by virtue of the end of the Cold War and the rise of high-resolution spy satellites, but the SR-72's role is said to be a little different: it will have the capability to strike targets by launching missiles.

This isn't a near-term project, though. The first tests won't likely begin until 2018, and Lockheed expects that the SR-72 could be fully operational in the Air Force's fleet (if approved) by around 2030.