Olympus unveiled the Stylus 1 camera this week, a fairly compact superzoom with a sensor that sits on the larger side of the point-and-shoot spectrum. Buying a superzoom almost always means making concessions on body size, image quality, or versatility in one way or another, and manufacturers have hardly agreed upon what a proper one looks like. Some offer massive zoom ranges, while others go light on the "super" aspect in favor of better image quality. The Stylus 1 seems to land right in the middle of it all. It’s $699.99, looks incredibly stylish, and is a bright option in a crowded field — that is, if you know what you’re looking for. 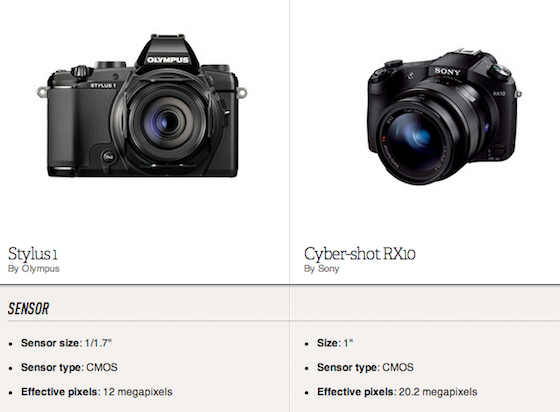 The Stylus 1 is almost Olympus’ answer to Sony’s RX10. The RX10 is a seriously high-end point-and-shoot that includes a large 1" sensor, a zoom range out to 200mm, and a price tag of $1,299.99. The Stylus 1 is more or less what happens when you take that down a notch: its sensor is smaller — at 1/1.7" — but its zoom goes out to 300mm, and it’s significantly less expensive. Both cameras even have Wi-Fi, some manual controls, and the same f/2.8 maximum aperture throughout their zoom ranges.

If you’re looking for a high quality point-and-shoot with a focus on zooming capabilities, the Stylus 1 stands out distinctly from the RX10: it's effectively the next-best-thing at a much lower price. With its zoom extending an extra 100mm as well, that could be enough to tip the bar in its favor for many enthusiasts.

But the Stylus 1’s story gets a bit messier once you start looking at the myriad other not-quite-identical camera options around it. There are cameras with smaller zooms and bigger sensors, like Canon’s PowerShot G1 X, and there are cameras with massive zoom ranges and smaller sensors, like Nikon’s Coolpix P520. In fact, you can probably name a zoom range and find a compact camera to fit it — though you’ll usually have to put up with increasingly smaller sensors with the more "super" the zoom gets.

Even though they all fall in or around the same class of camera, it’s hard to directly compare point-and-shoots that vary so wildly in their zoom ranges. A number of options are listed in the image above, and they largely fall into two categories: cameras that try to compete through price, and cameras that try to compete through features. While the Stylus 1 certainly isn’t the least expensive of the bunch, if you can make do with its comparably limited zoom range, it should produce much better images than the pack while including plenty of controls for advanced shooters.

The Stylus 1 offers plenty of zoom, but not quite like the competition

Choosing a superzoom in the first place means you’re probably looking for something fairly specific, giving up on cameras at the same price that could likely do one or more of the same things far better. But if that’s what you’re interested in — an all-purpose camera that’ll fit inside your coat pocket — Olympus will be offering one of the more appealing options out there when the Stylus 1 launches in December. It's all up to how much zoom you need.

There were a handful of other interesting products added to the database this week:

If you want to learn more about any of the products mentioned above, all of our information on them can be found through the database box located beneath the article. For more on cameras, wearables, and just about every product around, you can check out the full Verge Database right here.