Meet the first company cashing in on its Google Glass app

Meet the first company cashing in on its Google Glass app

The Fancy lets users shop what they see

The exciting promise of Google Glass was that it would be a wearable technology allowing users to merge the physical and digital worlds, to craft a layer of information on top of what the user was seeing around them. So far, however, most of the apps on the platform have simply transplanted the functionality of their smartphone software to a screen much closer to your face. The New York Times and Twitter, for example, push updates users can scan hands-free. But there is one company playing with the possibilities Glass provides for augmented reality — and making some money to boot.

The Fancy is a New York ecommerce startup known for its ties to the world of high fashion and luxury goods. Its Glass app allows users to snap a picture of objects they see in the real world, then finds them matching or complementary items with similar styles and color they can purchase. It’s a clever use of the technology that has made The Fancy the first company to actually make money on Google Glass.

Because of the intimate nature of Glass, Google has been careful about allowing commerce onto the platform. The terms of service for the API it opened up to developers specifically prohibit them from charging for apps or showing commercials. But it didn’t say anything about in-app purchases, a strange loophole that was perhaps deemed less invasive than advertising. People using the Fancy app on Glass have purchased everything from clothes to jewelry, kids toys to kitchenware.

"The spontaneity of being able to discover and buy things you'll love based on what's right in front of your eyes is pretty compelling," says Fancy founder and CEO Joe Einhorn. "We see a mix of people using the app: from the high-tech interior designer looking to decorate a space to the stylist that wants to match accessories with a fashionista's outfit." In other words, while the Glass app isn’t a big money-maker for the company, it adds to the startup’s stylish aura and helps its stand out among a certain set of tastemakers. 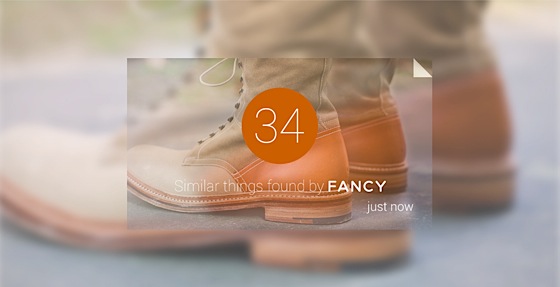 So far Google Glass has been limited to a group of select explorers and, at $1,500, is a bit pricey for the average consumer. But it’s a good match for shoppers on The Fancy, which counts Francois Henri-Pinault among its investors and board members. Pinault is the chairman of PPR, the luxury goods giant which owns Gucci, Bottega Veneta, Yves Saint Laurent and Balenciaga. The front page of The Fancy regularly features high-end fashion items that retail for thousands of dollars. And while Google Glass has been mocked as the item most likely to mark users as nerdy rich "Glasshole," the company has made an effort to bring its product into the fashion world.

Apps that enhance, not compete with, the real world

Google announced recently that it will be ramping up production of Glass units, tripling the number of Explorer models available to the public, and making accessories like earbuds and perhaps prescription lenses. So far the Glass team seems pleased with how The Fancy is leveraging class. "One of the philosophies we like to remember when thinking of cool new Glassware is ‘the world is the experience,’" says Timothy Jordan, a developer advocate with the Glass team. "That is to say, developers building for Glass shouldn't create experiences that compete with the world." Rather, believes Jordan, they should be upgrading a users ability to find value in the world around them. For The Fancy, that philosophy means literally helping to put a price tag on items that catch a user's eye.