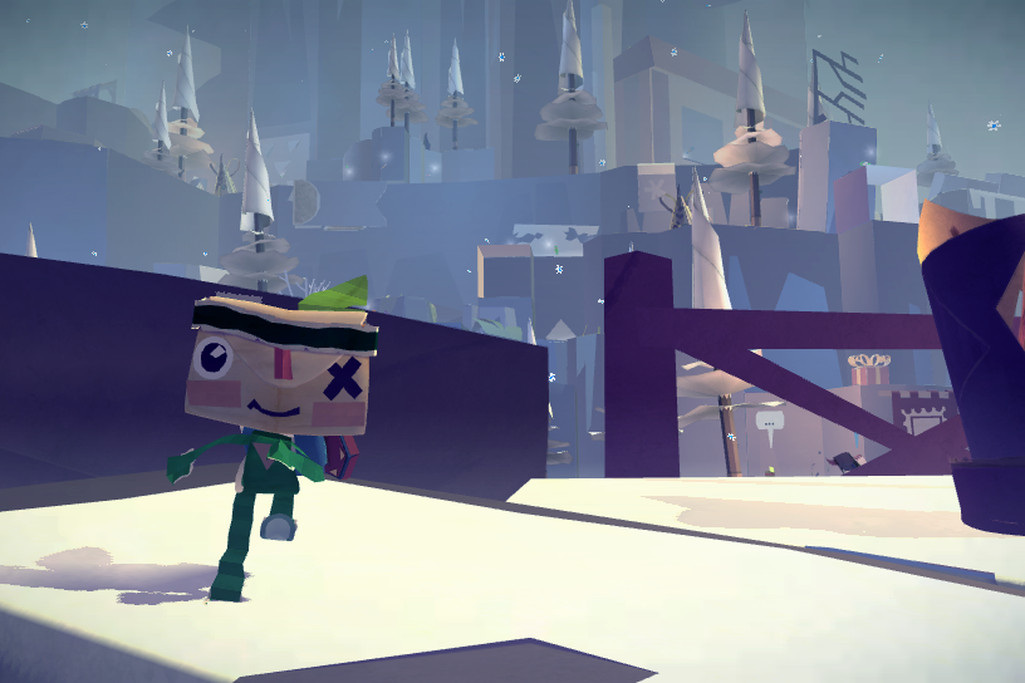 Tearaway is a world made entirely from paper — whether it's the splashing puddles, or the wafting lines from a particularly stinky piece of cheese. A soon-to-be-released game for the PS Vita, Tearaway is the latest creation from Media Molecule, the team behind PS3 hit LittleBigPlanet. And it not only has an absolutely charming papercraft art style, but does something few other Vita titles manage: it makes use of the device's unique features in inspired and delightful ways. Whether it's using the camera to literally put you into the game, or letting you stick your fingers into the virtual world using the rear touch panel, Tearaway is not just a great game, it's one that could only work on Sony's handheld. And it manages to do so in a way that feels enaging instead of gimmicky. "As a company, we have a real desire to make very playful experiences," says creative lead Rex Crowle. 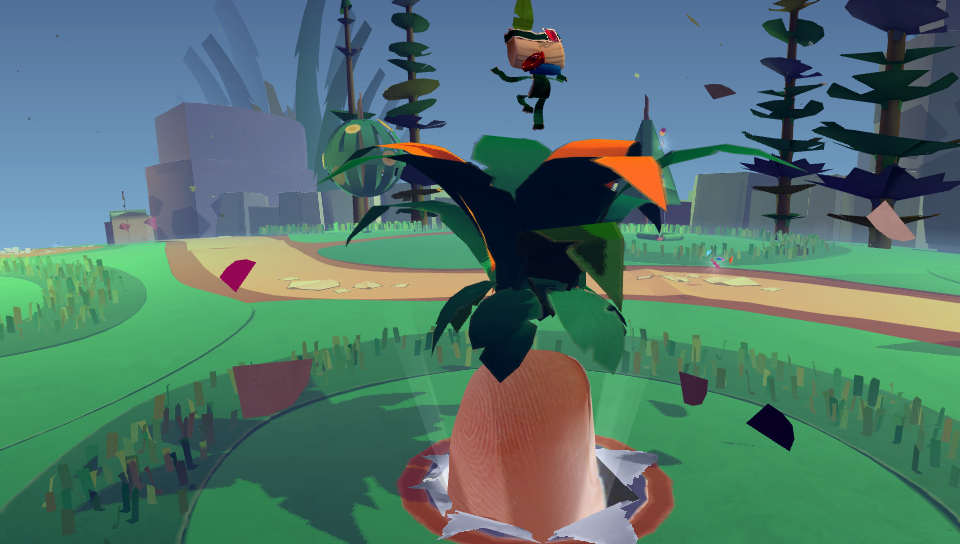 At its core Tearaway is a somewhat basic 3D platforming game. You control a tiny messenger as he (or she) attempts to reach the sun to deliver a message. You'll be hopping over obstacles, solving simple puzzles, and jumping on top of little bad guys called scraps. It's all very familiar, but the more traditional platforming elements are augmented by some clever uses of the Vita hardware. For one thing, that sun the messenger is striving towards is actually you: the front-facing camera puts your smiling face into the game and superimposes it on top of the sun. In a fourth-wall-breaking story twist, you actually take on the role of a godlike creature who can interact with the messenger's world to help them along.

"We have a real desire to make very playful experiences."

The best example of that comes in the form of the rear touch pad. At certain points in the game, touching the back of the Vita will cause virtual fingers to appear on screen, as if you were literally putting your hands into Tearaway's world. This lets you squash enemies or move obstacles out of the way, and in some instances you can play virtual drums to bounce the messenger to a different area of the level. The front touchscreen is also used at times so that you can push and pull the environment, moving it around as if it was a pop-up book. This adds a new twist to the platforming action, as you have to worry about both moving a character through the world and manipulating that world at the same time.

"From the get-go, we really wanted to utilize it in new ways," Crowle says of the Vita. "The initial desire was to use all of [the Vita’s features] to do whatever we could with the hardware." And it's hard to think of a Vita function that isn't put to use, whether it’s snapping pics with the camera to import textures into the world, or sharing virtual papercraft creations with the handheld's online functionality. At the same time, you have a solid platforming experience that controls well thanks to the handheld's physical buttons and sticks (LBP fans will be glad to know that jumping feels particularly great this time around). 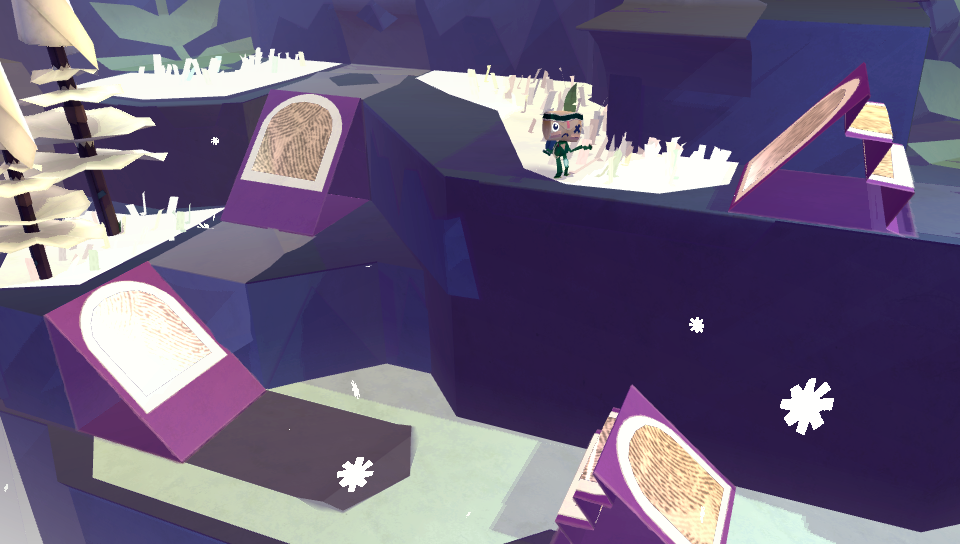 Using the Vita to its full potential was always a goal, but over the course of development that idea was occasionally lost. At one point the team at Media Molecule realized that their prototype was something they could play on a PC, with no real defining features that made it well suited to the Vita. "That was a bit of a wakeup call," says Crowle. 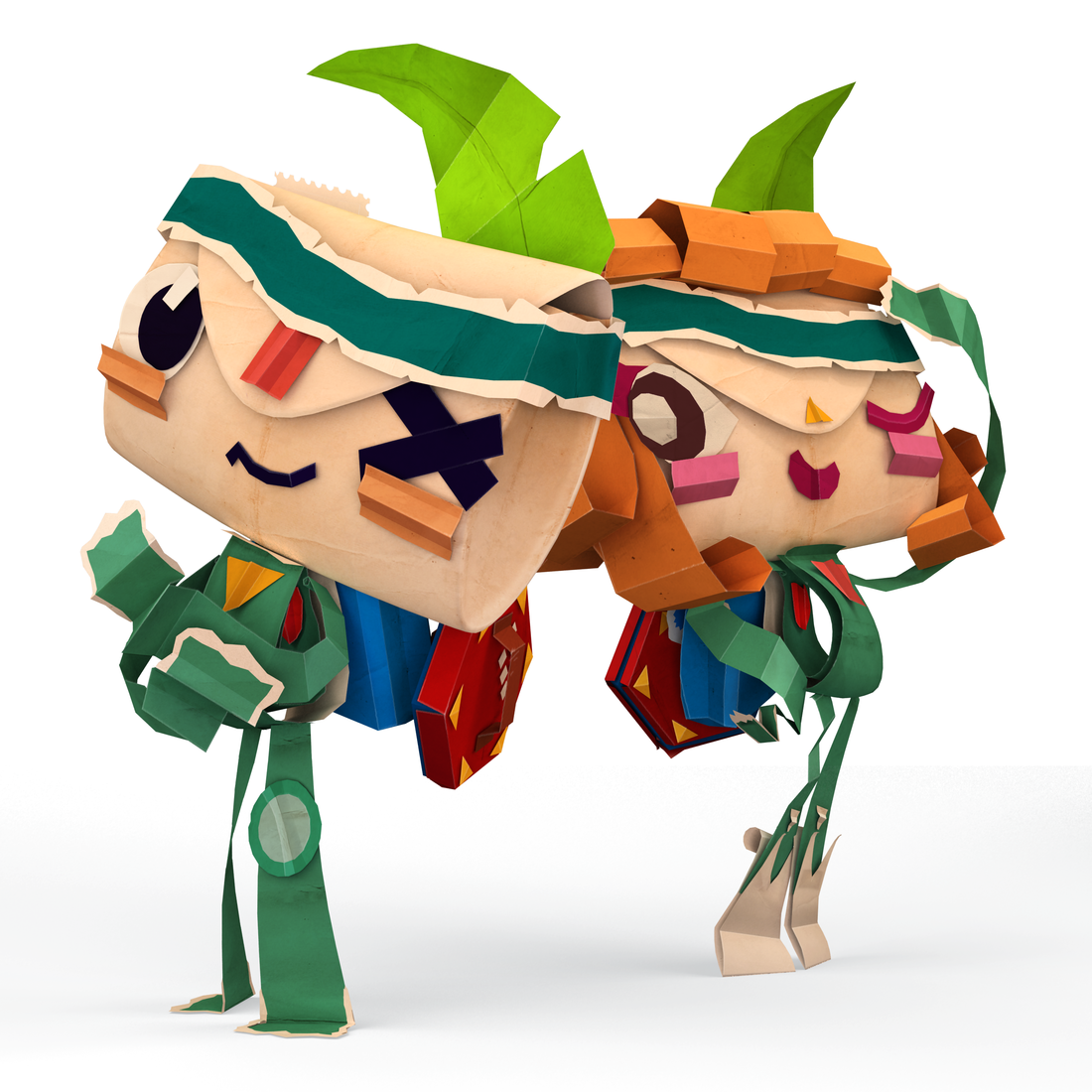 "There's something a little bit magical about these mundane sheets of material."

The answer, it turned out, was the paper itself. Tearaway's delightful papercraft theme is not only an aesthetic consideration, but it helped inform the design as well. The team made real-world papercraft objects and levels, and used them as a prototyping tool. "When we started actually making things out of paper, and exploring its physical properties, we really realized the interesting limitations of the material — the way it moves, the way it deforms, all of the physics that are in the material that make it extremely complex," explains Crowle. Prior to that, the team used a more traditional development path, involving lots of concept art and 3D prototypes. But it just wasn't working. "We weren't getting any of those interesting happy accidents, those little imperfections that made it real." Games like Paper Mario and Derrick the Deathfin have used a similar aesthetic in the past, but the Media Molecule team wanted something that both looked and felt like real paper.

By using actual paper alongside internal game jams, the studio managed to pump out all sorts of inventive ideas, including a few that were a bit too crazy for the final product. One such feature involved using the front camera to determine whether the player was wearing glasses, and then having an in-game door that would only open if they were. "We definitely had some quite mad, out-there ideas," says Crowle.

The result of all that experimentation is a game that manages to use the Vita's potential in creative ways without feeling like a collection of gimmicks. Each addition feels organic and fun, and goes along with Media Molecule's history of crafting playful experiences. The paper theme has made Tearaway one of the Vita's most beautiful experiences, but also inspired the team to create one of its best games to date as well.

"I think of paper a little bit like polygons, but in our real world," says Crowle. "There's something a little bit magical about these mundane sheets of material that are around us all the time, but have the potential to become real, tangible objects."

Tearaway is available on November 22nd.