Devastating storm forces the Philippines to rebuild from the ground up

Villages in the Philippines' Leyte province have been decimated by Typhoon Haiyan (IEU Humanitarian Aid and Civil Protection / Flickr).

Typhoon Haiyan has wreaked havoc across the Philippines, leaving a trail of brutal devastation and untold casualties. The Category 5 storm, which struck the nation on Friday, may be the largest to ever make landfall. And although the full scope of its impact has yet to be determined, relief efforts are already plagued by daunting challenges.

The Philippines government announced Tuesday that 1,744 have been confirmed dead, though officials expect that number to rise over the coming days. Thousands more have been injured, with the typhoon's ferocious winds and storm surge leaving more than 600,000 displaced from their homes.

Governments and international aid groups have already sprung into action, donating millions in relief and dispatching emergency assistance to the most ravaged areas, though their efforts have been hampered by the sheer scale of Haiyan's destruction. Buildings, telecommunications, and entire cities have been obliterated across much of the country’s central islands, making it difficult to provide help to those who need it most.

"We have supplies on the ground and we just can’t get them out."

"The biggest challenge right now is logistics," Sarah Crowe, a spokesperson for UNICEF, said in a phone interview from New York Monday evening. "We have supplies on the ground and we just can't get them out."

UNICEF began sending supplies to the area from Copenhagen over the weekend, though Crowe says delivery has been hindered by closed airports, flooded roadways, and frayed communication networks. The New York-based organization is airlifting $1.3 million in supplies to the area, including fresh water, food, and water purification tablets, bolstering ground resources that were already stretched thin by a 7.2-magnitude earthquake that struck the province of Bohol in October. On Tuesday, a 4.8-magnitude aftershock struck the same island, which was also battered by Friday’s storm, though early reports suggest no signs of major damage.

UNICEF is one of several aid organizations operating in the region, joining the Red Cross, Oxfam, and a litany of public and private sector groups that have intervened to provide help. The US and UK have dispatched several naval ships to the area, with the American government donating $20 million in relief. US Marines arrived on the ground Monday, while Philippines President Benigno Aquino deployed military troops to deliver supplies and keep order amid reports of widespread looting and chaos. 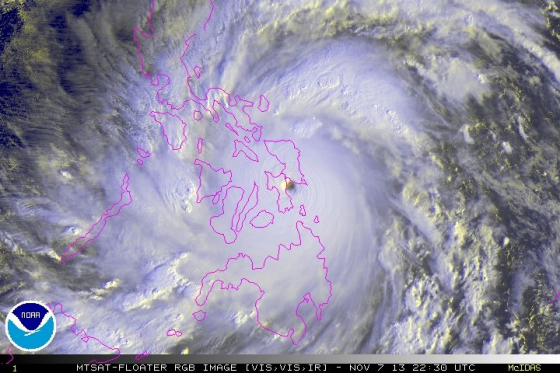 Satellite imagery of Typhoon Haiyan as it approached the city of Tacloban on November 7th (NOAA).

The first priority, Crowe says, is providing food, water, and supplements to survivors, and to the young in particular. According to UNICEF, an estimated 9.8 million people have been affected by the storm — meaning they’ve been killed, displaced, or separated from their families — and at least half of them are children.

The hardest-hit regions remained flooded on Tuesday, and experts say water supplies have likely been contaminated by floating corpses and industrial debris, raising the possibility of a public health crisis. There have been reports of dysentery in the area, and the World Health Organization (WHO) says the disaster may give rise to further disease and infection, calling the health challenges "monumental."

"It is a scene of utter devastation."

Officials are still working to assess the damage, though the emerging picture is one of horror and desperation. Talcoban, a city of 200,000, has been almost entirely decimated by the storm, which crippled the area with sustained 147 mile-per-hour winds and 20-foot walls of seawater. Thousands have been swept away by the surge or buried under the rubble of collapsed buildings, and officials are still working to make contact in regions where telecommunications systems have been destroyed.

"It is a scene of utter devastation," Richard Gordon, chairman of the Philippine Red Cross, said in a statement Tuesday. "Many people have lost their homes, and are in desperate need of food, shelter, and water. It will be a long road to recovery."

The Red Cross today requested more than $94 million to assist with the recovery effort, and has begun soliciting donations through its website. UNICEF, the UN World Food Programme, and many other organizations have launched similar online campaigns. 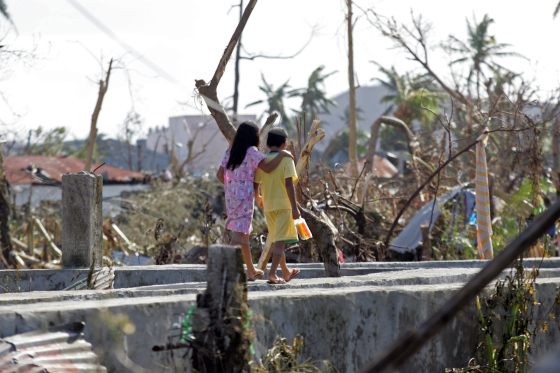 The Philippine government relocated more than 800,000 people ahead of Friday’s storm, moving them to churches and schools, though many of these buildings proved incapable of withstanding Haiyan’s force. The country is certainly no stranger to typhoons — it sees about 20 per year — but officials were not anticipating the massive storm surge that swept across the region last week. Compounding matters further is the fact that the Philippines, a relatively poor nation, has been unable to invest in stronger infrastructure. As Max Fisher of the Washington Post notes, the country's decentralized governance structure may also explain why it has struggled to respond more forcefully to natural disasters, which have become ever more frequent in recent years.

"What my country is going through as a result of this extreme climate event is madness," Sano said in a tearful speech delivered in Warsaw, where delegates this week began discussions on a global climate agreement. "Typhoons such as Haiyan and its impacts represent a sobering reminder to the international community that we cannot afford to procrastinate on climate action."

"effects are going to be felt for a good while to come."

Experts have long argued that climate change increases the risk of severe weather events, but it remains unclear whether the devastation in the Philippines will have any impact on the Warsaw talks.

"It’s an unfortunate situation that we need to have such a terrible loss of life to even give us a slight hope of making headway," Josh Galperin, associate director of the Yale Center for Environmental Law and Policy, said in an email to The Verge. "We live in a world where data and evidence have much less impact on policy than bloodshed, even though it is impossible to directly tie this typhoon to our changing climate. Even though we could reduce the loss of life with proactive policy making."

For now, though, relief workers are faced with far more urgent tasks. The extent of Haiyan's damage will no doubt crystallize over the coming days and weeks, as aid groups race against time to reach survivors. But rebuilding the country — quite literally, from the ground up — will likely take much longer.

"Clearly this is going to be with us for a while," says Crowe, the UNICEF spokesperson. "I don’t think we have any sense of it yet, but its effects are going to be felt for a good while to come."