Startup metropolis: why so many American cities are trying to be Silicon Valley

Startup metropolis: why so many American cities are trying to be Silicon Valley

From coast to coast, tech incubators are being created by local governments

Chicago Mayor Rahm Emanuel announced last week he was launching a new initiative to double the number of tech sector jobs in the Windy City over the next decade, aiming to add 40,000 jobs to the workforce. This follows similar policies put in place in cities like New York, Detroit, Denver, and New Orleans. Every major US city, it seems, has caught the startup bug.

This push is not a faddish response to the recent boom in startup valuations and IPOs — it’s a simple expression of the need for job growth in a post-manufacturing America. "What is happening now is that the nature of economic growth in the US has fundamentally shifted," says Dr. Michael Mandel, chief economist at the Progressive Policy Institute. "It’s an evolution from manufacturing to information and technology."

In the 10-year span between 2000 and 2010, Chicago’s Cook County lost 89,100 manufacturing jobs, a 26 percent decline. Even if Emanuel’s ambitious tech plan succeeds, in other words, it will only have replaced around half of what the city lost from its manufacturing base. Los Angeles has fared even worse, and Detroit, once the emblem of American manufacturing muscle, was recently forced into bankruptcy.

The most popular and oft-copied piece of a tech-centric approach to economic development has been the creation of incubators: hip office spaces where young entrepreneurs can hatch their companies and work on ideas. "In today’s environment, you can create a software company fairly cheaply, and with few people," says Eric Gertler, executive vice president at New York’s Economic Development Corporation. "What is very expensive is good office space, and that is something a city can provide in a way that can be cost effective and scales well. Instead of each company needing to get great internet, a printer, even down to the coffee pot, they can share resources and exchange ideas."

Creating incubators full of fresh-faced entrepreneurs with big dreams certainly makes for good press, but does it actually help to revitalize a city? In New York, the Bloomberg administration put an emphasis on growing the city’s tech sector, and the results, according to Dr. Mandel, have been staggering.

The Big Apple expected to lose jobs in the wake of the 2008 financial crisis, as the city relies heavily on Wall Street to power its economy. And indeed, the number of jobs and the overall wages in this sector fell. But thanks to robust growth in tech, New York City actually outpaced the rest of the country in its economic recovery — its share of the national labor market hit a 20-year high. While the number of private-sector jobs fell 3 percent nationwide, that figure increased 4 percent in New York City. 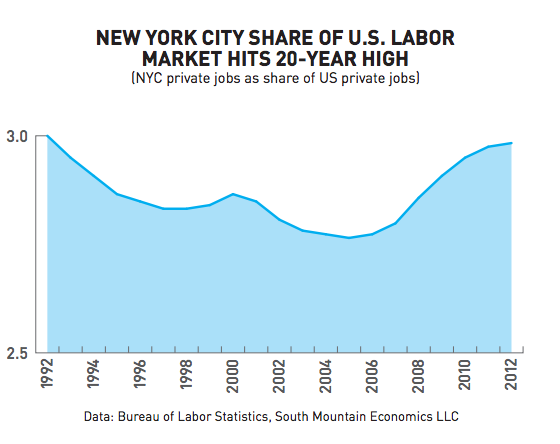 And promoting growth in the tech sector turns out to have a halo effect across industries. "Counties with a higher number of new tech / info jobs between 2007 and 2012 enjoyed substantially faster growth in both overall private employment and non-tech jobs over the same period," writes Mandel in a new study.

The tech sector is no panacea for the nation’s stubbornly high unemployment rate. While big names like Facebook and Twitter have generated global attention for their IPOs, which minted many millionaires and billionaires, those eye-popping stats don’t translate into a a large number of new jobs. Facebook’s market capitalization of $120 billion is larger than McDonald’s, yet the social network employs fewer than 5,000 people, compared with McDonald’s 440,000.

But Mandel’s research on cities that invest heavily in growing their tech sectors found a number of encouraging statistics about the ways in which such investments cut across race and class. The growth in tech disproportionately helped African Americans and Hispanics, two groups with markedly above-average rates of unemployment during the prolonged recession. "Compared to other small-business sectors like hospitality and leisure, technology creates more high-wage jobs and more spillover to the broader labor market," says Mandel.

He is particularly interested to see how things work out in Chicago. "It will be an excellent test case. It has some of the right ingredients, but starts from a much narrower base than New York or Los Angeles in terms of its related industries. We’ll have to wait and see if investment in technology there will create the same kind of virtuous cycle."