We know BlackBerry is a withering mobile brand, but how fast is it crumbling, and who is gaining from its demise? IDC's latest quarterly numbers yield some answers, showing that Android continues to solidify its dominant lead in the smartphone market, crossing the 80 percent threshold to hit a solid 81 percent of all smartphone shipments in the third quarter of 2013, according to the market research firm. Perhaps more impressively, Windows Phone posted a huge jump, increasing smartphone shipments by 156 percent from last year to capture 3.6 percent of all smartphones shipped in the quarter, which IDC rightly calls "amazing."

Poor BlackBerry's smartphone shipments fell more than 40 percent compared to a year ago, and its market share fell from 4.1 percent in the third quarter of 2012 to just 1.7 percent in this year's third quarter. Apple's iOS, meanwhile, posted healthy shipment growth of of 25.6 percent over the third quarter of 2012. Apple also remained in second place over all, but its market share of the total smartphones shipped was actually smaller than this time last year (12.9 percent in 2013 compared to 14.4 percent in 2012), edged out by Android's impressive gains. And as IDC's Ryan Reith postulates: "We believe the absence of a large-screen device may have contributed to Apple's inability to grow share in the third quarter." 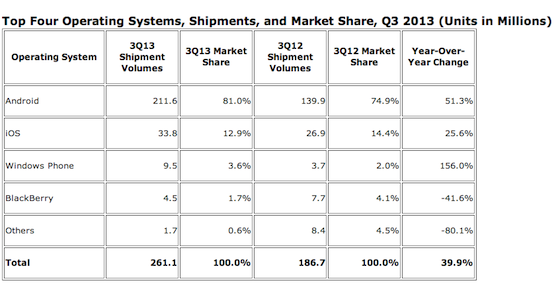 Indeed, Android remained the big success story for another quarter, posting a 51.3 percent increase over last year. And as IDC notes, it was lower-cost devices propelling much of that growth, with the average per-unit off-contract sale price falling to $268 from $313 last year. Overall, the total number of smartphones shipped this past quarter according to IDC's estimates rose by nearly 40 percent from last year, from nearly 187 million to over 261 million.