Afghanistan is growing more opium than ever ahead of US withdrawal

Afghanistan is growing more opium than ever ahead of US withdrawal

An opium poppy harvested in Afghanistan. Opium cultivation reached a record high in 2013, according to a new report from the UN. (United Nations / Flickr)

The US has spent billions of dollars trying to rein in Afghanistan's opium trade, seen as a central driver behind the Taliban insurgency, but a new report suggests that the drug is more pervasive than ever before. The UN's drug agency today announced that opium cultivation in Afghanistan reached a record high in 2013, raising concerns over the country's security and stability ahead of next year’s withdrawal of American troops.

According to the latest Afghanistan Opium Survey, released Wednesday by the UN Office on Drugs and Crime (UNODC), 516,000 acres of Afghan land were used to cultivate opium poppies this year, marking a 36 percent increase over 2012 and surpassing the previous high of 477,000 acres, reported in 2007. Total opium production reached 5,500 tons, the survey notes, up by nearly 50 percent from last year’s total of 3,700 tons.

Afghanistan has long been the world’s leading opium producer, accounting for 75 percent of global production last year, and the Taliban are among the industry's biggest beneficiaries. The militant group uses opium profits to finance its insurgency, though high-ranking government officials, warlords, and corrupt law enforcement officers have been linked to the trade, as well.

Since invading Afghanistan in 2001, the US has spent nearly $7 billion to combat opiate production through the eradication of poppy fields, subsidies for alternative crops, and cash incentives for opium-free regions. Most eradication duties have since shifted to Afghan officials, and the anti-drug campaign enjoys broad international support — but as today's report demonstrates, the opium trade has only become more entrenched over time.

UNODC's executive director, Yury Fedotov, described the survey's findings as "sobering" in a preface he co-authored with Afghanistan’s acting counter-narcotic chief, writing that the persistent opium “virus” threatens to further destabilize the country after international forces leave next year. Speaking to Reuters last month, Fedotov said Afghanistan could soon become a "full-fledged narco-state" without stronger assistance and support from the global community.

"What is needed is an integrated, comprehensive response to the drug problem," Fedotov said in a statement Wednesday. "Counternarcotics efforts must be an integral part of the security, development, and institution-building agenda."

A "virus" that won't go away

Afghanistan’s eradication campaign has proven to be politically unpopular across many regions, and its efforts have been hampered by corruption and violent retaliation from both farmers and the insurgent groups supporting them. Earlier this year, the Afghan army decided not to offer security support for eradication missions in certain areas, citing the high risks posed to its officers. According to the UNODC’s survey, eradication efforts declined by 24 percent in 2013, while violence against eradication teams rose significantly: 143 fatalities compared to 102 in 2012.

Attempts to promote alternative crops have been hampered by persistently high opium prices, encouraging Taliban insurgents and tribal warlords to exert greater control over the trade. The UNODC survey says high opium prices in 2012 likely fueled this year's surge in cultivation, though uncertainty around Afghanistan's future may have played a role, as well, spurring farmers to maximize their efforts ahead of next year's presidential elections and the US withdrawal. 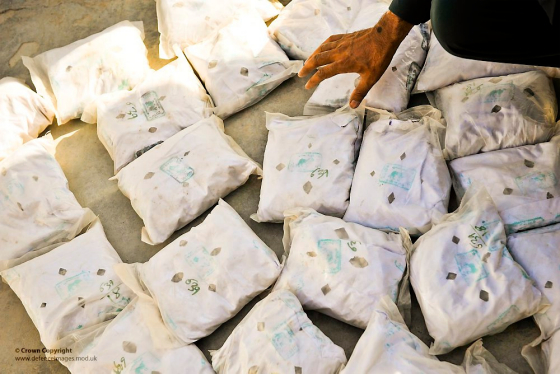 Bags of heroin seized by the Counter Narcotics Police of Afghanistan. (UK Department of Defense / Flickr)

The UNODCs report comes at a delicate time for both Afghanistan and the US, which has had a military presence in the country for more than a decade. President Barack Obama has called for American troops to withdraw from Afghanistan next year, though the country remains unstable, with insurgents, warlords, and various political factions vying for power. Afghanistan's 2014 presidential elections could also mark a turning point for the country, as voters elect a successor to two-term President Hamid Karzai.

It’s not clear whether a small force of American troops will remain in the country after 2014 as part of a proposed bilateral security agreement, though NATO forces have already begun scaling down operations and transitioning control to the Afghan government. Experts have reservations about Afghanistan's ability to secure the country at a time when the opium trade is as vibrant as ever, pointing to the country's lurid history of corruption.

"Inevitably there will be a massive economic contraction in Afghanistan," says Dr. Vanda Felbab-Brown, a senior fellow in foreign policy at the Brookings Institution, and an expert on Afghan security. "It's already happening now, and next year will likely be worse."

Afghanistan has long been among the poorest countries in the world; its economy is largely agrarian, though its mountainous terrain has rendered arable land scarce, and much of its agricultural infrastructure was decimated during the war against the Soviet Union in the 1980s. In light of these challenges, many farmers turned to poppy cultivation, which is expected to return profits this year of nearly $1 billion — 4 percent of Afghanistan's GDP — according to the UNODC.

"There will be a lot poppy in Afghanistan for a long time to come."

Complicating matters further is Afghanistan’s domestic addiction crisis. Although most of the country’s opium is converted into heroin and trafficked abroad, growing numbers of Afghans are consuming it themselves. A 2010 UNODC report found that opiate use doubled in Afghanistan between 2005 and 2009, with the number of heroin users increasing by 140 percent. The survey released today shows an increase in treatment facilities across the country, though decades of war and economic strife have left deep scars on the Afghan psyche, pushing both civilians and security forces to drug use.

With new leadership and American withdrawal now on the horizon, Afghanistan's future remains murkier than ever. It's not clear whether 2014 will bring any substantive changes to the country’s approach to opium, but breaking free from its grip will likely take time.

"The reality is that there will be a lot poppy in Afghanistan for a long time to come," Felbab-Brown says. "If the objective is to end opium poppy cultivation in Afghanistan, that's like saying, 'Well let's move to Mars.' It’s just not going to happen in any reasonable time frame."

A
Andrew WebsterSep 24
Look at this Thing.