PlayStation 4, connected: first impressions out of the box

Share All sharing options for: PlayStation 4, connected: first impressions out of the box

The next generation of video gaming is just two days away. On Friday, the PlayStation 4 will launch in the United States. The consoles and games are only just starting to arrive, and the day-one patch enabling connectivity is only about 12 hours old, so while we'll have much more to say in a full review, here's what we've found so far from Sony's new platform.

First up: this is maybe the coolest thing about the PlayStation 4. Remote Play isn't an entirely new concept — it's been around in some limited way, shape, or form since the PS3 and PSP could talk to each other. But with the PlayStation 4, Remote Play is supported on the system — it's essentially mirroring the screen from your TV to your Vita, anywhere you go, and pretty much any game that doesn't require PS Move or the PlayStation Camera plays in full on the smaller screen.

Setup is easy — enter a code from the PS4 to the Vita and you're done. It's surprisingly responsive at times. Lag gets more noticeable the farther you are from the console / router — it appears to work over the internet as well, but Sony "strongly recommends" staying on your local network. In our first tests, all but the twitchiest experiences were working fine as we moved around both floors of our office.

Remote Play just works — even if it's a little odd sometimes

The best thing we can say about the PS4 Remote Play is that it just works. PS4 titles were meant to be played on larger televisions, which means in some moments you'll be dealing with very, very tiny text on a 5-inch Vita screen, but under the right conditions it works surprisingly well.

But there's a lot to play with on the PS4 before you get to Remote Play.

Out of the box

Rather than shipping the system in a cube like many a previous game console, Sony has dressed up the PlayStation 4 like a laptop. Lift the lid on its cardboard box and three components are immediately exposed: the surprisingly small PlayStation 4 console, a DualShock 4 controller, and a Quick Start guide for setting it up. Underneath the controller and neatly folded paperwork, you'll find the bundled mono headset and cables you need to get started.

If you already have a PlayStation 3 to swap out, your work is practically done. Amazingly, the new PlayStation 4 is actually smaller than its predecessor, and uses practically all the same cables. You can plug in the same exact figure-eight power cable and HDMI cable and be good to go, adding Ethernet or optical audio if you need to.

Besides being impressively small, the PlayStation 4 box is also pretty attractive in a rakish, angular sort of way. It goes for a dark, black, stealth-fighter look that neatly hides the system's optical drive and ports. There are two tiny capacitive buttons on either side of the Blu-ray drive for "power" and "eject," and a single light strip on top of the console.

Then there's the DualShock 4 controller, which takes its traditional gamepad layout and adds a touchpad up front, flanked by "Options" and "Share" (the new "Start" and "Select"), and a large glowing-light sensor that functions both to indicate certain in-game events (it turns red when you're low on health, for instance) and to act as a Move-like wand when paired with the PlayStation Camera. Sony's controller now charges with Micro USB and has a built-in 3.5mm headset jack that supports smartphone headsets, if you're not happy with the mono earbud it provides. 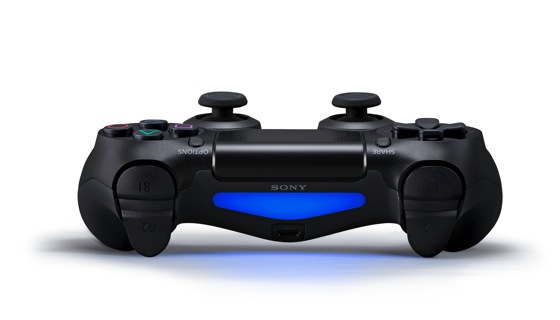 Without the day-one patch, there is very little you can do. Our console shipped with 1.01, and many of the games required incremental system updates. You'll want to download version 1.50  (which only took us about 10 minutes) as soon as you turn on your console.

The PlayStation 4 interface retains a lot of aesthetic choices from PS3's "XrossMediaBar," including serene music and simple, flowing backgrounds. It's very fast and responsive. The familiar first row of small icons has one important, symbolic difference — PlayStation Store is front and center. With the new interface, the company has taken a cue from the Xbox 360 and blurred the lines between games, apps, social media, and its store. 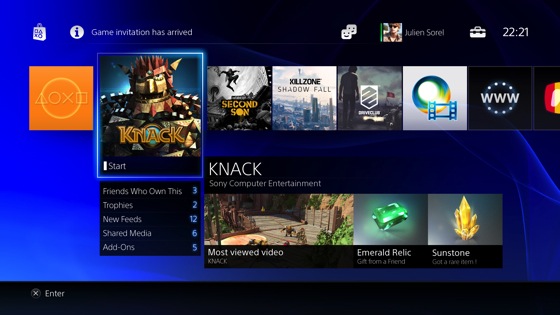 The main menu is a row of icons bookended by "What's New" on the left and "Library" on the right. The former is an aggregate list of all your friends' activities they want to share — trophies earned, videos shared, games broadcasted, etc. The latter, "Library," is a collection of your digital downloads like Netflix, Resogun, and Contrast. Everything in between is a reverse-chronological list of all the games and apps you have, sorted by the time in which they were last opened. And to be honest, it's already something of a cumbersome process to go through it.

The long chronological menu can get cumbersome fast

Each game has its own at-a-glance set of widgets (a four-by-one row of icons featuring things like concept video, game manuals, and recently played maps). Press down to dive into something more defined: custom background, music, a list of trophies and recent activity.

About two dozen games will be available at launch, but only three of those are uniquely next-gen experiences: overly brooding first-person shooter Killzone: Shadow Fall, cartoonish platformer Knack, and side-scrolling shoot-em-up Resogun. Everything else has been or will soon be available on other platforms, including the PS3. A select handful of PS3 games like Assassin's Creed IV and Battlefield 4 can even be "upgraded" for the PlayStation 4 for about $9.99, provided you redeemed the in-package code or purchased the digital PS3 version from your account. 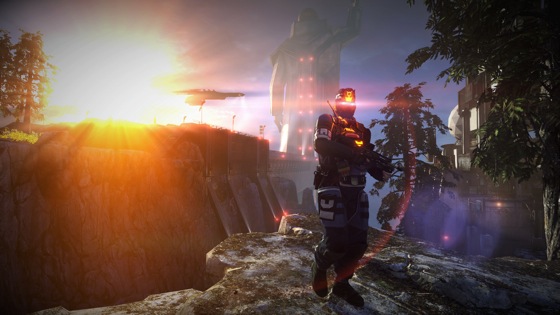 The bad news is that every game you play, disc or no, has to be installed. When we popped Killzone: Shadow Fall, and it immediately consumed 39GB — nearly one-tenth of our 409GB of hard drive space. The good news is that you don't have to wait for those games to install to start playing: two minutes after we popped in the disc, we were able to launch the game, and by the time five minutes had passed we'd made it past the intro cutscene and were actually playing a game.

PS4 games are nothing if not gorgeous

The titles we've tried so far have been nothing if not absolutely gorgeous — as Polygon noted in its review of Call of Duty: Ghosts, the lighting effects in particular stand out in games that appear on both PS4 and previous-generation consoles.

Killzone: Shadow Fall is Sony's own flagship first-person shooter and seems like a prime example of the graphical potential. The Killzone games have always pushed console graphics, and Shadow Fall does a great job a showcasing beautiful scenic vistas of a sci-fi metropolis. Lighting effects are gorgeous, and the game runs smoothly on the PS4. (Other titles, most notably Need for Speed Rivals, did suffer from framerate issues.) The bigger issue with Killzone is story and style — but as with any game platform, we expect the launch lineup to be trumped by more impressive titles (both technically and artistically) as the years go on and developers get more comfortable with the new hardware. 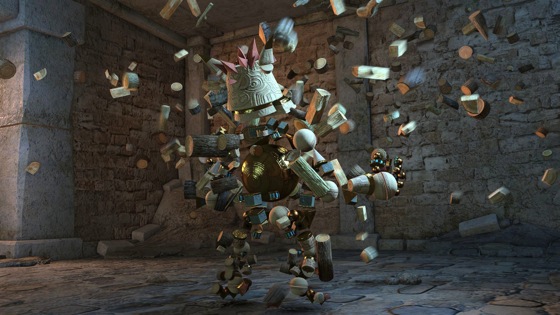 Besides Killzone, Knack is Sony's other major exclusive launch title. It's got an art style reminiscent of a DreamWorks Animation featurette and it plays like an old-school 3D platformer in the vein of Crash Bandicoot. Gameplay is simple: run around, punch bad guys, collect "relics" to grow in size, punch bigger bad guys. It's also unapologetically, frustratingly brutal — you'll find yourself dying a lot and repeating chunks of levels more than you probably care to.

Killzone and Knack are the superstars of the launch day titles

Depending on how devoted a Sony fan you are, though, there could be a surprising number of things to play for free on day one. If you owned Flower or Sound Shapes on PS3 you can download upgraded PS4 versions for no charge. There's also a selection of free-to-play games, including Blacklight: Retribution, Warframe, and DC Universe Online, each of which make their money by charging for in-game items rather than the game itself. PlayStation Plus subscribers get indie titles Resogun and Contrast for free, and make no mistake: PlayStation Plus is now required for online multiplayer. Keep that in mind when you're budgeting this holiday season.

To some degree, you can also control the PlayStation 4 experience with Sony's iOS and Android companion app. You can use your smartphone to access all your PS4's notifications, invitations, and alerts without having to pause your game, as well as send messages to friends and browse the PlayStation Store for things your console can download. The app also lets your touchscreen device act as a second-screen remote in certain circumstances: it's much better than typing on the on-screen keyboard, and can even act as a very basic controller.

The camera works, but there's not much you can do with it

Sony isn't emphasizing the PlayStation Camera at launch, because there simply aren't any retail games that make use of the $60 peripheral. The camera is easy enough to set up, though — just plug it in — and it does do a few things out of the box. You can train it to automatically sign you in to the console when it recognizes your face, and you can say "PlayStation" to utter a few voice commands here and there. Say the name of a game to jump to its icon, "start" to launch that game, "home screen" to jump out, and "back to game" to jump in again. You can also use "power" to turn off the console, and "take screenshot" to capture an image.

There's also The Playroom, an experimental game pre-installed on every PS4 that's initially really fun but got old after about 10 minutes: all you can do is terrorize the poor cute robots that live inside your controller, play a game of air hockey with motion controls, or interact with a robot tamagotchi in augmented reality. It's really just designed to show what the controller and camera can do.

If your notion of a video game console was shaped by the PlayStation 3, you should know that the PlayStation 4 is a bit of a shift. There's no longer any sort of backwards compatibility whatsoever, so if you stick a PS3, PS2, or PS1 disc into the console the PS4 simply won't recognize it. Like on Xbox, you can also no longer play online multiplayer games without paying a fee. You have to be a PlayStation Plus subscriber to do that, at a cost of $49.99 a year.

The new PlayStation 4 also isn't a hub for your personal media. Where the PS3 had entire sections in the UI dedicated to photos, videos, and music, it doesn't seem like there's any way to store or view those on PS4. The console doesn't play nice with external hard drives, USB flash drives, audio CDs, or home-media servers. While USB and Bluetooth mice and keyboards work, there's not much to do with them right now, and Bluetooth headsets won't be supported until a future update rolls out. You can play Blu-ray and DVD discs, though.

We've had only a precious couple days with the PlayStation 4 — and even less time with its online capabilities. At first glance, it feels like Sony's gone a long way toward fixing what ailed the PS3, and toward enabling a much better and more impressive gaming experience going forward. It doesn't feel ambitious like the Xbox One, but it feels like a really solid gaming console. Of course, we're just getting started. We'll have plenty more — including our official review — soon.

Ross Miller and David Pierce contributed to the report.

Good Deal: buy two next gen games, get one free at Amazon and Target