Share All sharing options for: Google imitates the black marker of US government censorship in latest transparency report

Google today released its latest transparency report with a stronger message for its users and the United States government, and more detailed reporting about the types of surveillance US authorities use to obtain information. In a blog post announcing the report, Google imitated the government's infamous black marker of redaction for secret Foreign Intelligence Surveillance Act requests, noting that "the US government contents that we cannot share this information." Google's latest report reveals that governments have more than doubled requests for user data since 2009, not including the secret requests that it is prohibited from discussing. 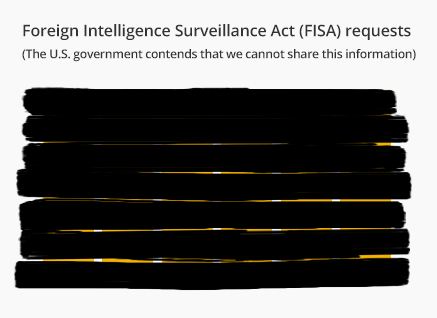 The transparency report comes just one day after Google testified in Congress for the first time since Edward Snowden leaked classified information about US mass surveillance programs beginning in June. Yesterday, Richard Salgado, Google's director of law enforcement and information security matters, said that "the current lack of transparency about the nature of government surveillance in democratic countries... undermines the freedoms most citizens cherish." Google also argues that the secret data requests undermine its business and the security and openness of the entire internet. Since leaks about mass government surveillance became public this year, Google, Microsoft, Apple, and other companies have petitioned the government to relax the secrecy surrounding FISA requests for user data.

In the past three years, Google has gradually increased the granularity of its transparency reports to show more detailed information about the types of requests it receives from the government, and the government's surveillance methods. In March, Google finally revealed the number of National Security Letters (NSLs) it receives each year, but is only permitted to give ranges in intervals of 1,000 due to FBI and Department of Justice restrictions. In today's report, covering January to June 2013, Google breaks out the number of user data requests, giving insight into how much the government uses search warrants, subpoenas, emergency disclosures, "pen register" orders, and wiretap orders to obtain data. For instance, between January and June, Google received only seven wiretap orders under the Electronic Communications Privacy Act. But with data produced in 100% of cases, wiretaps appear to be the most effective method of data collection for the government.

The US is by far the most active government with regard to user data requests, making 10,918 requests from January to June. (India and Germany were second and third, respectively, with 2,691 and 2,311 requests.) In the same period, 25,879 total worldwide government requests for Google users' data were made.