San Francisco startup Coin today announced its first product — a credit card-sized device that digitally stores up to eight credit, debit, gift, or membership cards, and lets you switch between them by pressing a circular button on its surface. You can then swipe the Coin in any conventional reader or ATM machine as if it were the original card itself.

Coin works using a patent-pending magnetic strip that changes on demand. The device ships with a small reader you use to scan cards into the Coin mobile app, which then syncs with the device itself over Bluetooth Low Energy (BLE), the same power-sipping protocol used by many fitness trackers and smartwatches. Coin’s battery lasts two years, the company says, and powers a tiny display that shows the last four digits of the card you’ve currently chosen to use, as well as its expiration date and CVV. Since Coin stays in constant contact with your phone using the same BLE tech that powers syncing with a phone, if you leave it behind at a restaurant, your phone will alert you once you walk away. Coin is up for pre-order today for $50, but will cost $100 for new buyers when it ships in summer 2014.

Two years ago, Coin CEO Kanishk Parashar was working on SmartMarket, an app that let you pay businesses nearby using geofencing. The app wasn’t taking off. "For folks to break their habits, it just wasn’t happening," Parashar says. "It was a bit of a chicken and the egg problem," he says. But then he looked around and saw Square readers everywhere. People weren’t interested in geofencing, he speculated, because people would just take out their credit cards and pay anyway. "[The Square reader] works with everything that can pay," says Parashar, "so why not build something that can pay everywhere?" This duality is at the center of Coin, his latest endeavor. Whereas a Square reader can accept any credit card, he says, Coin stores all your credit cards, and lets you pay using any one of them.

A Square reader can accept any credit card, but Coin stores all your credit cards

Coin is based on a device Parashar hacked together during months learning soldering at a local TechShop. The device plugged into his phone, which held credit card data, and had a blade on its side with a magnetic strip, which could be swiped through any conventional credit card reader. Parashar’s device was far from an elegant solution for payments, but served as proof of concept enough for him and a small group of others to quit their day jobs and begin working on a real prototype. They started calling their idea Coin, and decided that it should only have one button. All you’d need to remember before using a Coin is that before handing it over to a cashier, you'd have to tap a button on its surface — the button serves both to activate the device’s magnetic strip and to display which credit card number you’re swiping so you don’t mis-swipe.

Parashar has made a lot of guesses in building Coin, like how often it should ping your phone to see if it’s been lost and how many cards it should hold. Coin can hold eight cards, but this number isn’t theoretical as much as it is practical. Parashar estimates that most people don’t have more than eight cards in their wallet, which is convenient, since tapping on the Coin to cycle through 25 cards would be a pain. And of course, since Coin is the size of a credit card, you can keep it with you along with other cards.

The idea of having all your credit cards in one physical object sounds scary, but Parashar wasn’t intimidated from the outset. "An online wallet holds your information," he says, "and we’re just like that, but on the ground. It’s not illegal [to copy your cards] because it’s your own information." Coin data is encrypted on your phone and on the card itself, but once again, if you lose your Coin, it becomes useless within a few minutes. But how many minutes, exactly? Parashar hasn’t yet decided on exactly how often Coin checks in with your phone, but says that it will likely be between one and ten minutes, and may even be customizable. 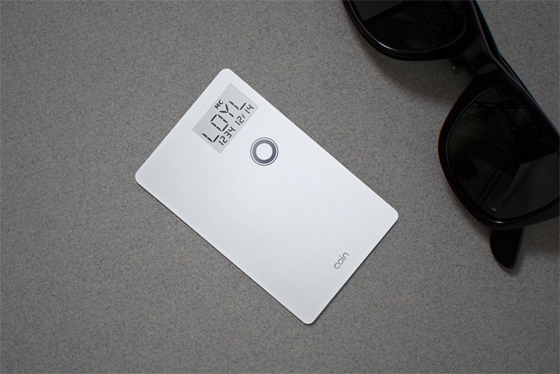 So doesn’t this mean that if your phone dies, your Coin is useless? Perhaps it was this conundrum that attracted the attention of Osama Bedier, the former head of Google Wallet, who’s an investor in Coin. Bedier spent years attempting to make Wallet the NFC payments standard of future phones, but Google abandoned his work to pivot the product into yet another PayPal competitor. "[Bedier] sees scale at Coin … where he didn’t see scale in current solutions," a company spokesperson said on Bedier’s behalf. And for what it’s worth, Parashar says he hopes to develop a way to let users activate Coin (or disable the "lost" feature) even when a phone’s not around.

"The reason nobody has tried this is because the tech we’re using just came around in 2010, like Bluetooth Low Energy," says Parashar. "It wasn’t even stable until then, and the screens we’re using were also [invented] after 2010." Fortunately, Parashar has people on staff who are familiar with fitting lots of tech into small spaces. Two of Coin’s electrical engineers worked on the Nike+ Fuelband, and another, Guilherme De Paula, won a Bluetooth Innovator of the Year award in 2012 for his work on wearable medical devices using Bluetooth Low Energy. In other words, Coin’s team is a hardware team, not a software-payments team like so many startups today.

"The reason nobody has tried this is because the tech we’re using just came around in 2010."

The approach has worked before for Square, which actually employs at least one investor in Coin, according to Parashar, though he wouldn't name the specific person. And Parashar does mention Square often. The company inspired him to not shoot for the moon too soon, as NFC perhaps did, and instead try to reinvent a tool people already know how to use. NFC is a great idea, after all, but the hard part for Google and other supporters was changing both corporate interests and consumer habits — convincing people to ditch their credit cards and start tapping their phones against NFC readers. "Change is difficult, because you have to take it across the board," says Parashar. "Square started the evolution … There were companies making smaller and better readers, but Square was able to really make it marketable."

Coin has a far broader consumer appeal than Square

The difference here is that Coin has a far broader consumer appeal than Square — a product built initially for small businesses. Assuming Coin works, it could end up being very useful for everyone from design nerds to moms and dads, because the value it offers is obvious: on the surface, it takes eight pieces of plastic and turns them into one piece of plastic. Everyone is looking for new ways to slim down their wallets, and Coin does so without changing your purchasing behavior. Yes, you have to go through syncing credit cards onto the device the first time, but at least there’s no QR code to scan each time you want to pay, or app you have to download every time you want to participate in a restaurant’s loyalty program. We might pay with QR codes and NFC years down the line, but Square and Coin seem to say that these methods are still out of reach for lots of people.

Coin is a reminder to consumers and to entrepreneurs that money doesn’t need to fit into a card or an app. Money can have a battery, and a screen, and anything else that helps you better spend and manage it. An electronic card is just the next step.