Can police use social networks to predict who'll die from gun violence?

When gun violence makes the news, it's often described as an epidemic, implying that the violence is out of control on a massive scale, akin to a rampant disease. The term is used largely as a buzzword — but new research out of Yale University suggests that there's more than just a semantic connection between gun violence and the behavior of diseases.

Stray bullets, while tragic, are relatively rare — meaning you can't exactly "catch a bullet" the way you would an airborne disease, explains study leader Andrew Papachristos, an associate professor of sociology at Yale. Rather, "the vast majority of gun violence, the everyday violence that we see in our streets, is actually passed on person to person, much more like a blood-borne pathogen." The idea behind Papachristos' study, essentially, is that if you spend time with people who have been shot, carry a gun, or engage in risky behaviors, your own risk of being shot increases.

You can't exactly 'catch a bullet.'

The study, published this week in the American Journal of Public Health, pulled public arrest and homicide records to look at a social network of people who were linked by being arrested together for the same crime — indicating that they tend to be involved in risky activities, and share social connections with others who do the same (you're more likely to rob a bank with someone you know well, for instance, than a complete stranger). The data was taken from a six-square-mile, high-crime area in Chicago. 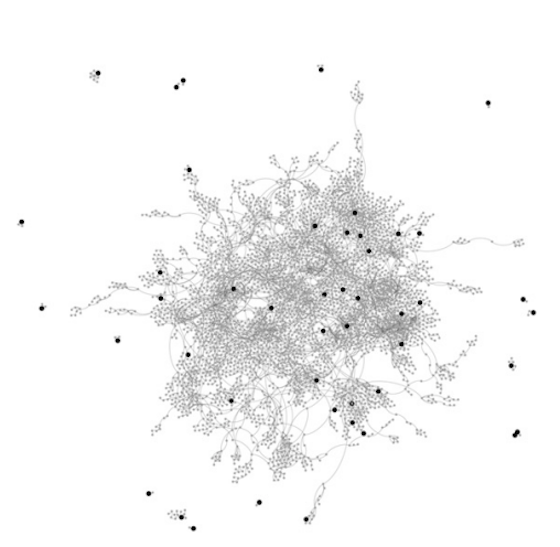 The arrest network of the study's Chicago neighborhood. Homicide victims are shown in black, with many connected in a large cluster.

While it may seem that gun violence and its victims are spread randomly, Papachristos' network analysis shows that much of the violence is highly concentrated. In Chicago, the homicide rate is around 14.7 deaths per 100,000 people, and the neighborhood in the study has a rate of 55.2. Just being arrested increases the rate of being killed by a gun by almost 50 percent. While these numbers are high, geography and being arrested don't tell the whole story about one's risk of being shot. By simply being connected to a homicide victim via this network, a person's risk of dying at the hand of a gun rockets up 900 percent.

Looked at another way, the largest group of people that are connected to one another via this arrest network contains just 4 percent of the people in the neighborhood — and yet represents 41 percent of the homicide victims for the area. Additionally, there are many smaller clusters in the arrest network that also contain homicide victims. The violence in this neighborhood is concentrated to a small fraction of the people who share these particular social connections and risky behaviors. However, the risk for becoming a victim in this network is not uniform. As the degrees of separation between an individual and a homicide victim increase, the risk of becoming a victim decreases: each additional connection separating the two individuals lowers one's risk by 57 percent.

It seems simple in hindsight: your risk of being shot increases if you know someone else who's been shot. But according to John Hollywood, a crime researcher at RAND Corporation, the research "could be a really useful contribution" towards preventing gun-related violence. "It was just good to see that some people have an idea and they go outside the box," Hollywood said. "And in this case, going outside the box really paid off."

"You're aware you're at risk. What are you going to do?"

In fact, the findings are already being used by Chicago law enforcement to track networks of people at risk and offer educational interventions. "The typical reaction is that they are riveted," Papachristos said of those alerted by the Chicago Police Department. "What it does is it kind of gives them a little warning that says ‘You've got to be careful. There's shooting going on around you, and you should probably be aware of it.'"

For Papachristos, data like this offers the opportunity for proactive interventions — in the same way that public health experts can intervene to mitigate the spread of illness. "You can condemn certain behaviors," he said, likening the scenario to the spread of HIV. "Or you can figure out how to get clean needles, condoms, and education to the people who are most at risk." At the very least, Papachristos points out, more information makes people aware of their choices. "You're aware you're at risk," he said. "What are you going to do?"