Microsoft launched Internet Explorer for Xbox 360 last year, but the software company didn’t fully integrate its Kinect sensor into the app at the time. While there were some limited voice controls, Microsoft’s Xbox One version of Internet Explorer appears to be greatly improved over the 360 version. On Xbox One you can now use a variety of gestures to navigate with Kinect alongside voice commands. Reaching out and grabbing the page initiates the navigation, and moving your hands up and down will pan. Microsoft says you'll also be able to pull a page to zoom in or push it away to zoom out.

Similar to the Kinect dashboard navigation, you can hover over links on a webpage and simply gesture to click on them. If there’s a number of links close to each other then Internet Explorer will zoom in to make it easier to pick between them. The voice controls are also improved, allowing Kinect users to scroll up and down, browse to, or click on pages. If you have The Verge in your favorites then you can simply say "Browse to The Verge" without having to repeat the full URL. 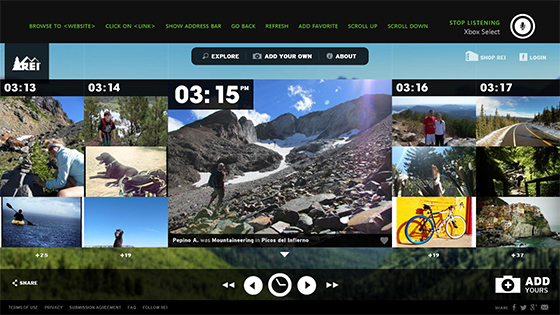 Microsoft has also updated the backend and functionality of Internet Explorer for Xbox One. The latest HTML5 and CSS3 standards are supported, along with options to pin sites, open multiple tabs, inPrivate browsing, SmartScreen safety filtering, and Cookie / Do Not Track protections. All of this new functionality is combined with the existing SmartGlass app that allows Windows 8, Windows Phone, Android, and iOS users to navigate an Xbox One with a smartphone or tablet. Microsoft is also adding the option to push sites from a phone and tablet to the TV and back again with SmartGlass. Internet Explorer for Xbox One will debut alongside the new console on November 22nd.