Low-cost phones usually aren’t very exciting. They’re slow, or chunky, or outdated — none of which is too surprising for the price. But Motorola bucked the trend this week, announcing a surprisingly interesting smartphone for just $179 off contract: the Moto G. Though it falls pretty far from this year’s best, the Moto G doesn’t fall so far that it’s worth ignoring. And in fact, it could be one of the better off-contract choices out there. 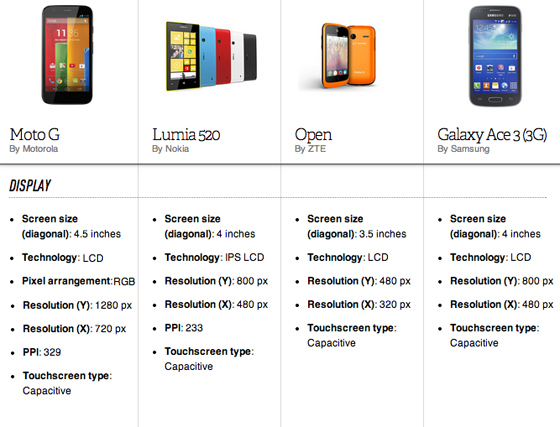 The Moto G blows past a lot of low-priced phones

When you look around the landscape of low-cost phones, there’s really not much worth paying attention to. Below the Moto G are devices like ZTE’s Firefox phone, which hits a super low price but doesn’t have much else going for it; and above the Moto G are devices like the Galaxy Ace 3, which is just expensive enough that it’s not quite the great deal you might be hoping for.

But the Moto G could be that deal exactly: it’s just about what you’d spend for a good on-contract device, except it’s not on-contract. With a 4.5-inch, 720p display and a Snapdragon 400 processor, the Moto G wouldn’t even sound immediately out of place among a carrier’s subsidized lineup. It has a similar build and the same great style as the Moto X too.

And compared to some of the best low-cost competition, the Moto G really does stand out. While the Lumia 520 — a stylish Windows Phone that you can pick up for around $150 — should have enough power for its price, it includes a smaller display, a lower resolution, and a lower capacity battery. On the other hand, there's a good chance the Moto G's camera won't be stellar, as it's an area where even the Moto X struggles, and Nokia has done a good job when it comes to photography on its Lumia series.

Unfortunately, you're stuck on 3G for now

But nonetheless, it means there's another appealing choice for those looking to save a lot of money. Sure, none of these phones include LTE (for a great off-contract device with LTE, you’d have to jump up to something like the $349 Nexus 5), and none of them are going to be incredible performers next year, but the field is getting better fast. And right now, the Moto G is easily one of the most enticing devices for someone looking for a bargain on a serious smartphone.

There may not have been a ton of new products this week, but a couple exciting ones did show up:

Correction: the Moto G has an LCD display, not an AMOLED display as our database page initially noted.