The Zaatari refugee camp in Northern Jordan, home to many who have fled war-ravaged Syria. (Flickr / UK Department for International Development)

Syria's bloody civil war took an even deadlier turn last month, when experts confirmed a polio outbreak in the country's eastern region. The flare-up, Syria's first in 14 years, has triggered an urgent response from aid groups, which are trying to stymie the virus through a massive vaccination drive across the Middle East. But experts warn that such efforts may not stop polio from extending well beyond the region, jeopardizing a global campaign that has pushed the virus to the brink of elimination.

In a letter published in The Lancet this month, German scientists Martin Eichner and Stefan Brockmann write that the outbreak in Syria could soon spread to Europe, which has been polio-free for more than 10 years.

Polio lives in the intestinal system and can be transmitted either orally, from the coughs or sneezes of an infected person, or through contact with infected feces. Paralysis is rare yet devastating, killing some and afflicting others for a lifetime. Immunizations have wiped out polio across the developed world, though Eichner and Brockmann say Europe may be vulnerable.

"Vaccinating only Syrian refugees... must be judged as insufficient."

The authors base their argument on two primary factors: the millions of people whom have fled Syria during the war, seeking refuge in Europe and neighboring countries; and the widespread use of the inactivated polio vaccine, known as IPV, rather than the oral polio vaccine (OPV), which is based on a live form of the poliovirus. OPV was discontinued in Europe and the US after it was determined that the vaccine could lead to rare cases of acute flaccid paralysis — a key symptom of paralytic polio that results in sudden weakness, paralysis, and loss of muscle tone.

IPV has proven to be very effective at preventing polio infection and migration, but it doesn't offer the same level of protection as OPV. Patients treated with IPV can still be infected with wild poliovirus — the naturally occurring virus that causes polio — and transmit it to others, usually without any obvious signals (only about one in 200 infectees show signs of paralysis).

As a result, the authors warn, the virus may not be detectable until after a year of "silent transmission" across Europe. Countries with comparatively low vaccination rates, such as Austria (83 percent) and Ukraine (74 percent) would be particularly vulnerable, prompting Eichner and Brockmann to call for more stringent surveillance and aggressive vaccination across the entire continent.

"Vaccinating only Syrian refugees — as has been recommended by the European Centre for Disease Prevention and Control — must be judged as insufficient," they write. “More comprehensive measures should be taken into consideration.” The authors call for more routine sewage screening within Europe, since poor sanitation can allow polio to spread.

A vigorous international vaccination campaign has nearly eliminated polio across the globe, though it remains endemic in Afghanistan, Nigeria, and Pakistan, according to the World Health Organization (WHO). So far, experts have confirmed 13 cases of polio in Syria's Deir al-Zor province, and investigations into nine other cases are ongoing. The WHO last week confirmed that the polio strain found in Syria originated in Pakistan, and that it is closely linked to the strains discovered in Egyptian, Israeli, and Palestinian territories over the past year. Prior to these cases, the Middle East region had been polio-free for 10 years. 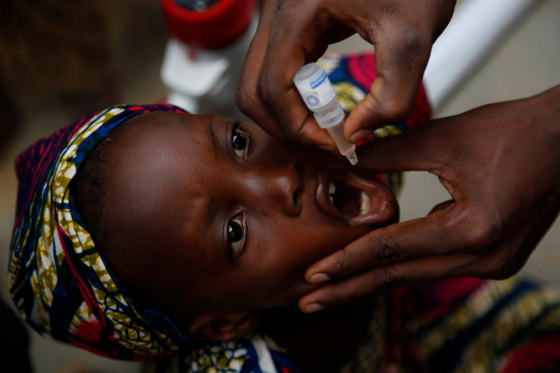 Syria kept polio at bay for more than a decade, but civil war has sent the country into disarray. More than 100,000 people have been killed in Syria since the uprising against the government of President Bashar al-Assad began in 2011, forcing more than 2 million to seek refuge in neighboring countries. The war has had a devastating effect on Syria's public health system, with immunization rates plummeting from 90 percent to 68 percent over the past two years.

Dr. Bruce Aylward, head of the WHO's polio program, questioned Eichner and Brockmann's claims last week, saying that the Syrian outbreak poses no specific threat to Europe, and arguing that the disease could just as easily be transmitted from other polio-endemic countries with high expatriate populations in Europe.

Brockmann notes that vaccination coverage can vary widely across communities in Europe, and that wider outbreaks could stem from groups that refuse immunization. Last week, the WHO warned that Ukraine is at risk of a polio outbreak due to growing public distrust of vaccinations.

"There may be some subpopulations of sufficient size with really bad vaccination coverage," Brockmann writes in an email to The Verge. "Given enough introductions of wild poliovirus ... into a country, it may only be a matter of time until one of them is reached by the infection."

"polio anywhere is a threat to children everywhere."

There are pockets of anti-vaccine communities in the US, which has been free of polio since 1979, though vaccination rates remain high. The Centers for Disease Control and Prevention (CDC) does not consider the country to be at risk. The Syrian case, officials say, only underscores the importance of immunization.

"Cases of polio in other countries are important reminders that the disease could be brought into the US and that high vaccination coverage remains important to protect people against polio," a CDC spokesperson says in an email.

It's still unclear whether Syria's outbreak will have major health consequences for other countries, though the global community is taking the threat seriously. Both the WHO and UN have launched massive vaccination campaigns across the region, aiming to immunize more than 20 million children in Syria, Turkey, and five other nearby nations.

Officials say it is the largest vaccination effort ever launched in the Middle East, though there are serious concerns over the safety of foreign experts working in Syria. International groups have reported difficulties in gaining access for aid workers, adding that both Assad and opposition rebels have offered little cooperation. Acting swiftly, officials say, remains critical to stemming the spread of polio.

"The polio outbreak in Syria is not just a tragedy for children; it is an urgent alarm — and a crucial opportunity to reach all under-immunized children wherever they are," Peter Crowley, UNICEF's chief of polio, says in a statement published this month. "This should serve as a stark reminder to countries and communities that polio anywhere is a threat to children everywhere."