Treasured moments? Inside the weird world of 4D prenatal portraits

Share All sharing options for: Treasured moments? Inside the weird world of 4D prenatal portraits

I’m not usually a “god” person but the first time I saw a 4D* scan of my unborn daughter I started to feel like something else was going on in the universe. Just 12 weeks after conception I could make out the two hemispheres of her brain and watch her suck her thumb. My mom said the barely post-zygotic life form definitely had my grandfather’s brow line. Anti-abortion arguments suddenly became something I was willing to consider: although this was something my partner and I had created together, it was nothing any person could create with 3D printers or tiny Legos. Some other force was guiding its construction and it was difficult to attribute that force entirely to nature, as I do with most god-related questions.

Doctors have used sonar-like sound waves to image fetal development for decades — ultrasound is typically used to determine gender, measure body parts, and view a baby’s first movements. GE’s Voluson E8 scanner is a beast of a machine that’s built to capture fetal development with unprecedented detail. An ultrasound wand is attached to a computer, monitor, and extended keyboard with backlit buttons that say funny things like “4D” and “3D” or just a pictogram of a woman’s naked midriff. Eight glowing sliders, nine rotary encoders, and a built-in touchscreen are reminiscent of a tricked-out MIDI controller. It looks simple enough that a child could use it, but trained nurse-technicians and doctors are the only ones legally qualified to assess the resulting images for possible fetal defects. A dark spot on a fetal belly might not look like much to a parent, but “anechoic” areas like these can be a sign of backed-up fecal matter in a developing intestine. We can assume that GE developed the Voluson line to improve prenatal health care, but no matter how clinical the operator might be, it’s still the first photograph in the history of the human being in question — and that makes it something of an emotional tool as well. Where my parents only had a ghostly 2D prenatal view of me in the early ‘80s, my partner and I are able to look our fetus in the eye while she’s still swimming in amniotic fluid.

While you can certainly see how such high resolution could be medically helpful, it feels like this piece of advertising is aimed at expectant parents more than it’s aimed at imaging professionals. HDlive is a marketing term that any sports enthusiast could understand. Tom Cruise was so enamored with an ultrasound machine that he bought one for unlimited home viewing of Suri while she was still inside Katie Holmes — it was a celebrity pseudo-endorsement that gave birth to the field of nonmedical prenatal portraiture.

I am not the kind of person who can pretend to enjoy photos of newborns — if I was judging an interspecies beauty contest for infants, humans would certainly win last place. When otters, kittens, and horses are born they look like adorably proportioned versions of their parents. People babies, on the other hand, look more like earthworms: squashed-up bundles of fleshy folds that are only vaguely reminiscent of the beings that created them. Does that make me awful? I’m sorry. 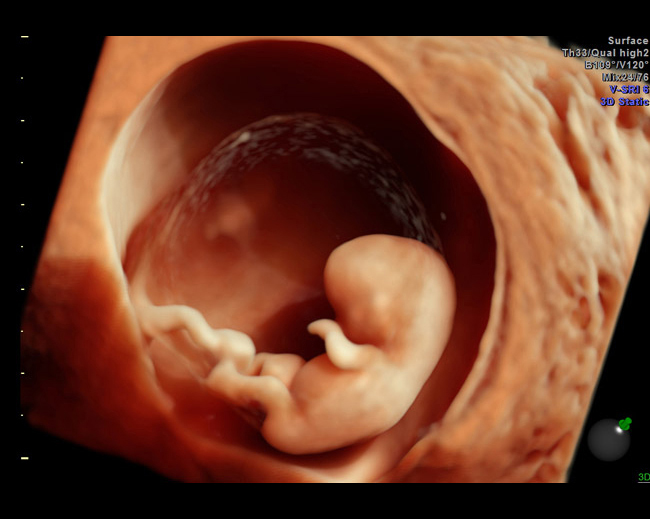 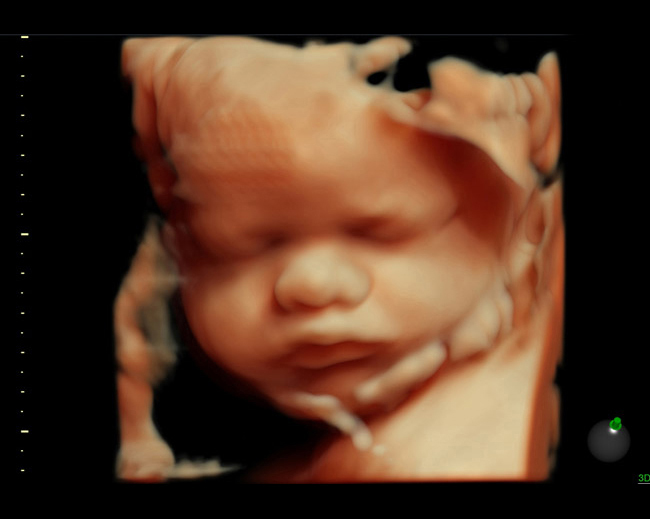 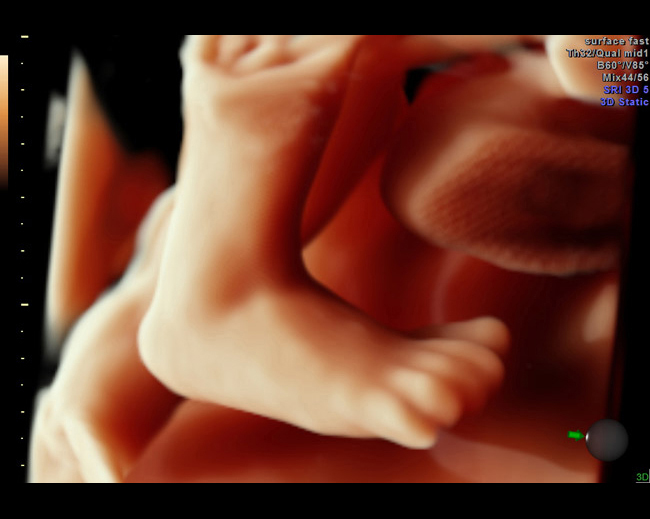 So it was with a distinctly geeky outlook that I booked a Platinum Package for my partner at Treasured Moments Ultrasound. It’s one of many companies offering an unabashedly nonmedical session with a Voluson machine — it’s set up like a doctor’s office, but there are no doctors around. Signs at the front desk encourage visitors to “Please like us and check in on Facebook.”

In a darkened room, the nurse-technician turned on a Pure Moods-esque compilation of soothing music and began recording our half-hour session to a DVD. The Voluson was jacked into a projector and two external monitors for easy viewing — our girl had her face pressed up against the placenta, so my partner rolled over on her side and drank a glass of cold water to “wake baby up” and encourage her to move around. The technician couldn’t make any medical observations, but she was an expert in positioning both mother and child to get a clear view of the face. It’s here where the lines between medicine and entertainment became blurred. Treasured Moments bills its service as “a once in a lifetime bonding experience,” so we heard a lot of innocent inferences like “she keeps her eyes open, so we know she’s curious,” and “she’s keeping her feet up [in front of her face], that’s her way of telling us she’s done.”

At every moment of clarity our technician hit the “print” button — soon, the scroll of thermal-ink portraits was so long it reached the floor. In the lobby we waited as the receptionist prepared our entire package: for $148 we got 38 small black-and-white prints, 23 glossy 3 x 5-inch prints, three 8.5 x 11-inch portraits, the 30-minute DVD (complete with Enya soundtrack), four wearable buttons, and, my personal favorite, a stuffed frog that plays our baby’s actual heartbeat when you squeeze it. As we left, a family of 10 piled into the observation room; excited squeals and laughter soon filled the office.

As amazing as our Treasured Moments experience was, I can’t really say it felt like an incredible bonding experience with my partner or my child — it felt more like a high-tech investigation of reproductive science with vaguely philosophical overtones. We did it for fun, like a photo booth at a carnival, and maybe to capture a little bit of history — the prenatal portrait studio itself might be a relic of the past in the not-too-distant future. 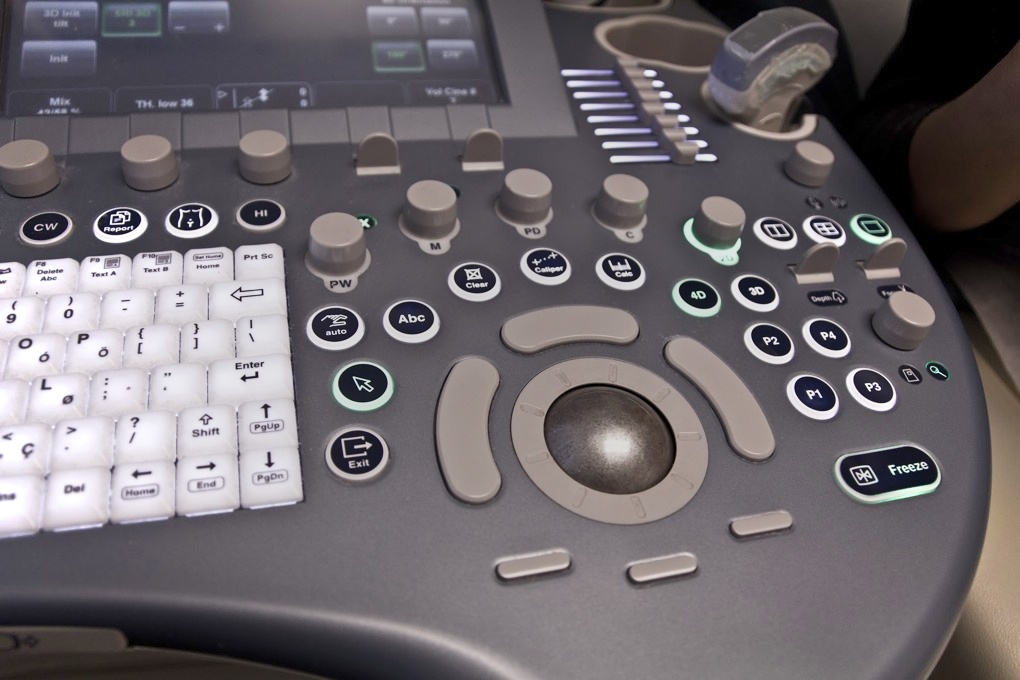 If you hack a Voluson E8 hard enough you can produce EDM with it.

“Years ago, we used to get our feet X-rayed in shoe stores — God only knows what the consequences were!” Michael Lewis is a distinguished professor of pediatrics, psychology, psychiatry, biomedical engineering, and education at the Robert Wood Johnson Medical School at Rutgers University — he’s also written a small library of books on child development. To say he’s seen a lot of fads since he published his first paper in 1961 would be putting it mildly. “These images require the capacity to image the fetus, to go through the tissues. There’s no radiation, no X-ray … on the other hand, any of these things which are unnecessary to our health have some risk associated.” While Dr. Lewis isn’t overly concerned about the propagation of ultrasound waves across fetal tissues, he sees a subtler societal risk in the very existence of machines like GE’s Voluson E8 — it might tell us more than we want to know. And it’s extraordinarily expensive, around $20,000 a pop.

“GM used to say ‘Progress is our product’ [as a slogan] —it’s very typical of 21st-century Americans. We tend to think in terms of progress. I’m all in favor of choice. But if that choice is going to cost, the consumer will pay for it.” Two obstetricians I spoke to say two or three ultrasounds during pregnancy is normal; others say they’re not necessary at all. Having a 4D scan is one of those new choices mandated by the march of progress, but it’s difficult to say if having such detailed information about a fetus is good or bad. As the amount of data we know about our unborn children grows, so does the tendency to “tailor” the rest of pregnancy — that is, whether we treat unwanted conditions, leave them alone, or terminate the fetus altogether. China’s one-child rule is the obvious example, using now-common gender testing to decide if a fetus lives or dies. If a reluctant parent discovers a crippling anomaly in the first trimester with the help of a high-resolution scan and decides to terminate, is that a good thing or a bad thing? It depends on your point of view, of course — but one thing it’s definitely bad for is the consumer’s pocketbook.

Does something make the world better just because it’s amazing?

“If it costs, you have this barricade between people who can and can’t afford to do it. The poor become disenfranchised, which is something the medical folks feel is good to do. In a certain sense my objection is to procedures in general that are unnecessary,” says Dr. Lewis. “We know that American medicine is terribly inefficient in terms of unnecessary procedures — it costs our society and there’s no demonstration that it does any good.” This might explain why GE seems to be marketing the Voluson to consumers just as much as it is to doctors — they know they can make a profit from the novelty of technology, whether or not that technology is making things better. There are, of course, instances where high-resolution ultrasound can alter the course of a pregnancy, but its mere existence as a high-cost add-on might eventually widen the gap between rich and poor.

Does something make the world better just because it’s amazing? This is the core question of technology for me, and one that GE’s Voluson machines ask point-blank. High-resolution ultrasound is yet another piece of the already complicated moral puzzle of medicine. Just as grim manufacturing practices can sour the experience of using a smartphone, the excesses of modern medicine are causing moral and economic dilemmas that no one is quite sure how to answer. “Medically necessary” is a malleable term at best, and when you throw prenatal care into the mix it becomes even murkier. Do we continue to develop and deploy sometimes-useful but hyper-expensive machinery into the healthcare economy, or do we rely on simpler and cheaper methods that already work most of the time? Should we continue to spend 60 to 70 percent of our health costs in the last six weeks of life, or should we distribute those funds to more able-bodied members of society? As we move toward a system of national health care, we should expect big questions like these to become a more central part of our daily conversation — it may well be that we’re approaching an age where we have far more choices than we can deal with rationally.

*The fourth dimension here is time. Technicians can use frames captured at different moments to create a temporal composite of the subject.