Refugees from the canceled Courier program make a push into hardware

In the two years since Paper for iPad launched, creator FiftyThree has witnessed dozens if not hundreds of styluses compete for the crown of “best stylus.” Today, the company has finally thrown its hat in the ring with Pencil, a Bluetooth Low Energy (BLE) stylus for tablets. FiftyThree’s first hardware device ships today in two models: walnut hardwood, for $59.95, and aluminum “graphite,” for $49.95. The walnut model has built-in magnets, like the Applydea Maglus, so you can stick it to an Apple Smart Cover, or to your fridge. Each Pencil also has an “eraser” on its top, so when you flip it over, Paper automatically activates its eraser tool. The device comes with an extra tip and eraser, and also ships with Paper’s full range of digital brushes, like the watercolor brush, which usually retail for $1.99 each (or $6.99 as a pack) inside the app.

Pencil, perhaps, is the first Bluetooth stylus that normal people will love. Unlike with most Bluetooth styluses, pairing Pencil with an iPad doesn’t require you to flip any switches on the device, or make a trip to the Settings app, or press and hold a physical button until it pulses or makes a sound. All you do is press down with Pencil on Paper’s on-screen pairing button for a few seconds. FiftyThree has trademarked the process, which it calls “Kiss to Pair.” Since Pencil has no power switch, it’s always ready to be used.

Thanks to BLE, the device can survive for a month of normal use without a charge, FiftyThree says. When you do need to recharge Pencil, you slide out its inner battery compartment, which is attached to its tip, and plug it into any USB port. If you run out of battery power, Pencil still works like any capacitive stylus but won’t let you take advantage of its most enticing new features: palm rejection and blending. Palm rejection is just what it sounds like. When Pencil is active, you can rest your hand on the iPad’s screen as you draw or write, since Paper won’t register the side of your hand as a stray touch. Some apps have attempted palm rejection with passive (non-electronic) styluses — where the app attempts to differentiate between large and small touches on the screen — but to less successful effect.

On the other hand, since Paper knows you’re using a stylus, it affords FiftyThree a new degree of flexibility when creating new features only accessible using your hands. Blend, the first such feature, lets you smudge and pull on ink with your finger as if it were charcoal on a pad of paper. “Blend gets back to what we originally tried to do with Paper — take creation out of menus and out of UI and put it back into people’s hands, and Pencil extends that quite a bit more,” says Andrew Allen, designer at FiftyThree. “You don’t even need to interact with the tray — you just flip to erase, or use your finger to blend colors.” Pencil was codenamed “Charcoal,” in fact, since the utility of charcoal isn’t just in its chalky, dark characteristics, but in how you can manipulate it on paper with your hands. “When you have a tool, it frees your hand to do the natural things you’d do with your hand” — like smudging or flipping a page, which Paper still allows — says hardware designer John Ikeda. Blend only works while Pencil is active, and that’s the point. “A piece of paper knows the difference between your finger and your pencil,” says Ikeda, and so should the Paper app.

Paper contains a tasteful mix of real-world metaphors, like a virtual notebook to hold your sketches and uniquely digital interactions like Rewind, which lets you undo by swiping two fingers in a circle. To FiftyThree CEO Georg Petschnigg, designers should always keep both the real and digital world in mind. Paper isn’t as much of a "hybrid" experience as it is a logical expression of the year we live in — an era where digital objects haven’t replaced their analog counterparts wholesale, according to Petschnigg. The best experience is often a combination of the both, he says, and he views Pencil in the same light. Steve Jobs may have fervently rejected styluses as a means of interacting with touchscreens, but Petschnigg says he can’t imagine a world without them, since they offer a more precise means of drawing on a digital screen. He agrees with Jobs that styluses shouldn’t be the primary means of using touchscreens, however. 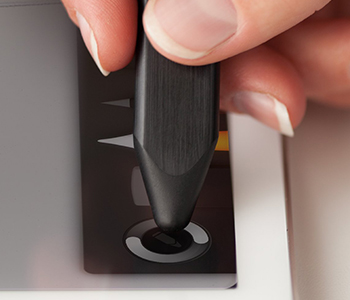 Steve Jobs may have fervently rejected styluses, but Petschnigg can’t imagine a world without them

In his past life at Microsoft, Petschnigg led the team building Courier, a clamshell tablet prototype that fascinated the tech world with its casual take on computing, combining touch interactions with a radial menu interface for styluses. In Courier, you were meant to switch between a stylus and your fingers effortlessly as you moved about the interface. Microsoft killed the project, but Petschnigg’s desire to build Courier — or to perpetuate the spirit behind it — remained, and eventually took on the shape of Paper. He invited some of his former colleagues along for the ride, including John Ikeda and Jon Harris, two hardware experts with experience building the Xbox 360 controller, Kinect, Courier, and Zune. The duo have been working on Paper and Pencil since FiftyThree was founded a couple years ago. In fact, Paper was always supposed to have a stylus to complement it, they say, but not just any stylus.

"Styli today mimic pens, and there’s a formality and permanence to pens," says Harris. "A pencil on other hand is very informal, and tends to be because it has an eraser, and [thus] tends to be less permanent. We want to make sure we represent this idea of freedom of creation." And for FiftyThree, freedom isn’t something to be taken for granted: dozens of drawing apps exist, but perhaps only Paper makes your casual drawings look good. "In developing [the Expressive Ink Engine] for Paper, the metaphor was Guitar Hero," says Harris. "How do we make it so inks are [intuitive] to use but come out great?"

FiftyThree engineers had their work cut out for them when Paper needed a zoom-in loupe for power users, but not necessarily when Pencil needed a responsive, precise tip. Petschnigg, Ikeda, Harris, and company once had the full power of Microsoft behind them, but at FiftyThree, they had to source their own suppliers in Asia, design their own aluminum extrusion methods, and plan the seven-step method where parts from around the world were assembled in one place. In other words, FiftyThree is yet another software startup gently pushing into the hardware space with myriad challenges to overcome. "Is there one stylus tip to rule them all? It’s something we talk about quite a bit," says Harris. "The answer is no. In the analog world, there are a lot of different pen and tip types for different needs, so we looked at designing a tip that fulfills a larger array of those needs."

The tip is, after all, the most important part of the stylus. You don’t want a tip that’s too mushy, or too firm, or that won’t effortlessly slide across glass. Pencil errs on the mushy side, a little like FiftyThree’s previous stylus recommendation, the $20 Wacom Bamboo. Mushy tips tend to be more responsive, and Pencil is no exception. Even the lightest touches register in Paper, an achievement not all styluses on the market can match. But how does Pencil compare to the best styluses, both Bluetooth and passive? 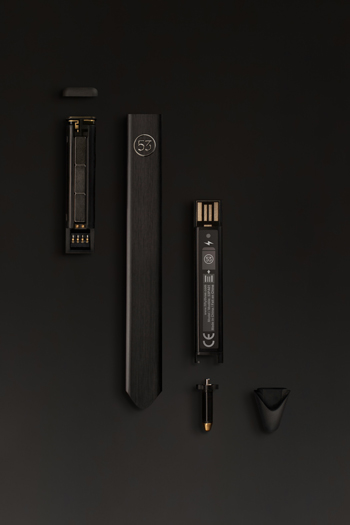 Unlike other Bluetooth styluses, Pencil doesn’t account for different degrees of pressure to achieve different line weights, but that is a problem Petschnigg thinks he has already solved. Paper lets you vary your line weight by drawing at different speeds, not by pressing down harder on-screen. Otherwise, it feels far more accessible than its competitors, bearing no buttons, and most importantly, having the heft of a regular, passive stylus. And on a purely aesthetic basis, Pencil is beautiful. It feels like a well-balanced carpenter’s pencil, with two large flat sides so it can’t roll off your table. Even Pencil’s cylindrical packaging tube is designed to always roll "upright."

"How do we make it so inks are [intuitive] to use but come out great?"

Pencil inhabits an interesting space between "pro" and "consumer." At $50, it’s nearly half the price of the Jot Touch, and $30 less than the Pogo Connect. It’s more expensive than any of its passive competitors like the Bamboo or Maglus, but it's also of a higher quality. I can’t help but feel like it’s a great value for what you’re getting. Its eraser effectively lowers the barrier of entry to nil for people unfamiliar with styluses, since in many ways, it was designed to act like a real pencil. The device’s compatibility with Paper is also a standout feature, and will be expanded over the coming months, the company says. How? Petschnigg offers a hint — Pencil’s v-shaped tip, which could ostensibly be used for new kinds of digital shading. The total package is an attractive one for casual users and pros alike.

"The biggest breakthroughs in computing happen when hardware and software come together," says Ikeda as he raises his arms in the air. "Adobe’s PDF came from their printing business, and Microsoft developed its first mouse for Windows," he says. And of course, Ikeda’s motion-sensing Kinect has been nothing short of a breakthrough as a means to interact with software. FiftyThree’s pencil isn’t going to revolutionize interaction the way these products did, but it’s a first step in the right direction.