Anyone who wants to print out their photographs has no shortage of options, from spending a few cents at the corner drugstore to building a glossy book using Apple's iPhoto software. Now Yahoo is entering the market with a service that it says is the easiest to use yet: Flickr Photo Books, which can be generated automatically with a single click on the thumbnail for any photo set. "There are plenty of people doing it, but we try to take a different approach," says Tom Hughes, who runs monetization efforts at Flickr. Surveys of Flickr users showed that they wanted an easier way to create photo books, Hughes says — oftentimes they would start building one using another service and abandon it before finishing.

"We try to take a different approach."

Starting today, hovering over a photo set on the web version of Flickr will cause a book icon to pop up; click it, and you enter the Photo Book workflow. The first image in your set becomes the cover photo by default, and you can rearrange pages by dragging and dropping. Flickr will crop and center your photos using its own algorithms, and you can adjust its selections if you'd prefer a different cropping. 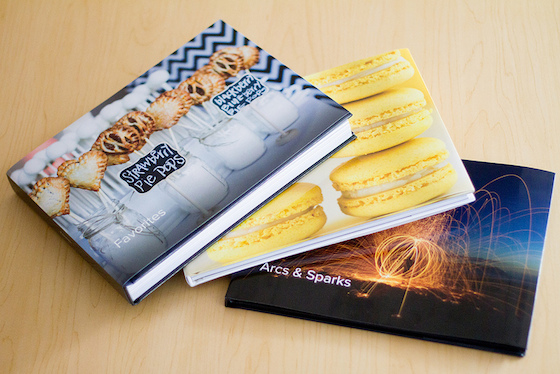 Flickr's 11-by-8.5-inch volumes print full-bleed images on glossy paper, and automatically select a color for the back cover using a tone from the lead image. The books start at $34.95 for a 20-page book and can grow as large as 240 pages, with each additional page costing 50 cents. (Apple's photo books start at $29.99 but cost 99 cents for each additional page.) Books will arrive in five to seven days after ordering; for now, shipping is available only in the United States.

Since it started giving everyone 1 terabyte of free storage, Yahoo says daily Flickr uploads have increased up to seven times. And while storage is cheaper than ever, Flickr still has to find ways to pay for it. Photo Books are hardly an original idea, but Yahoo's implementation is slick — and anyone who has abandoned a photo printing project elsewhere may want to consider looking at how Flickr does it.