Back at SXSW, Google announced the Glass Mirror API — the first step in allowing developers to build apps, or "Glassware" for its wearable computing device. Now, developers will have a whole new set of tools at their disposal: the long-awaited Glass Development Kit (GDK). At a Glass hackathon today in Google’s San Francisco offices today, the company's senior development advocate Timothy Jordan finally took the wraps off Google’s new tool to let developers build Glassware that matches the feature set of the company’s own apps.

Jordan highlighted a few key ways that the GDK differs from Mirror. Apps can run in offline mode, they can get "real-time user response" without having to ping the cloud, and GDK apps can access the Glass hardware directly — which means new apps can take full advantage of the built-in GPS and gyroscope, for example. Android developers should feel right at home in the GDK — Jordan stressed that Google "worked really hard to make sure that if you’re an Android developer, developing for Glass would feel natural."

Perhaps the two biggest user-facing innovations that the GDK will allow are "live cards" and a focused, immersive experience. If you’ve used Glass, you’re familiar with the "timeline" paradigm — time-ordered cards from your interactions with Glass stack up to the right of the home screen. Now, live cards will let Glassware live to the left of the home screen and continually update as long as it's running. A simple example of that would be a stopwatch, continually ticking off time and updating live, that you could easily access with one swipe.

The immersive experience is on the other side of things — it’s meant to be used to complete a focused, specific task. The rest of the timeline "fades away" while you’re in an immersive app, and the swiping gestures that typically move you through your Glass timeline instead control specific features within the app itself.

The best way to understand these new Glass features is by seeing them in action, and Google announced five new Glassware apps built with the GDK. Perhaps the coolest and seemingly most useful new Glassware was called Word Lens — it’s an app that taps into the Glass camera and translates text. Just pick what you need to translate (Spanish to English, for example), look at the text, and Glass will translate it for you. It even overlays the translation right where you’re looking. 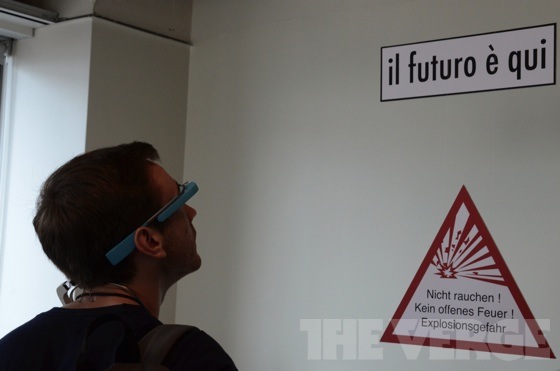 Another immersive experience can be found with a simple word-scramble game called Spellista. Built by Glu, Spellista’s the first game built natively for Glass and uses the gyroscope and accelerometer to track your head movements — looking at the different letters lets you spell out a word. The game also lets you build your own custom levels; you can speak words to add to the puzzle and use a picture taken from Glass as the background for the level.

The new Strava for Glass app is a good example of using the new "live card" view — already an app for iOS and Android, the new Glassware lets you view details of your jog or bike ride, always available just to the left of the Glass home screen. It tracks distance and MPH, uploads to your account, and notifies you of predefined "segments" — a particularly challenging section of your ride that you want to track and see if you can improve on, for example.

Other demos included a Glass-enabled version of cooking and recipe app All The Cooks, which lets you use voice activation to search for recipes and swipe through the different steps — it’s a smart implementation that could keep users from having to go back to cookbooks or iPads in the middle of the cooking process. There’s also an app called GolfSight that users the Glass GPS to find nearby courses — from there you can select a course you’re playing on, track your score, and get info on course hazards.

None of these apps are essential, but they help to illustrate where Glass can go

While none of these apps are the kind of essential, everyday use tools that fully make the case for Glass, they are good examples of the "slice of life" mentality Google is pushing for Glass. It’s about finding small ways to make accessing information that's important to you easier, and then getting out of your way when you don’t want to deal with them. And this is just the first round of apps using the GDK — throughout the rest of the hackathon, Glass developers will get a chance to try the new development kit for themselves and bounce ideas off the rest of the community.

If you’re not in San Francisco and want to try the GDK for yourself, Google says a "sneak peak" version will be available today — the company wants users to start finding bugs, building apps, and thinking about what else they need from it. A full developer preview will be released in the coming months, and an official release will follow sometime further down the line. It’s an important step for Glass — it’s still something of a blank slate, but now developers will have many more tools at their disposal to make the product more attractive to potential buyers when it finally launches.

A
Andrew WebsterTwo hours ago
Looking for something to do this weekend?

PodcastsSee more Podcasts
Podcasts
See all Podcasts
A
Andrew J. HawkinsSep 23
Ford is running out of its own Blue Oval badges.

Need to fill your video game, VR world, or project render with 3D chaff? Nvidia’s latest AI model could help. Trained on 2D images, it can churn out customizable 3D objects ready to import and tweak.

The model seems rudimentary (the renders aren’t amazing quality and seem limited in their variety), but generative AI models like this are only going to improve, speeding up work for all sorts of creative types.

Elon Musk has an actual free speech issue on his hands

Netflix is on a good run with anime lately

This week Friday brings the debut of Apple’s other new hardware. We’ve reviewed both the new AirPods Pro and this chonky Apple Watch Ultra, and now you’ll decide if you’re picking them up, or not.

How to use the Apple Watch Ultra’s Action button