First iPhone game controllers take iOS back to the future

First iPhone game controllers take iOS back to the future

iOS 7 isn't just a fresh lick of flat paint for the iPhone. One of the significant changes Apple made under the hood of its latest mobile operating system was to open it up to third-party gaming accessories. In a mobile gaming world populated by the likes of the PS Vita, the Nintendo 3DS, and most recently the Android-powered Nvidia Shield, Apple's reluctance to embrace hardware game controllers has kept it from conquering an even larger share of the market.

This week, a pair of the first Made for iPhone controllers are making their debuts, one from Logitech, dubbed the PowerShell, and the other from PowerA, called the Moga Ace Power. The two operate very similarly in wrapping around your device — fifth-generation iPod touches are supported as well as the iPhone — and providing analog controls for games that choose to support off-screen input. The "power" in the two controllers' names signposts the integrated batteries, 1500mAh on the Logitech and 1800mAh on the Moga unit, which will come in handy during extended gaming sessions. The similarities don't end there. Pricing is the same, with the PowerShell available now for $99.99 and the Ace Power costing $100, however you might be well advised to give this first generation of third-party accessories a skip. 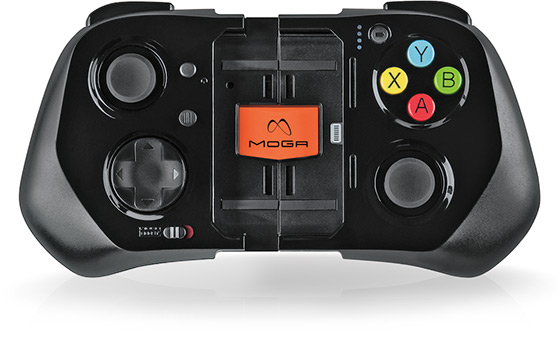 Polygon's Russ Frushtick has gotten to grips with the Moga Ace Power already and his impressions are a mix of woe and disappointment. Despite the high sticker price, the controller felt poorly built and really didn't live up to the hopes and expectations such an accessory inevitably excites. With imperfect responsiveness and ergonomics that are a far cry from the refinement of the new PS4 controller, it's evident that iPhone gamepads still have a long way to go. But at least the journey has begun, and Frushtick's analysis ends on the note that having a controller, even a shoddy one, is better than not.