US lagging in life expectancy despite spending most on health

US lagging in life expectancy despite spending most on health

The US spends significantly more per person on health care than others, but has lower life expectancy rates than its peers. That's the message from the Organisation for Economic Co-operation and Development's (OECD) Health at a Glance 2013 report, which highlights the state of health in its 34 member countries. The report runs hundreds of pages long, detailing the most recent data in key areas of health and countries' health systems. One section looks into life expectancy gains over the past few decades, and, for many Americans, it makes for a worrying read. 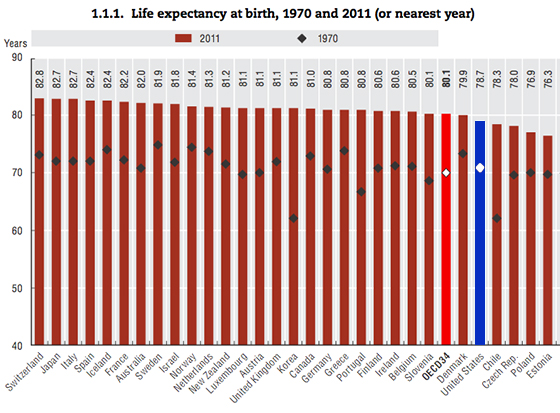 Chart has been modified to highlight US, no data has been changed, but some countries are omitted.

According to the OECD's data, the United States is severely lagging in life expectancy gains, falling further behind the OECD average than in previous years. The overall movement over the past 41 years has obviously been positive — the average American life expectancy has increased by almost 8 years from 70.9 to 78.7 — but that increase is significantly slower than many other nations. The average increase over the period was 10.1 years, from 70 to 80.1 years, meaning the US has, in four decades, gone from a year ahead of the curve to more than a year behind. The average has been significantly affected by comparatively rapid health improvements in countries like Greece, Portugal, and Korea, but the US nonetheless lags behind.

Another chart, pictured at the top of this article, shows a worrying statistic. The US spends the most on health, $8,508 per person, with few rewards. Most countries sit somewhere close to the curve; the next-highest spender is Norway at $5,699 per person, which has an average life expectancy of 81.4 years. Despite the sobering figures, the US on average feels healthier than any other OECD member: 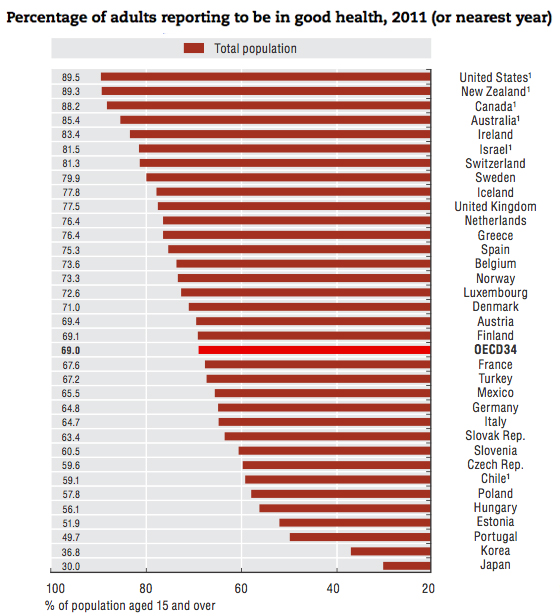 The OECD notes data is skewed in favor of English-speaking nations due to the nature of the question asked.

The OECD suggests a few explanations for the lower gains. First, it highlights "the highly fragmented nature of the US health system, with relatively few resources devoted to public health and primary care, and a large share of the population uninsured." Second, it notes the US has a higher calorie consumption per capita and obesity rates, higher consumption of prescription and illegal drugs, higher deaths from road traffic accidents, and higher homicide rates than many nations. Finally, it suggests socio-economic conditions — in particular a more prominent rich-poor divide than other countries — could be to blame.