Sony was in the smartwatch vanguard, but watches, as we all know, are a niche item when compared to at least one common accessory: hair. Eager to push into this new frontier, the company is attempting to patent an item it calls the "SmartWig," a full wig or toupee that would connect to a smartphone or other device and let users do something as basic as receive an email notification or as complex as ask a friend for directions, send picture or video footage to them for reference, and then receive subtle vibrational feedback that would tell them where to go. Here is a list of things that could be in the SmartWig:

Sony has a fairly expansive idea of what a SmartWig would do, but one of its more interesting ideas is that the wig could detect facial expressions and translate them into computing commands — although the example it gives is someone raising their eyebrows to flip through a slideshow. Even that humble task could apparently be improved by adding pushable sideburn control units and an embedded laser so the user could point with their head.  With more sensors, the SmartWig could be a comprehensive health monitor that checks brain waves, temperature, blood pressure, and sweat levels. It even suggests different monikers based on abilities, such as a "navigation wig." 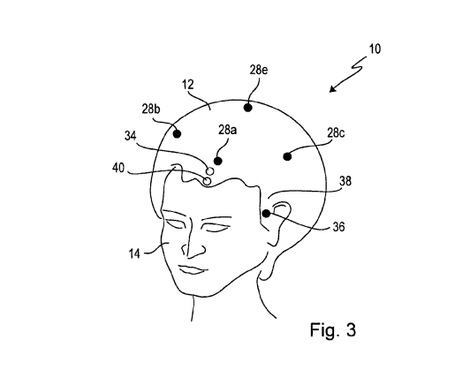 A lot of the patent application, though, is just Sony selling everybody on the benefits of wigs. Taking a page from Strange Days, it argues that "the user can wear the wearable computing device as a regular wig while looking natural at the same time. ... Wigs are useful to enhance a user's appearance and change other's impressions because different hairstyles give different impressions. Thus, many people use wigs." Cited examples include bald people, actors, and cosplayers. It even suggests incorporating "artificial muscles" that read and adapt to facial expressions and are useful for false mustaches: "If a user is excited, the hair dynamically changes." A wig, it says, is a safer option than other wearables because "the head has little [opportunity] to touch objects and people instinctively protect their head." It may sound far-fetched, but really, is a vibrating, laser-equipped dynamic mustache that much sillier than talking into your smartwatch?