Xbox One teardown reveals why Microsoft's console is so big

Share All sharing options for: Xbox One teardown reveals why Microsoft's console is so big

The Xbox One is nearly here, and the team at iFixit have already gotten their hands on one and have completed their deconstruction to reveal everything that's inside of it. It should be no surprise that the Xbox's inside looks a little bit like a PC: a big green motherboard, a Blu-ray drive housed in gray metal, and even a standard 2.5-inch SATA II hard drive — which theoretically makes it replaceable, though you'd certainly be voiding your warranty in the process.

A huge fan, standard hard drive, and a Blu-ray drive take up a ton of space

If you're curious as to why the Xbox One is so much bigger than the PlayStation 4 when both machines are using the same processor, the first place to look is its fan. While the PlayStation's fan doesn't appear particularly big at 85 millimeters in diameter, the Xbox's is huge by comparison at 112 millimeters, taking up a good quarter of what's inside the console when looking from the top down. iFixit notes it is easily separated from the heat sink, making it relatively easy to replace. 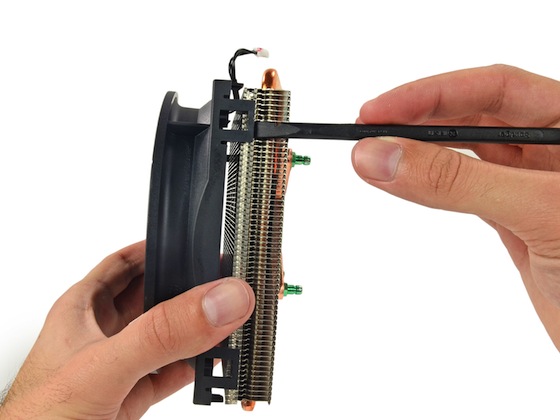 Image of the Xbox One's fan and heat sink. (iFixit)

As iFixit points out, Microsoft likely doesn't want to see a repeat of the troubles it had with the Xbox 360, which was notorious for breaking down because of heat issues. That could be part of the reason too that the Xbox One doesn't have an internal power supply too — though the omission is all the more curious when looking at the PS4's small build, which includes one built-in.

Another big size differentiator between the consoles is their Blu-ray drives. While Sony uses a thin, stripped-down drive, Microsoft threw one in that appears to still be clad in its standard, thick casing for a PC. 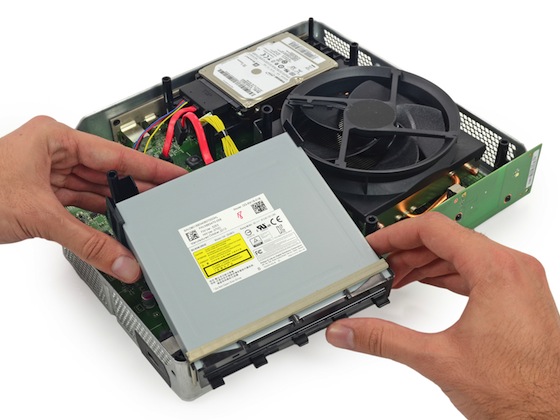 iFixit's crack disassembly team found the Xbox One quite repairable, giving it an 8 out of 10 for ease, the exact same numerical score they gave to the new PlayStation 4. But Sony actually beat iFixit to the punch in terms of showing of its console innards, providing its own teardown of the machine before it was even released. As for the Xbox One, Microsoft has not provided a similar teardown yet, meaning iFixit's view of the guts will be the final opportunity most gamers have to evaluate the machine before it launches on Friday.