App.net crawls out from Twitter's shadow with Broadcast: notifications for anything

With one app, you can now subscribe to alerts about news, podcasts, sports, or any RSS feed

Share All sharing options for: App.net crawls out from Twitter's shadow with Broadcast: notifications for anything

App.net CEO Dalton Caldwell once promised a better Twitter — "a real time social feed without the ads" that wouldn’t crush the dreams of its developer community. A little over a year later, App.net has accumulated 200,000 users and a vibrant community of developers building great apps, but it’s unclear how many are actively using App.net for its original purpose. Caldwell claims he never intended to build a Twitter clone after all — that was just part of the marketing. He built a platform for social apps which included support for push notifications, messages, feeds, and profiles, but none of it'd really stuck. Caldwell decided that something needed to change.

"What I’ve been wracking my brain on is what we need for this company to reach its full potential — to have a really crisp value proposition for normals," says Caldwell. He arrived at Broadcast, which launches today on iOS and Android. Broadcast is a universal push-notification service that alerts you when things you care about happen on the internet. The service lets you sign up to receive alerts when The Vergecast is live, for example, or when Kim Kardashian posts to Instagram, or when your site goes down.

In Caldwell’s perfect world, Broadcast will also plug into the internet of things to let you know when nearly anything happens, whether it be an an important tweet or your front door. "You should be able to get a push for anything that happens on the internet," says Caldwell, "and for some stuff, push feels a lot better and more compelling." Each alert can include a link, a photo, a GIF, and a paragraph of text. All your notifications are collected inside the App.net app, which acts as a feed of all your notifications and channels. The "Broadcast" tab is the place to flip through your recent alerts, a "Channels" tab lets you search for Channels to follow, and an "Apps" tab, oddly, lets you find apps to use with other App.net services.

"You should be able to get a push for anything that happens on the internet."

Broadcast is an admittedly nerdy idea, but Caldwell hopes he can prove to mainstream users that notification overload needn’t be so out of their control. Inside the new App.net app, users can subscribe to the push "Channels" others have created, like the 300 that App.net offers right out of the gate, or opt to create their own using an RSS feed or with App.net’s API. The early focus in App.net’s first-party channels is on publishers, including The New Yorker and Time. The funny part about Broadcast, however, is that even if these channels didn’t exist, you could pretty quickly create them by hooking up each site’s RSS feed to a new channel. The idea is that a directory of hundreds or thousands of channels will evolve that people to subscribe to — one channel just for the New York Times’ movie reviews, and another for every time MKBHD uploads a new YouTube video. 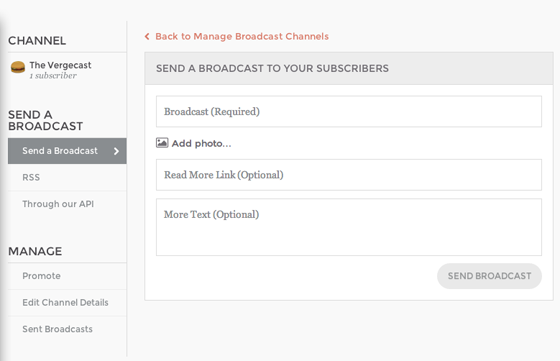 Twitter already includes an option to receive push notifications whenever someone tweets, but Broadcast is more modular. Nobody is going to bother creating and maintaining a Twitter account for each subsection of their site, and Broadcast makes doing so a lot more accessible. Caldwell’s current Broadcast implementation isn’t as simple as clicking a Follow on a Twitter account, or as easy as creating a recipe on IFTTT, but he hopes that it someday will be. The web is a labyrinth of APIs, feeds, and apps, after all, and people need a quick way to subscribe to the articles written by their favorite writer.

You could use RSS to subscribe to less often updated websites and feeds, of course, but then you have to check in. Broadcast, on the other hand, comes to you. "Old-school RSS readers are what nerds would’ve used, but from a consumer-friendly perspective, the idea of getting a push when your favorite internet comic gets updated is really awesome," says Caldwell. Perhaps more importantly, the idea is built for mobile devices.

"There’s no question about who will see [these updates], or if it will get lost in their feed."

What some users might find most useful is that they can for the first time hook up a way to send push notifications to their friends. You could create a channel to push messages about upcoming fraternity events, or to instantly alert your team members that a meeting’s off, or to warn community members about severe weather. You can even push alerts right from the mobile app itself. App.net doesn’t offer private channels that won’t appear in its search quite yet, but Caldwell says they’re coming.

"There’s no question about who will see [these updates], or if it will get lost in their feed. it’s a different medium," Caldwell says. He calls out Facebook and Twitter, specifically, saying that on Facebook, you might only see 12 percent of the posts on a page you follow; on Twitter, conversely, you can either get alerts for every tweet by a specific user, or for no tweets at all. Twitter was heralded as an RSS killer, but hasn’t necessarily filled that role, since it focuses mostly on what’s happening now instead of making sure you don’t miss a post.

To Caldwell, Broadcast isn’t a revolutionary idea, but it’s a revolutionary implementation. "RSS already existed, but Twitter made [following a blog] as simple as clicking a follow button," he says. Broadcast hopes to take this idea one step further, letting you sign up to follow just about anything with a feed, regardless of what site it’s on. There aren’t many consumer analogs to Broadcast in the industry today aside from apps like Push.co, which let news sites push out updates; Twitter, which lets you sign up for notifications every time someone tweets; and Boxcar, which introduced the world to customizable push notifications in 2010, but hasn’t been updated in two years. But in most apps today, push notifications are a feature, and not the app itself. Pushover is one exception, and perhaps Broadcast’ closest competitor — a service targeting developers and IFTTT users, but without the appealing consumer angle and attractive use cases.

App.net’s first product targeted a small swath of developers who longed for an ad-free social network. With its second coming, App.net has its eyes set on a much larger group: millions of people looking for ways to stay up to date on things they care about. These people have thus far been trained to turn on push notifications for Twitter, and Facebook, and for the ESPN app, in the process subjecting themselves to a fragmented set of app-by-app settings for their push alerts. Broadcast, on the other hand, provides one place for all your push alerts and their respective settings. If Caldwell can prove that push is indeed a product consumers want, he may have finally found a use for the infrastructure he’s built.