Creating analog with digital: the beautiful black-and-white cinematography of ‘Nebraska’

Creating analog with digital: the beautiful black-and-white cinematography of ‘Nebraska’

How cinematographer Phedon Papamichael made magic with a digital camera

Alexander Payne’s new film Nebraska is about a fading older man (Bruce Dern, hitting a new high in a career full of them) who embarks on a road trip with his son to redeem a sweepstakes prize he’s sure will earn him a fortune. It’s a raw and funny look at family and the relationships we forge, and it’s made all the more resonant by the breathtaking black-and-white cinematography of Phedon Papamichael.

When discussing small character studies, the natural inclination is to think of the low-budget indie gems that shoot on film to bring their worlds to life. But despite Nebraska’s aesthetic sensibilities, the filmmakers actually went the opposite way, creating a filmic, black-and-white beauty with digital cameras.

The film always existed as a black-and-white project in Payne’s head, going back to when the two discussed it on the set of Sideways. “I, of course, was like, ‘This is great! Why wouldn’t we do a black-and-white movie if we can?’” he says. “Especially today, in the studio system, if they’ll let us it’s gonna be great.”

Shooting on black-and-white film stock was out

Although initially reluctant, Paramount did agree to Payne’s idea of releasing the movie in black and white — with one caveat. Some markets and outlets would be given a color version, which meant that shooting on black-and-white negative was out. To settle on the right workflow, Papamichael tested three different options: Kodak Double-X 5222 black-and-white film stock, color film — which would then have color removed in post-production — and the Arri Alexa digital camera.

“We put the black and white through the DI [digital intermediate coloring] process, and I adjusted the contrast where I liked it, and looked at the film grain,” Papamichael says. “And then I said, ‘Okay, match all the other formats to that.’” If shooting on black and white wasn’t going to be possible, recreating the look would be the goal. 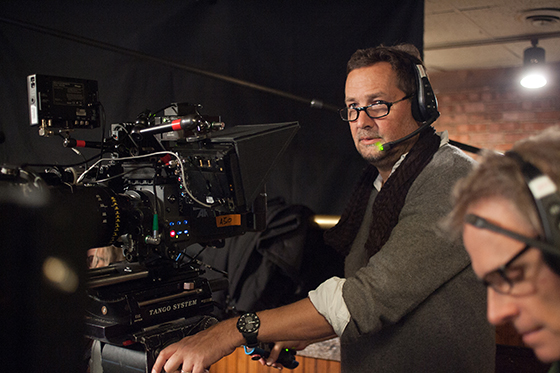 Phedon Papamichael on the set of Nebraska.

Papamichael was familiar with the Alexa, having previously shot Judd Apatow’s This Is 40 on the camera. The ability to shoot long takes without having to deal with the time constraints of film magazines proved particularly useful for Apatow, who likes to keep the camera rolling while actors try different approaches in a given scene. It won out for Nebraska as well, but the cinematographer paired the camera with a set of anamorphic Panavision lenses that had originally been assembled in the 1970s. However, one more element was needed to complete the look.

"We actually shoot film grain. It's not something you achieve electronically."

Film grain as we traditionally think of it is an artifact of the photochemical process, and simply doesn’t exist with digital cameras — but in Nebraska it’s an essential characteristic of the imagery. Using his black-and-white film tests as reference, Papamichael sought out a matching texture. “We actually shoot film grain,” he says. “It’s not something you achieve electronically through some kind of software.” It’s then added atop the Alexa footage as an additional layer. “It feels very organic, and it also covers up some of the digital artifacts,” he explains. “And that in combination with these older lenses that don’t resolve as sharply, and have some fall-off on the edges, you really get this film feel for it.”

To make sure the final result was on track, Papamichael and Payne had Paramount send over a print of Peter Bogdanovich’s Paper Moon. “We put it up, A / B projection, and sort of compared the grain. It’s very similar,” he says. “Of course it’s cleaner, because film projection always has additional flaws which gives it some sort of more organic, live quality on screen. … But if you projected Paper Moon as a DCP [the format in which movies are shown digitally] I think it’d be very, very close.” 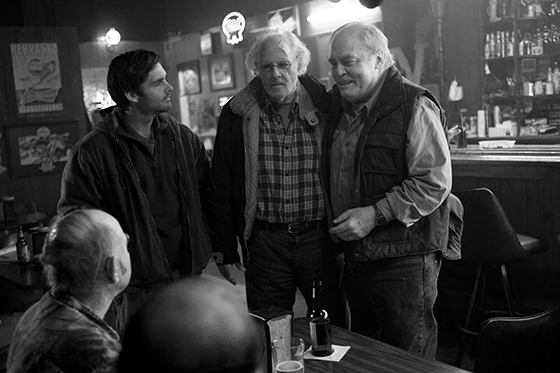 Papamichael is quick to point out that digital cameras aren’t only worthwhile when they’re used to emulate the look of film, though he says there is a tendency amongst some cinematographers to hold on to the rapidly vanishing medium. “We have the 48 frames thing going on with [Peter] Jackson, and then we’ve got obviously 3D, and then the camera and the projectors are going 4K, 6K, 8K,” he says. “Where is it going to end?” As cameras and lenses get sharper, the question can often become how to reduce the fidelity of the image so it lines up with where film has been, rather than where new technology is taking it. “It feels like we should get a little more in sync on that.”

“But of course, different people like different things, and there’s lots of argument to be made,” he acknowledges. “And the reality is the new generations, they’re already not used to seeing anyone on film. I have six-year-old twins, and they are just accustomed to seeing in this way. So when they actually see film they probably will say, ‘Well, why does it look so weird?’”

For Nebraska, however, it was a matter not of technology, but of artistic vision — and finding the right tools to realize it. “They had a special screening in Omaha, and [Alexander’s] mom, who’s 90, saw it,” Papamichael says. “And she goes, ‘Oh now I know why you wanted to do it in black and white all the time. It wouldn’t have been good in color!’”

Nebraska is now playing. For more imagery from — and inspired by — the film, visit the Nebraska Photo Project.