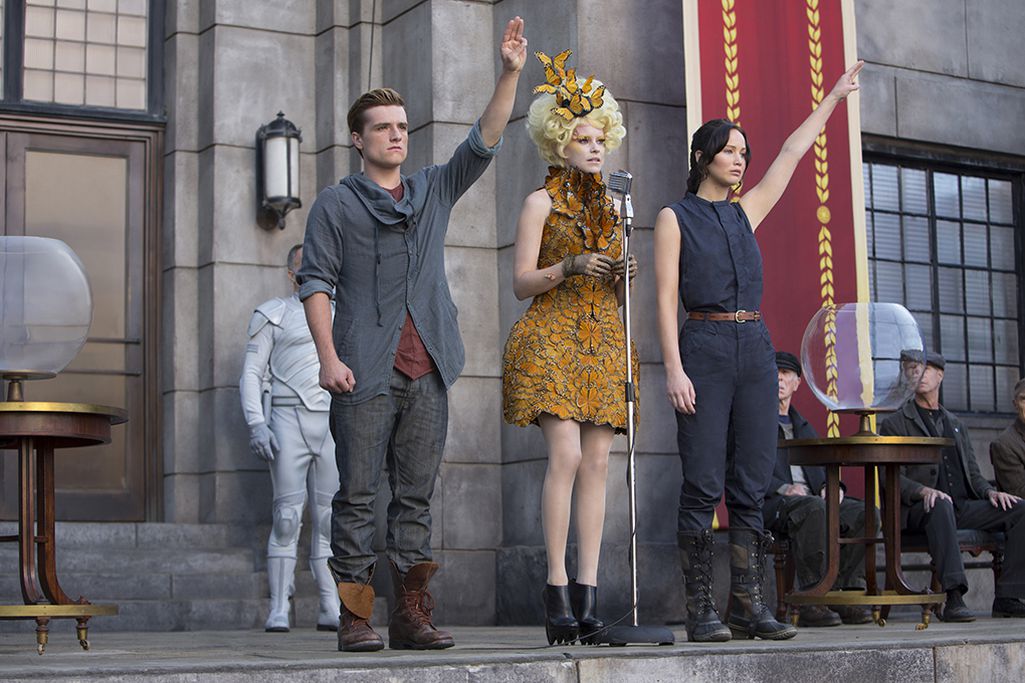 As I was watching a pre-roll ad for Subway’s Catching Fire-branded Fiery Footlong Collection I remembered why I’d been nervously anticipating the film adaptation of Suzanne Collins’ novel since I first read it almost three years ago. The Hunger Games trilogy focuses on a dystopian land called Panem, where every year 24 adolescents are plucked from the population to take place in a televised death match called, yes, The Hunger Games. Katniss Everdeen (Jennifer Lawrence) is one of the group, and over the course of the battle finds herself (maybe) falling in love with fellow combatant Peeta, played by Josh Hutcherson.

The sequel Catching Fire was by far my favorite book of the trilogy, and I had a lot at stake in its transition to the big screen: the first film just barely met my (high) expectations and I had seen my childhood favorite Ender’s Game ruined by filmic techno-gimmickry just a few weeks earlier. Mercifully, Catching Fire screenwriters Simon Beaufoy and Michael Arndt took their jobs as seriously as Mockingjay-adorned Katniss enthusiasts like myself wished they would. 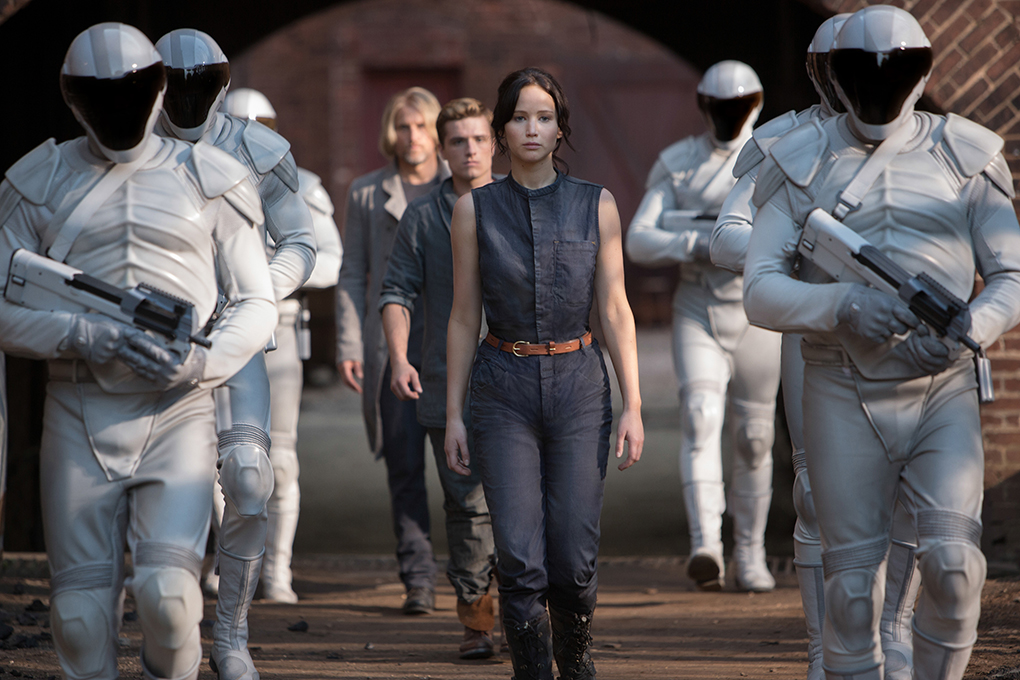 It keeps ethics and emotion at the center of the film

The story of Panem is compelling because it addresses perennial questions of war and power through the distinctly modern lens of media hypersaturation. It’s been difficult to do much of anything the past few weeks without seeing Jennifer Lawrence’s face, whether she’s on the cover of InStyle, snuggling with David Letterman, or hawking Sriracha-laced Footlongs on Hulu. While this full-on media blitz complicates the process of digesting some of the film’s core ideals, it’s the sort of compromise necessary to justify a $140 million budget to the investors that made the film possible. Once the lights go down, an immensely talented cast and crew keep ethics and emotions at the center of the film — something you can’t say for the average Michael Bay joint.

While they haven’t developed as strikingly as the Harry Potter kids did between their first and second movies, Lawrence and Hutcherson have evolved into actors worthy of sharing scenes with Stanley Tucci and Donald Sutherland — that wasn’t always true in the first film. Lawrence first showed her capacity to emulate real suffering in 2010 with Winter’s Bone, but it wasn’t until Silver Linings Playbook that we discovered she could be as darkly funny as she was completely devastating. The funniest moment of Catching Fire happens in an uncomfortably long elevator ride where Jenna Malone’s Johanna Mason strips provocatively apropos of nothing. Katniss presses herself against the railing with a gnarly twist of the mouth that radiates internal horror and external disgust — it’s a tiny, perfect snippet of physical comedy, one of many Lawrence uses to illustrate the subtler shades of the heroine’s psyche. 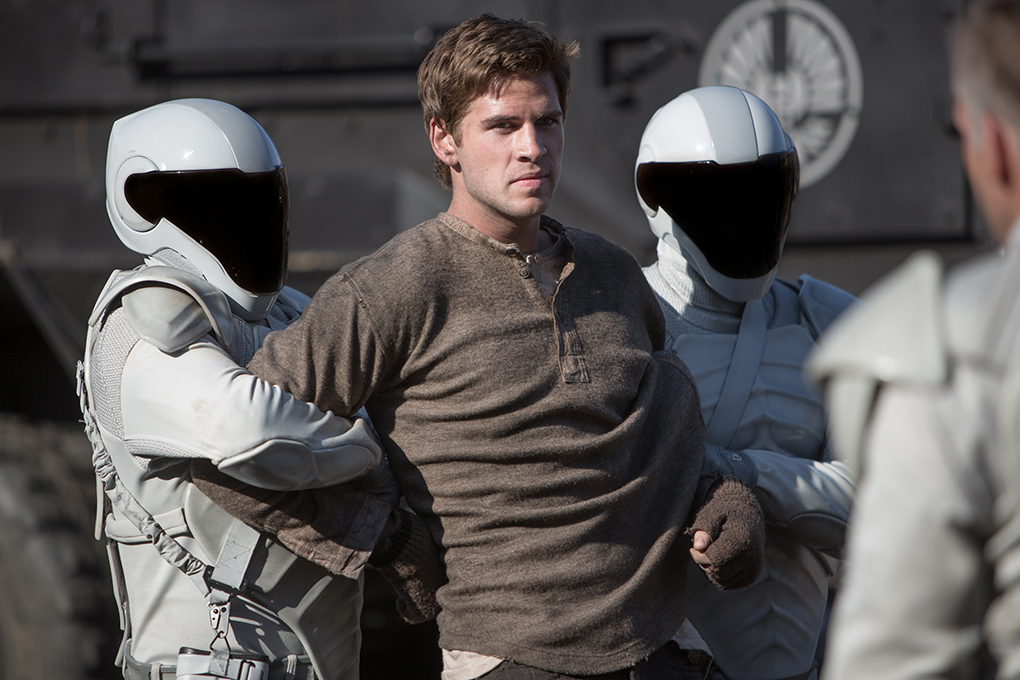 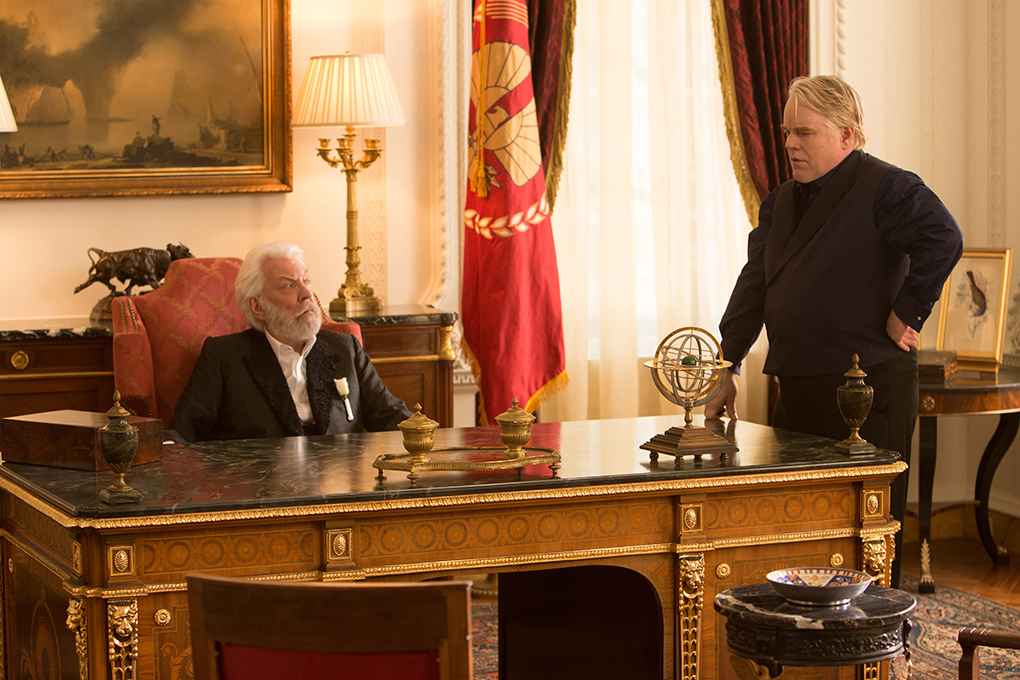 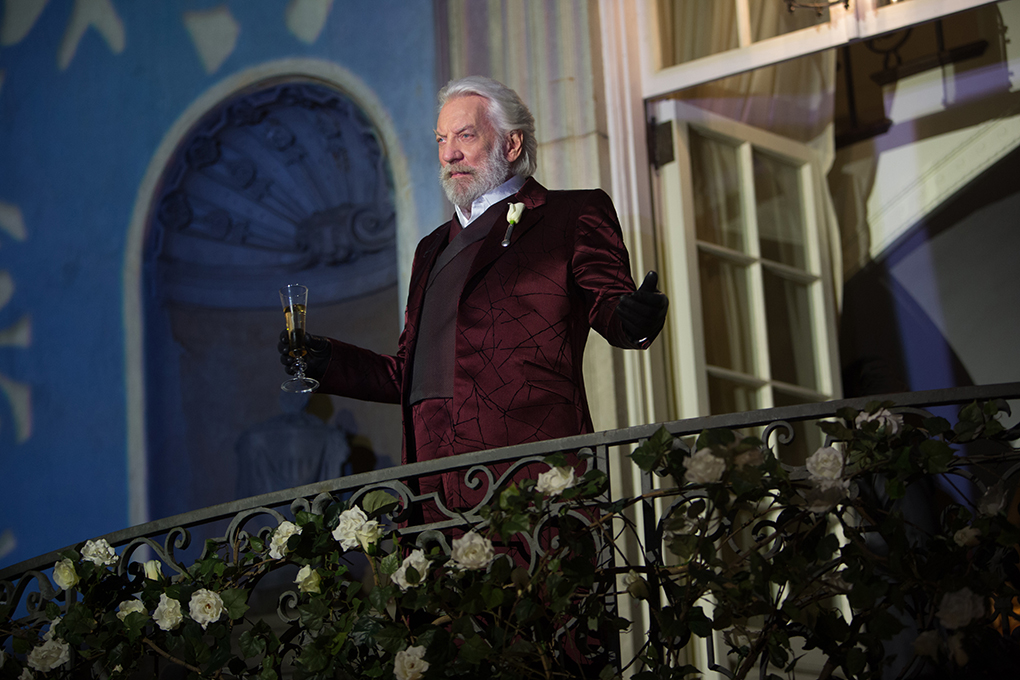 Where the first film and book deal primarily with youth and violence, Catching Fire focuses heavily on the relationship between propaganda and war. After becoming national heroes at the end of The Hunger Games, the District 12 tributes are forced to live public lives that often clash violently with their internal realities. Deception is a requirement for survival, and no character embodies this better than game-maker Plutarch Heavensbee. Philip Seymour Hoffman maneuvers subtly as the undercover revolutionary — it’s hard to picture a less-capable actor effectively pulling off such a layered depiction.

This is Suzanne Collins’ nefarious interpretation of our image-driven society, and it’s a conflict that works even better on screen than it does in the book. This is what sets Catching Fire apart from the mindless entertainment that usually dominates the box office. It’s a far deeper exploration of media and personality than anything you’d ever expect out of the Transformers canon, a rare case when an author’s values are successfully augmented by Hollywood extrapolation.

Of course, no set of values is strong enough to become a pop touchstone on its own merit — to become a household name, Collins also made her universe hugely entertaining. Most of the explosive action in Catching Fire was filmed in Hawaii on IMAX cameras, which sort of makes it feel like a cross between Apocalypse Now and Planet Earth. Katniss climbs a giant tree in a scene that rivals the serene danger of Crouching Tiger, Hidden Dragon, and crystal waves crash in the golden sunlight of the arena’s deadly beaches — the scenery would be engaging in its own right even if people weren’t constantly getting sliced open all over the place. 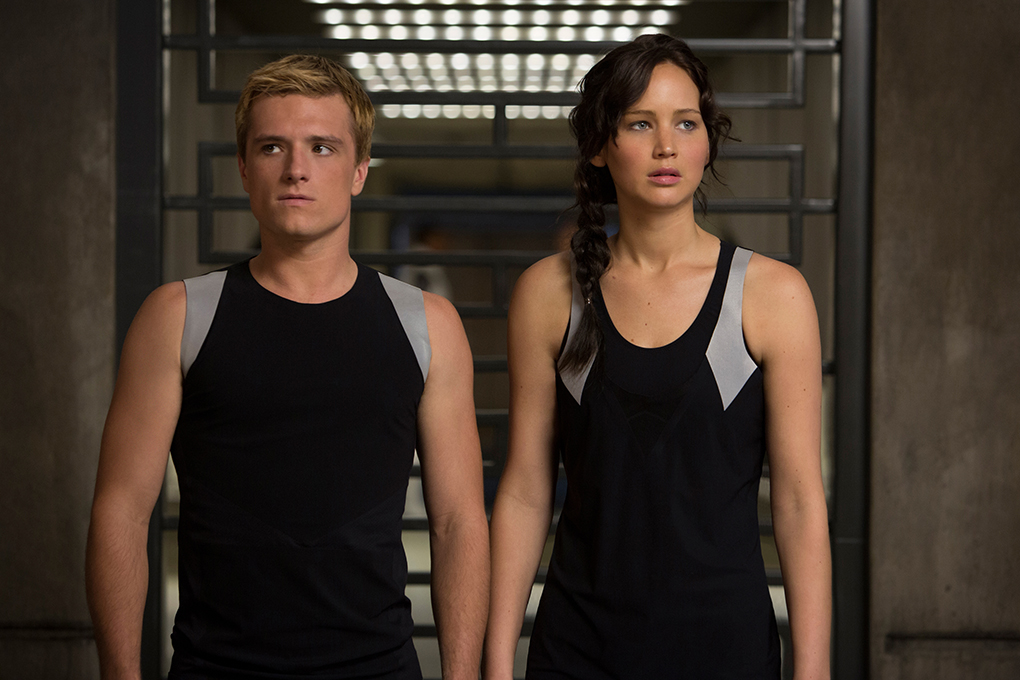 Panem exists in a dystopian future, which makes Catching Fire a work of science fiction by default. Where The Hunger Games film played the CG tech-wizardry card with a heavy hand, Catching Fire lets technology play more of a background role. Because they’re used sparingly, the sci-fi elements here seem more realistic — Katniss uses a simple, floating touchscreen to activate an archery exercise rather than throwing screens around the room like Tom Cruise on the hunt for precrime. Display terminals radiate like fans from simple vases on desks, and chromed-out bullet trains look more like classic cars than spaceships. The design world feels more true to an actual future than an imagined one: it will age treacherously, not cartoonishly. Think THX 1138 instead of Logan’s Run. 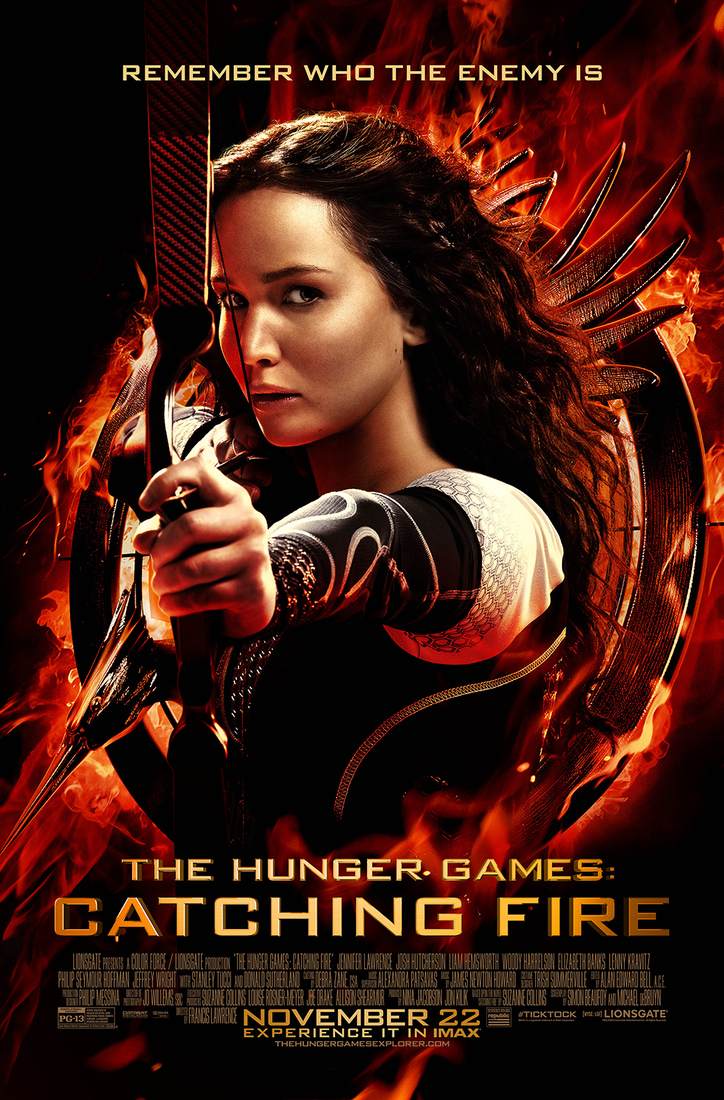 With Catching Fire, it feels like Katniss and company have reached some sort of tipping point. It’s not the Subway tie-in, it’s not the recently introduced Nerf Rebelle line of crossbows marketed to tweenage girls, and it’s not really even the massive fan-art movement that dominates photo-sharing services. What tells me The Hunger Games is a new paradigm of entertainment is the existence of another young-adult trilogy about a dystopian future called Divergent.

If you haven’t seen the books at Target or the ads for the upcoming film adaptation now saturating televisions and movie screens, Divergent is a wholesale ripoff of Suzanne Collins’ franchise in all the most explicit ways. A teenage girl in a dystopian world finds herself at the center of a genocidal government conspiracy — her logo is a flaming circular crest, she fights for nothing more than her pride and her family, and she finds herself in the midst of a harrowing love triangle.

But Tris and Four are no Katniss and Peeta; like a pair of poorly constructed Air Jordan knockoffs, the Divergent universe does nothing more than provide a ho-hum foil to amplify the importance of its inspiration. As long as fully formed products like the Catching Fire movie keep coming, the odds will be in The Hunger Games’ favor to continue being celebrated as the definitive popular moral tale of the early 2000s.