Spec Sheet: comparing the Xbox One, PlayStation 4, and Wii U

Spec Sheet: comparing the Xbox One, PlayStation 4, and Wii U

The new generation of game consoles is finally here in its entirety. Just about every one of the consoles could still use work in one way or another, be it better games, a better interface, or a better build. But even so, it's pretty hard not to want one today. If you had to pick, which console is going to give you the best graphics, the best next-gen experience, and the best improvements in the years to come?

Click above for full specs on all three consoles.

There's a clear odd one out in the console race

While it's not possible to tell much on specs alone, it's clear that one console — yet again — is the odd one out. Nintendo's Wii U is less powerful than the Xbox One and PlayStation 4 in just about every way. It has a slower processor, a less powerful graphics solution, and far fewer media playback options. Like its predecessor, the Wii U is trying to make the story all about a next-gen gaming experience, though it's only just starting to show what that could look like.

The spec question gets a lot more complicated when looking between the Xbox One and the Playstation 4. The two consoles are surprisingly similar on the inside, sporting the same CPU with only a minor speed improvement on the Xbox One, or so it's been rumored. Their graphics chips are also quite similar, but here the PlayStation 4 pulls ahead: though the Xbox's GPU is clocked faster, the PS4's GPU is widely reported to include 50 percent more compute units. Microsoft reportedly won't let games take advantage of every bit of the Xbox's power either — some computing and graphics performance is permanently allotted to other tasks. The PS4 could do something similar, but if it is, details on it haven't come out yet.

That all seems to be giving Sony's console the graphical edge for now. In real world terms, that's mainly boiling down to a matter of resolution: one of the consoles' biggest launch titles, Call of Duty: Ghosts, is running at 1080p on the PS4, but only 720p on the Xbox One. It's likely that this immediate different will diminish as developers get acclimated to Microsoft's new console, but it's a clear sign of which is likely to be the better performer in the long run. The Wii U's graphics, of course, don't look nearly as good as either of its competitors, but it is able to run at 1080p. 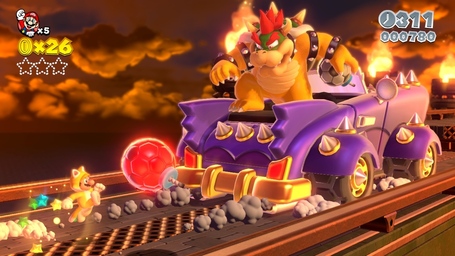 As for how fun those games will be, that could depend on how appealing or inventing you think each consoles' peripheral of choice is. Microsoft is betting big on voice and motion controls, while Sony is angling for a seemingly smaller integration with controller-based motion tracking. Nintendo has a more interesting proposition with its GamePad controller, which includes a built-in touchscreen. But while that may open up a bundle of new opportunities, none have really been enough to fully sell the idea yet.

The other big aspect to this console generation is what they can do when doubling as a media player. The PlayStation 4 picks up right where the PlayStation 3 left off, serving as a perfectly fine streaming box for some of the most popular services, and as a way to play Blu-rays and DVDs. The Wii U has some streaming options too, but unfortunately, you won't be playing back any DVDs or Blu-rays on it — on the bright side, it is the only console with backward compatibility.

The Xbox One, of course, pushes media integration much further. It can match the PS4 in media and streaming playback, but it introduces a completely new element by trying to take over your TV's cable box as well. The integration isn't perfect yet, but the Xbox is the console that's seemingly primed to evolve the most down the road. For those who just want to game, that's not necessarily a big deal, but for those willing to see if a console can really take over their living room, there's no other choice.

It's games against media

Otherwise, making a single console here would boil down to games — which will only keep coming — your controller preference, and maybe the consoles' casing, though there's much better criteria to base a decision on than that. Between the newest two consoles, there seems to be a clear option for those focused gaming and those focused on media. Right now though, neither seems like a particularly bad choice.

We have reviews up for all three consoles (which you can jump to by clicking on their review score in the database box down below), but now that they're all finally in gamers' hands, maybe you'll want to weigh in on what you think about them too. If you've got one, head over to the database to write a review for the Xbox One, the PlayStation 4, or the Wii U.

If you want to learn more about any of the products mentioned above, all of our information on them can be found through the database box located beneath the article. For more on gaming, TVs, and just about every product around, you can check out the full Verge Database right here.