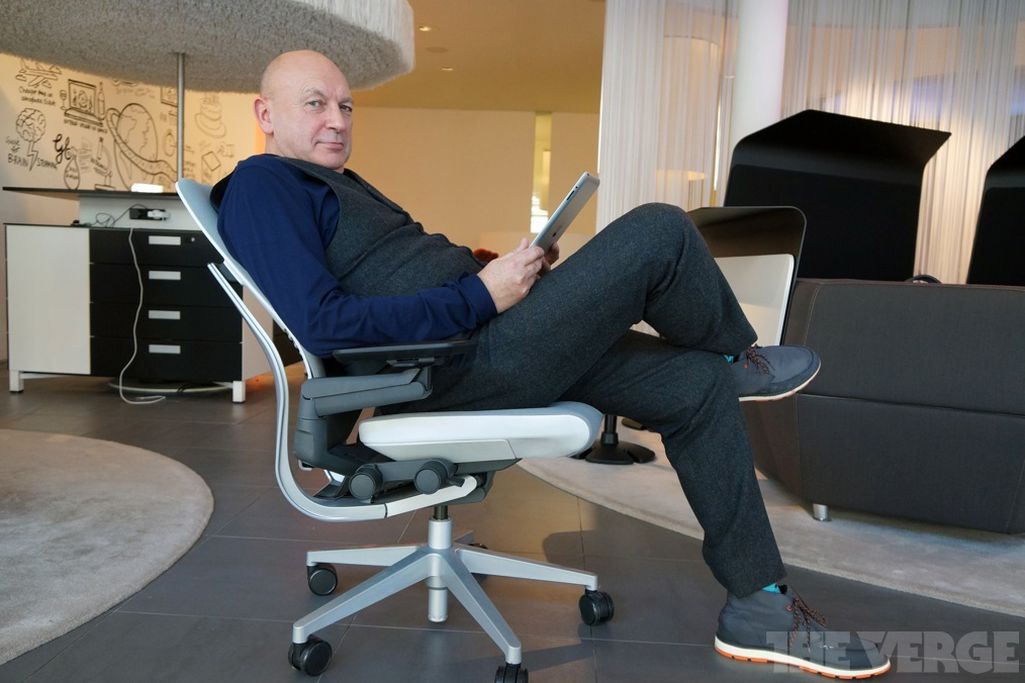 For many people, the Steelcase Leap is the best office chair money can buy. Competitors like Herman Miller, Humanscale, and Knoll may dispute that title, but even they would have to rank the Leap pretty close to the pinnacle of ergonomic seating design.

With such a fine pedigree, any new chair from Steelcase invites equal amounts of anticipation and scrutiny, particularly when it sets itself the ambitious task of serving a whole new generation of mobile technology users. Identifying new ways of sitting that have developed in response to personal tech — and categorizing them with such poetic titles as the strunch and the cocoon — Steelcase believes the very way we interact with chairs and our work environment has changed. Its response to this evolving workspace is the Gesture chair. 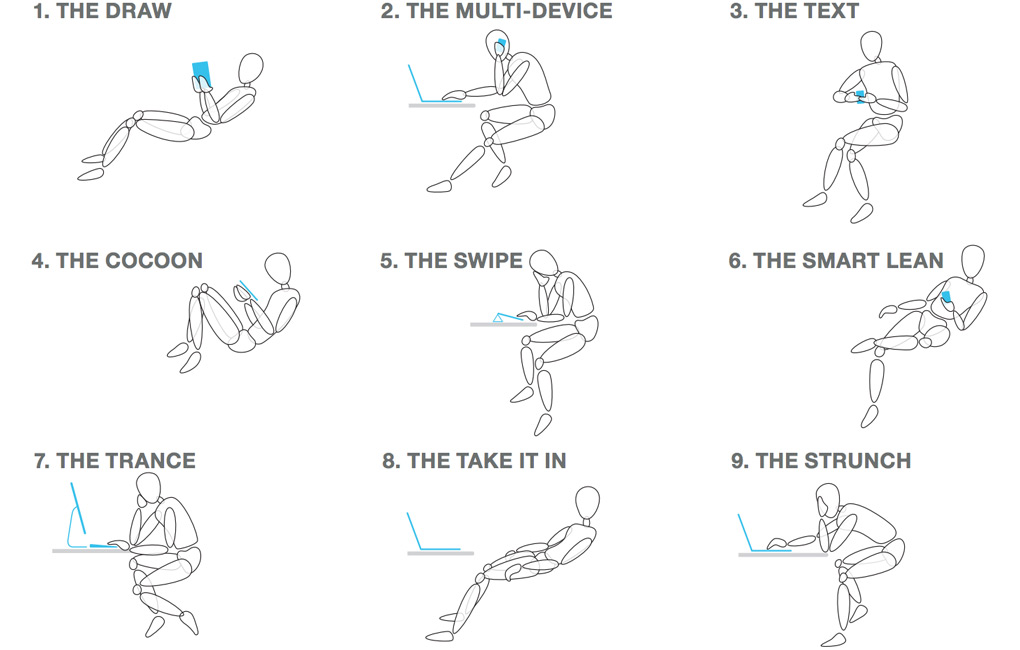 So what exactly is a struncher? It's a person adopting a "stretched-out hunch" position, typically induced by fatigue from prolonged sessions of working on a laptop. The smart lean's name is inspired by the way we use our smartphones, while the swipe and cocoon postures derive their monikers from tablet and e-reader use, respectively. Together with five other postures, these various modes of repose form a set of nine new poses identified by a global study conducted by Steelcase. In preparing to build the new Gesture chair, the company went out and studied the sitting habits of 2,000 people in 11 countries.

"What we discovered is that new technologies demand new ways of moving and working."

John Small, Steelcase's director of design, tells me he was surprised by the sheer variety and ingenuity of the positions people got themselves into while immersed in their work. What the company concluded from its observations is that we no longer relate to the work desk the way we once did: "You’re on your iPad, you’re on your computer, you’re not really engaged with the desk anymore." Whereas for older generations the desk and chair remain an inseparable whole, the modern worker is far more flexible and mobile. "Working out of the bag is a growing phenomenon," continues Small, noting that Steelcase's internal project for addressing the needs of mobile workers is dubbed "follow the bag." He then points to my laptop, precariously perched atop my backpack, which I was using as an impromptu platform. Talking to Small, you quickly become conscious of all the minuscule movements, fidgeting, and repositioning you do while working. 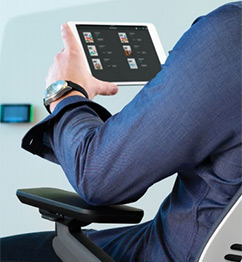 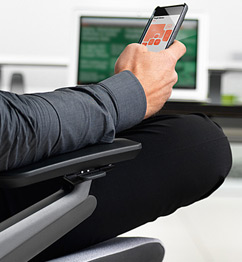 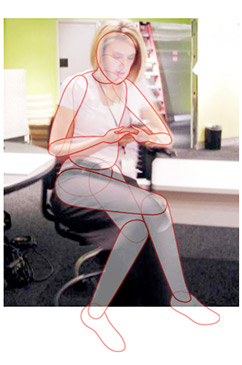 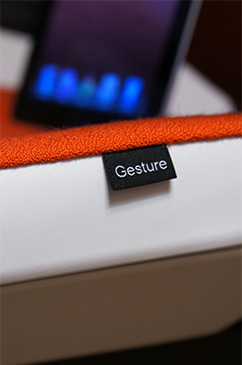 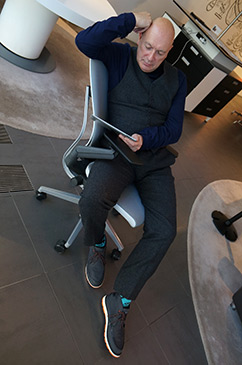 Personal electronics have infiltrated the professional realm, that much is uncontroversial, but Steelcase's study shows that people have also imported the informal and casual ways of working with technology along with their tablets and phones. The development of the Gesture chair was thus informed by the need to accommodate all the various new contortions that an iPad user might get in to.

"There hadn’t really been a product that addressed the way that people were working," says Small as he details the inadequacy of current designs to meet modern needs. So Steelcase went and did a ton of observational research and came back with a design that emphasized the need for every component to "have some relevance to the way people are working."

The Gesture chair's arms flex out in all directions and do so independently. You can elevate or lower them, tuck them in or push them out, and they even slide back and forth automatically with your arm. It's an intriguing mix of granular adjustability and automated flexibility.

Other affordances made for weirder poses include the seat itself, which is "remarkably wide" in John Small's words and has soft edges all around, allowing you to straddle the chair or sit sideways. Apart from facilitating the above cocoon pose, that enlarged seat also makes the Gesture more suitable for what Steelcase's design director diplomatically describes as users with a larger skeletal frame. The back is designed to cradle you "no matter the posture" and moves in concert with the seat to adjust to your position.

Designed to cradle you "no matter the posture"

Sitting down in the Gesture chair, I don't feel immediately transported into a brave new world of ergonomics. The rather austere fabric and plastic materials don't convey any sense of luxury, either, but the whole point with an ergonomic chair is what it can do for you over the course of hours in a day and years in your lifetime. To judge it on first impressions is equivalent to reviewing a song after hearing only a single note. I like the sliding arm rests that follow your movement, and Steelcase claims the Gesture has the widest angle of recline among chairs of its class, though I can't say that difference is immediately apparent.

It's worth noting that Steelcase isn't the first to take on the changing habits of people at work. Knoll's Generation chair, introduced in 2009, has an elastic frame designed to fit around the non-static act of sitting and similarly acknowledges the changing face of the modern workspace. Still, it's rare to see a company so openly addressing the diminishing distinction between home and office and the way that mobile technology is helping to bring them even closer together.

By meeting me in London this past week, the Strasbourg-based John Small serves as an instructive example — and a dashing model — of the extremely mobile worker his company is seeking to attract with its new chair. His entire office moves with him in the form of a laptop, sometimes a tablet, and at other times just a phone.

The full implications of the mobile tech revolution are still being explored today, with more people doing more of their work at more places than ever before. With such a radical shift toward workplace nomadism, you'd think that designing a chair for this new class of user would require a similarly unprecedented design process. Not so, says Small.

It turns out that designing an iPad-friendly chair is no different from any other — you iterate, you prototype, you test, you improve, and you keep the cycle going until the goal and the final product are as close to one another as possible. As revolutionary as the iPad may have been, and as iconic as the task of designing the perfect chair is, in the end it all comes down to doing the basic things well. 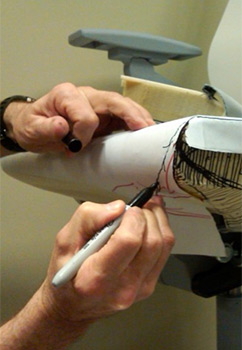 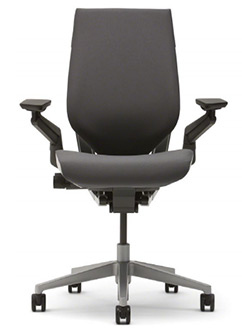