Ever since Microsoft started forcing Windows Live Messenger users over to Skype earlier this year, instant messaging on Windows has been somewhat painful. If you’re a frequent Skype user then you’ll be intimately familiar with the problems. Missed messages, out-of-sync messages, and blasts of old messages are all too frequent on the service at the moment, but Microsoft is vowing to fix the issues.

In an interview with The Verge, Skype product manager Jeff Kunins admits Microsoft is aware of the problems and is working to address them very soon. They mainly stem from Microsoft’s transition from peer-to-peer networks for Skype to cloud-powered servers. Skype has traditionally been used for voice and video calling on desktop PCs, but as the world has moved to mobile Skype hasn’t adapted its own infrastructure quickly enough to handle multiple devices. "It’s not that we’ve been trying our best to be amazing at chat for 10 year and sucking at it, it’s that we’ve been doing a great job doing what we were born to do and now people want more out of us and we’re making the investments to expand and be great at that too," explains Kunins. "We’re not there yet, but we will be."

Messages will soon sync their state across phone and PC

Microsoft is testing a number of updates to its client apps that will enable full message-sync across multiple devices, including whether a message is read or unread. Kunins demonstrated updated versions of Windows Phone and Windows desktop apps that will properly sync messages and only trigger notifications on the active device. "You’ll see us very soon begin rolling that out so users get the benefit of cloud history, synced read state across all of your devices," says Kunins.

The sync support means that notifications for messages will trigger on all devices connected to a Skype account, but notifications will only continue on the device that’s active and in use. At present notifications will trigger on all devices connected to Skype constantly, a headache for users with a Windows PC, tablet, and phone. Kunins couldn’t provide an exact date for the rollout of the improvements, but he promises it’s "pretty soon." The improvements worked flawlessly in a demo between mobile and PC, where read state was synced promptly between the two. 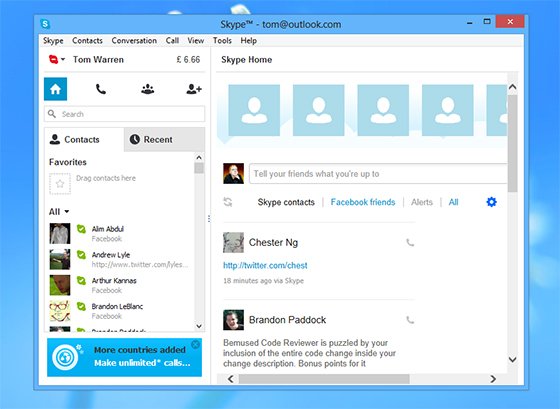 Skype also suffers from problems syncing call states, meaning some devices will continue ringing even if another device has picked up the call. While that problem won’t be fixed at the same time as messaging, it’s something Microsoft is working to fix. "That’s just a fun bug we’re working on," explains Kunins. "It’s one of those that seems like it should be trivial, but it’s actually quite hard, especially on some platforms like Windows 8 or on the web."

While improvements are on the way. Kunins took some time to reflect on the recent rollout of Skype Video Messaging. Microsoft chose to target Mac, iPhone, and Android users initially, leaving Windows and Windows Phone users without support for a couple of months. "That was purely coincidence, it looks very bad," explains Kunins. "It was just completely honest coincidence based on the fact that historically that sequence didn’t matter at all." Now that Skype is part of Microsoft, that sequence matters more than ever. "On things like that, we’ll just do a better job at when we start things," says Kunin.