Developers are eager but details are scarce

Over a million Xbox One consoles already sit underneath TVs across the world, and hundreds of thousands more will make their way into living rooms over the holidays. While gamers enjoy the latest titles, the full potential of the boxes under their TVs remains largely untapped. Microsoft is ambitiously attempting to marry TV, entertainment, and gaming to rule the living room, and it’s well positioned to do so with a Windows-powered Xbox. However, a lack of apps on day one and questions over Microsoft's approach to them leaves a big question mark over the console’s future. Apps like YouTube and Netflix are available, but developers are eager to hear how and when Windows 8-style apps will run on an Xbox One. Unfortunately, Microsoft doesn’t have many answers yet.

"I think what we wanted to do was make it easier to develop across platforms," says Albert Penello, Microsoft’s director of Xbox One planning. But in the rush to launch, the company hasn't had time to address the many issues that face any traditional app store. "There’s privacy, there’s family safety, there’s Xbox Live, the security of the platform," says Panello. "We want to make sure no one's doing anything bad with it." After facing intense criticism over the lack of indie game support, Microsoft rushed to announce the ID@Xbox program for indie developers ahead of the Xbox One launch, but details on how third-party games can be created and sold are still secured under a non-disclosure agreement. The Verge has spoken to several developers whom have been accepted into the ID@Xbox program, and some are still waiting to hear additional details and receive the units they need to start creating games. With its gaming ecosystem still in flux, it’s not clear how Microsoft will address a larger app store for the platform.

A future Xbox One store might not be what people expect

"[ID@Xbox] is going to have some influence over how we think about apps too," says Penello. "We would like to let more people create, and we have to protect the console … protect privacy." For Microsoft it’s a mixture of protecting how app developers access and use Kinect data, the certification process for apps, and even a level of curation. "Video games are great because you have a bit of a curated ecosystem," explains Penello. "The barrier to entry to be on the TV is higher." That approach to curation was established by former Xbox chief Don Mattrick, a fan of technical and production competency for TV apps. It could mean that any future app store for the Xbox One won't be as freewheeling as the store for iOS, Android, or Windows Phone, but instead be more focused on experiences appropriate for TVs. 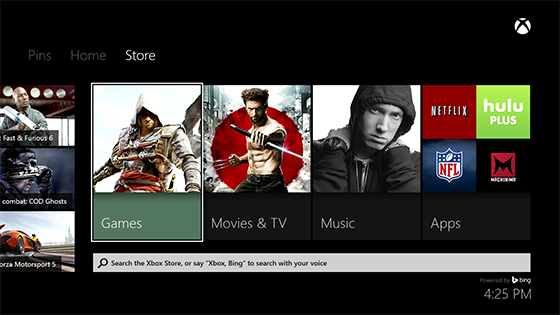 "I don’t think we’re gonna get to a point where it's gonna be like, push a button and it’s just in two places," says Penello in reference to apps across Xbox and Windows. "But I do think we’ve made it significantly easier for people to do a Windows app and that core engineering work ports over. Then it’s about, ‘is it optimized for the 10-foot experience and does it fit the requirements?’" Those requirements are still being shaped by Microsoft, which explains part of the company's reluctance to discuss its app plans publicly. "I believe we want to figure out how to make that kind of stuff happen while preserving the ‘consoleness’ of the experience," explains Penello. "I think a lot of the same thinking that’s going into the independent developer program will influence if and how we do an independent app program."

The "if and how" suggests that Microsoft isn’t even sure itself whether there will be a full Xbox One app store. Microsoft has hinted that Windows 8 apps will run on Xbox One, and technically there’s no reason why they can’t — the company has repeatedly said some apps have been ported over in less than 24 hours. The message from Microsoft is one of patience as it works to bring all the pieces together. "Now we have sit down and think, ‘let’s define what this means,’" says Penello. "It might be very simple, and it might look as if by the time it comes out, we could have just launched with that," he adds, but right now Microsoft’s focus is on the ID@Xbox games program.

This hesitation leaves the prospects for apps on the Xbox One dangling. Microsoft's talked up the idea of the One as an "all-in-one" entertainment and media system, but without third-party apps it feels like it’s in a state of limbo. Developers have proven what can be done with Kinect and Windows, forcing Microsoft to provide an official SDK. Now all of that power is sitting under a TV waiting to be used by the clever minds who have redefined apps and software over the last several years. In the meantime, Microsoft's uncertainty leaves an opportunity on the table for its competitors — one they could take up in the coming year.

Any hesitation could allow competitors in

Apple has long been rumored to be working on a future Apple TV device, and aggressive app-related launches over the course of 2013 and a recent acquisition of PrimeSense — the makers of the original Kinect sensor — all point towards a living room push. Coupled with iOS 7 support for game controllers, any real focus on the living room from Apple could prove costly for Microsoft. And then there’s Microsoft’s Seattle neighbor: Valve. Steam is prevalent in online distribution of games, and it will soon add movies, TV shows, and music to its arsenal. Valve is pushing heavily into the living room with its upcoming Steam boxes, and its distribution and gaming franchise could prove to be strong competition for the Xbox One.

Microsoft’s real challenge with apps is to capitalize on its early gains and huge potential before the competition. The company has a big head start on finally putting a modern computing platform in the living room, but everyone else is going to start running very soon.